Born and raised in Jakarta, the capital of Indonesia, I am witnessing how this city has been transformed into a centre of business. Indonesia is now considered one of the fastest growing economies in the world and Jakarta has seen massive infrastructure development and investment in luxury real estate, with less and less space set aside for agricultural activities. According to government statistics, Indonesia lost 5.1 million farmers between 2003 and 2013, and the downward trend is expected to continue.

Tosim, a farmer from Kebon Bayam, in his vegetable garden during the dry season. The water channel to the garden was cut off by developers.

In the early 2000s residents of Kebon Bayam in the northern part of Jakarta, converted a plot of wasteland into a vegetable garden - in time becoming known as the Spinach Garden Village as they supplied spinach and kangkung (water spinach) to local markets around Tanjung Priok. As they developed the land and project, community leader Muhammad Furqan had a dream to create a place of conservation for different spinach varieties. With the rivers polluted, they created a water drainage system that would convert the dirty water so it could be used for their daily needs. The recovered land soon became some of the most fertile land in north Jakarta. Their village also developed and became home to 535 families - a thriving community. Neneng, one of the farmers told me: “If we want to eat any vegetables that are not grown in our gardens, we only need to ask the neighbour and pick them from their garden. That’s what we usually do, exchange vegetables as needed.”

The Jakarta International Stadium began construction in 2019, and most of the garden land was lost. Most of the villagers have gone, although a few still remain. Muhammad, one of those who stayed, tells me that that the access road to the village has been destroyed, water and electricity have been cut off, and the water run off from the stadium’s raised concrete base frequently floods the villagers’ homes.

Jakarta faces many challenges - as a result of excessive groundwater extraction parts of Jakarta will sink within the next 10 years, and rising sea levels will also impact Jakarta and other cities and areas of Indonesia – and the increased development has seen people shift away from farming into industry and services. Tosim, another Kebon Bayam farmer, told me: “Here in Indonesia, farmers are like villains. Everything is made difficult, the land is taken, the houses are demolished. What if farmers stop planting? What will people eat?” Before the Jakarta International Stadium began construction Tosim and his family had already had to move four times and with each move their home and vegetable gardens that they had been working on and improving were destroyed as the lands were developed.

Kebon Bayam - when fertile land makes way for infrastructure and the developing economy. 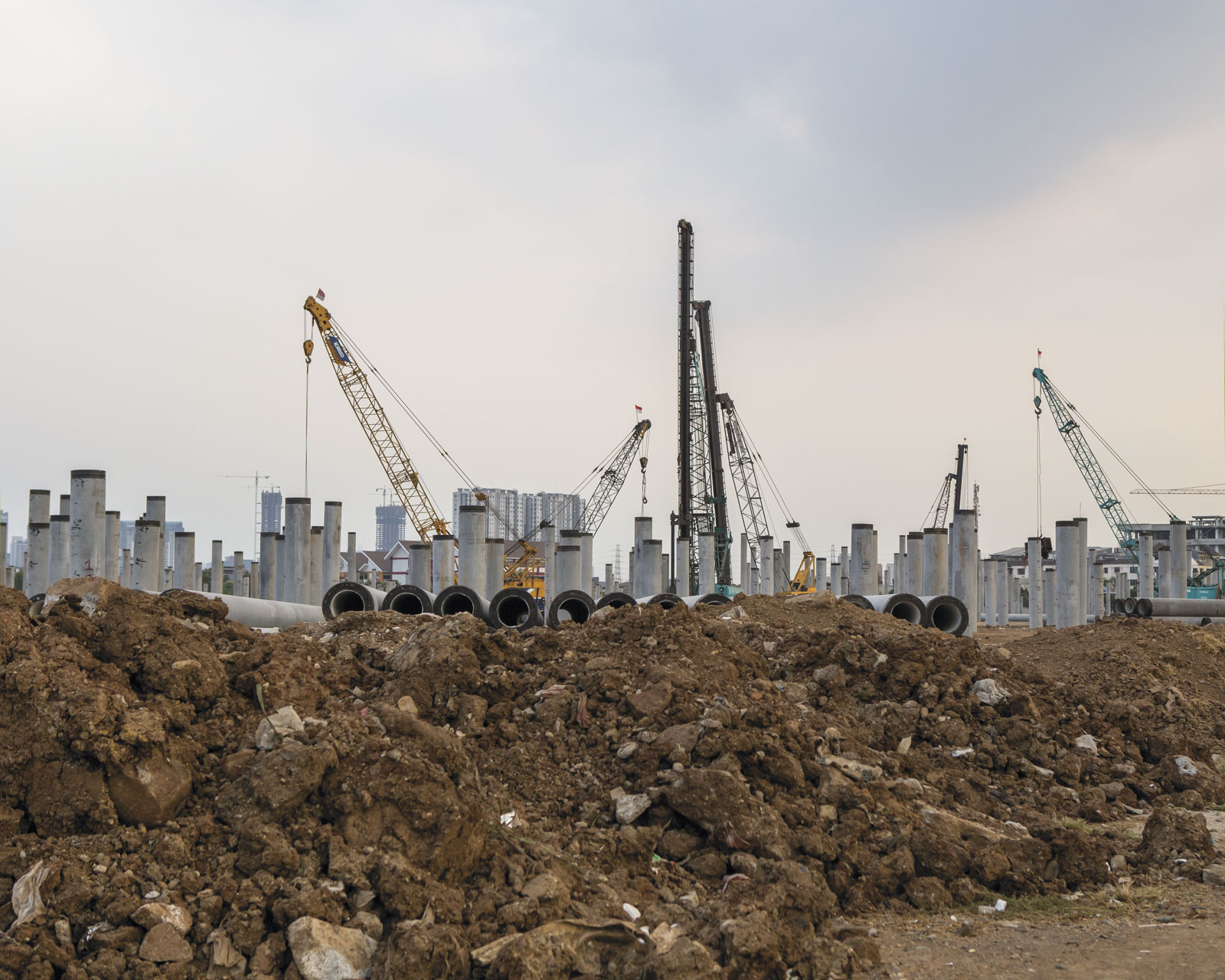 Tosim, a farmer from Kebon Bayam, in his vegetable garden during the dry season. The water channel to the garden was cut off by developers. 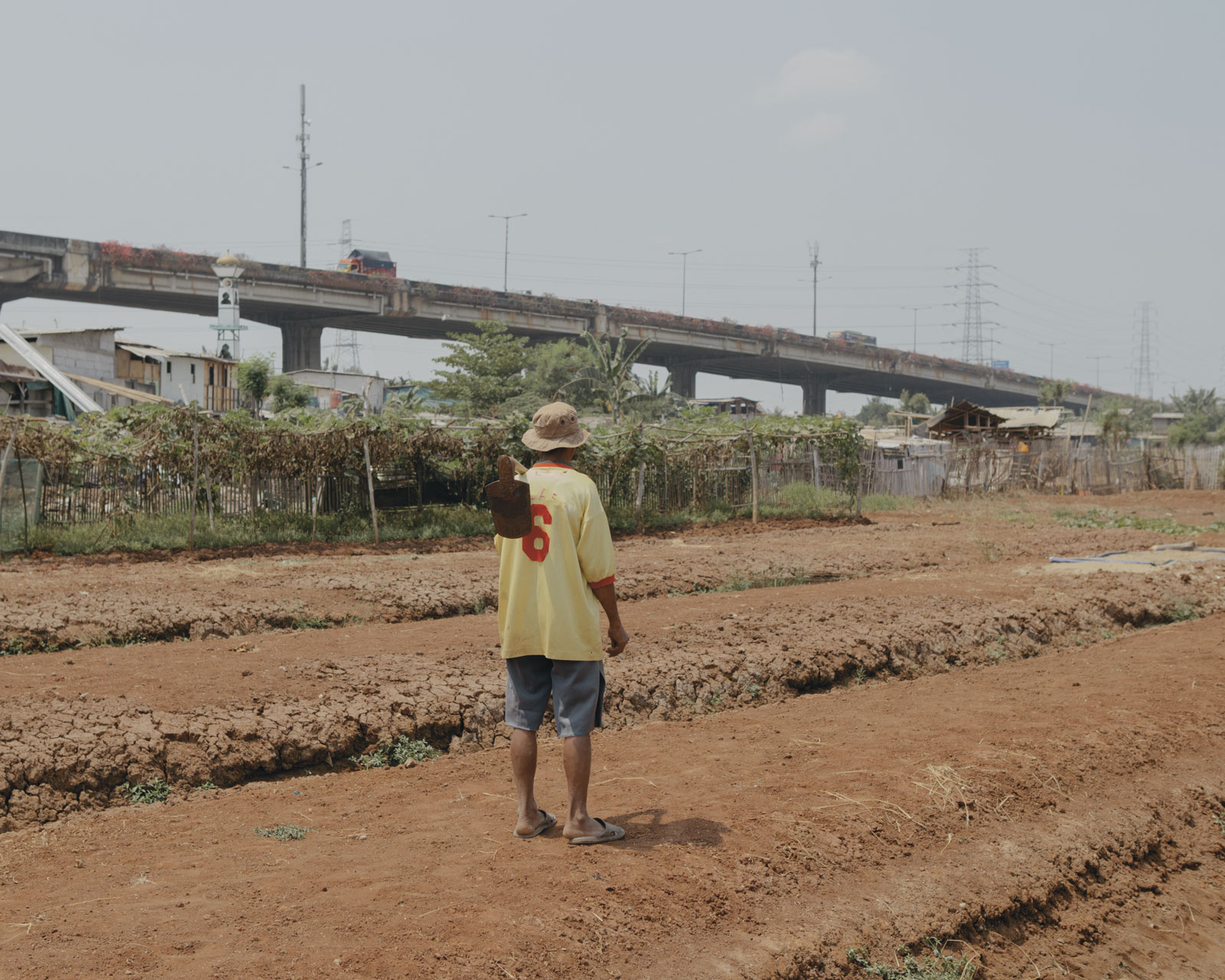 Community leader Muhammad Furqan in the lands of Kebon Bayam. 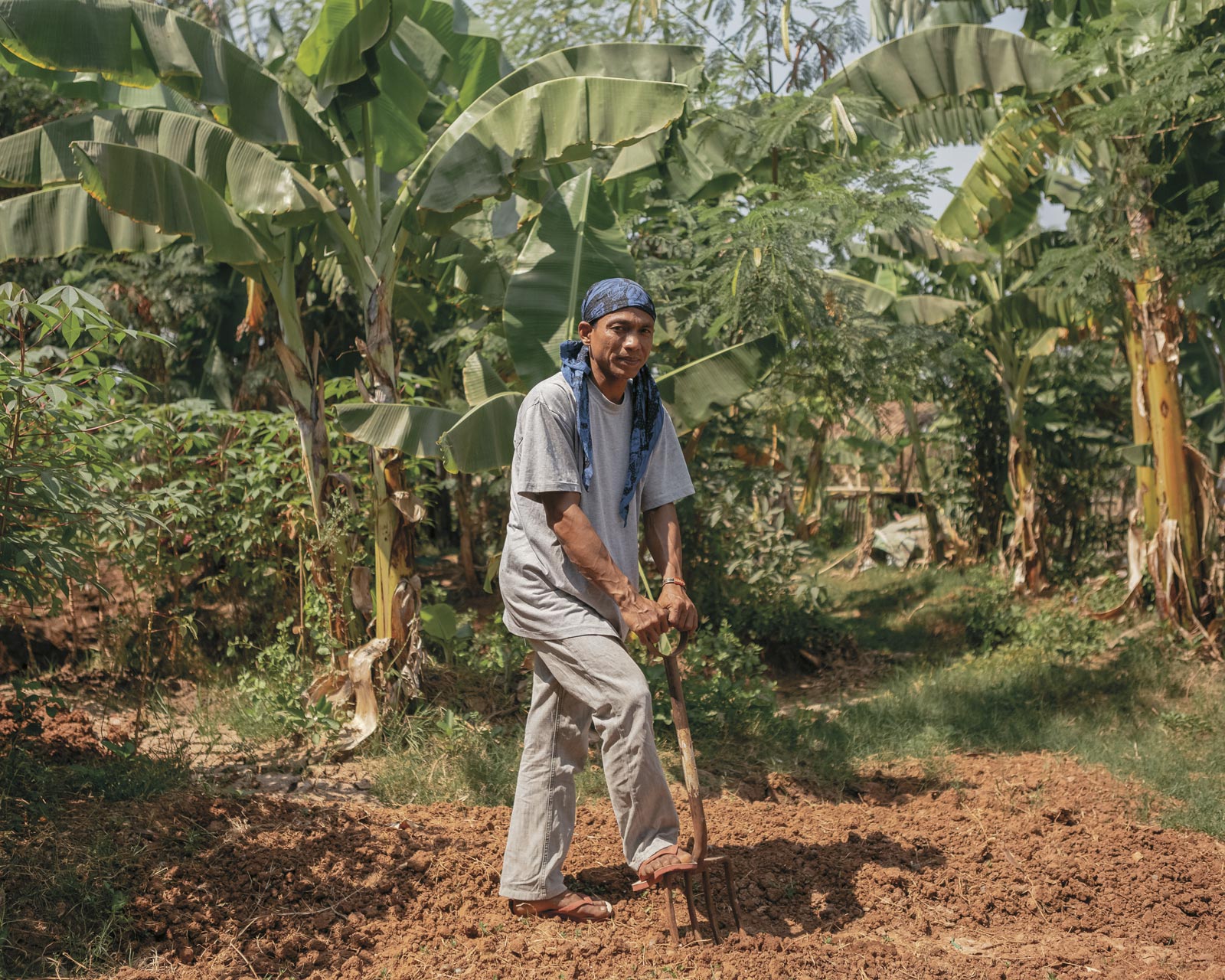 Some freshly picked spinach being washed in Kebon Bayam. 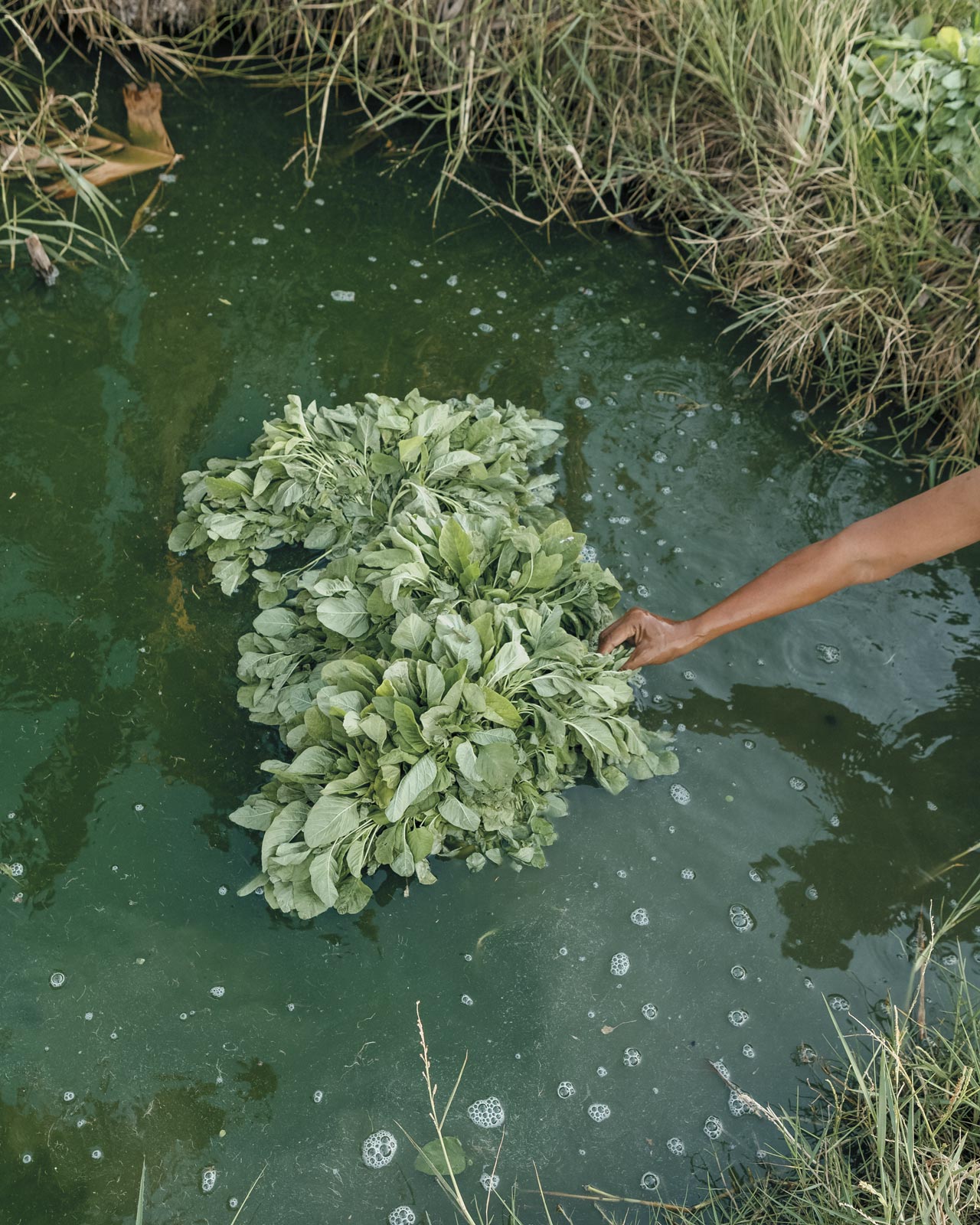 The Jakarta International Stadium under construction. The Kebon Bayam lands were all but destroyed, while neighbouring garden Kebon Seng is still thriving. 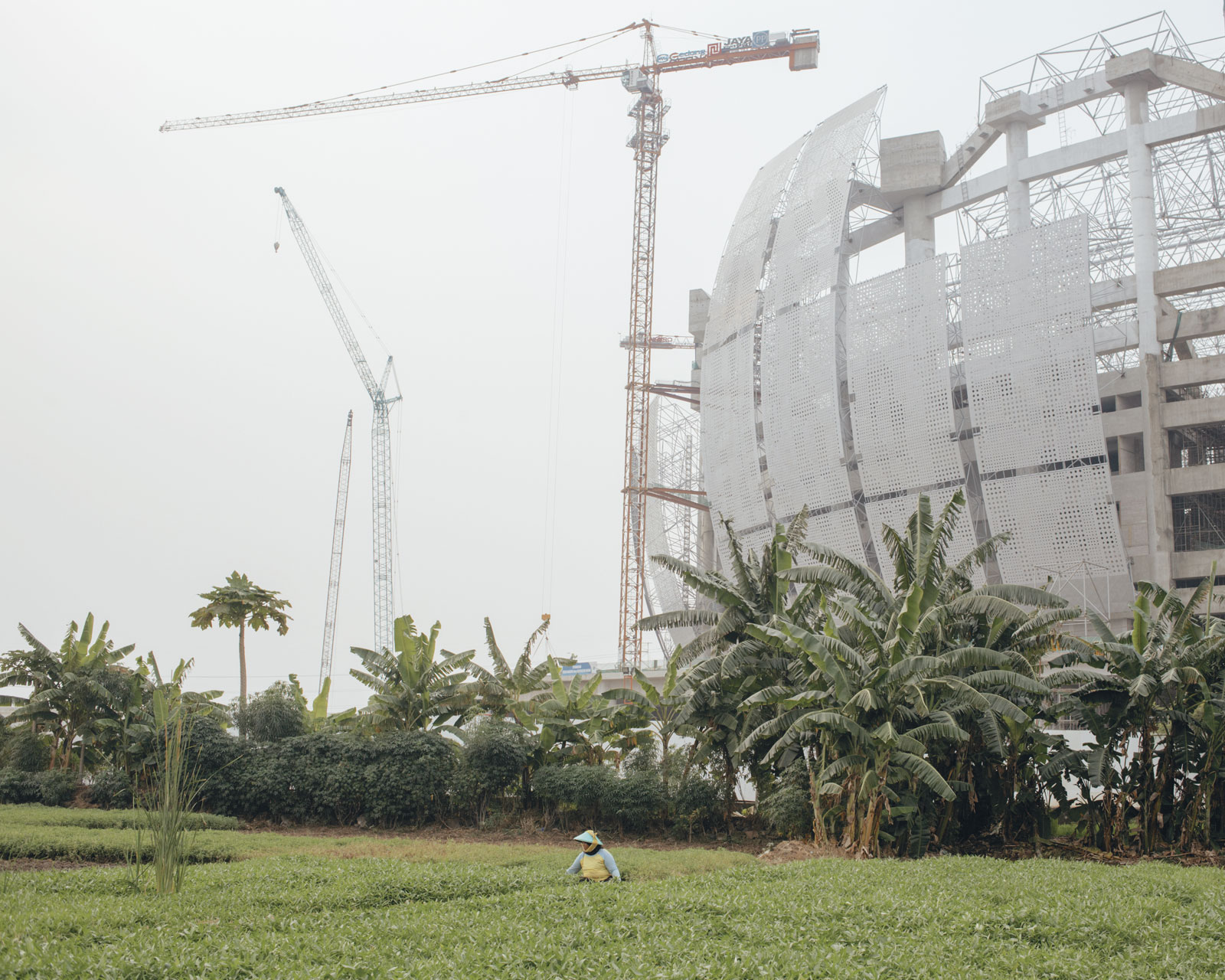 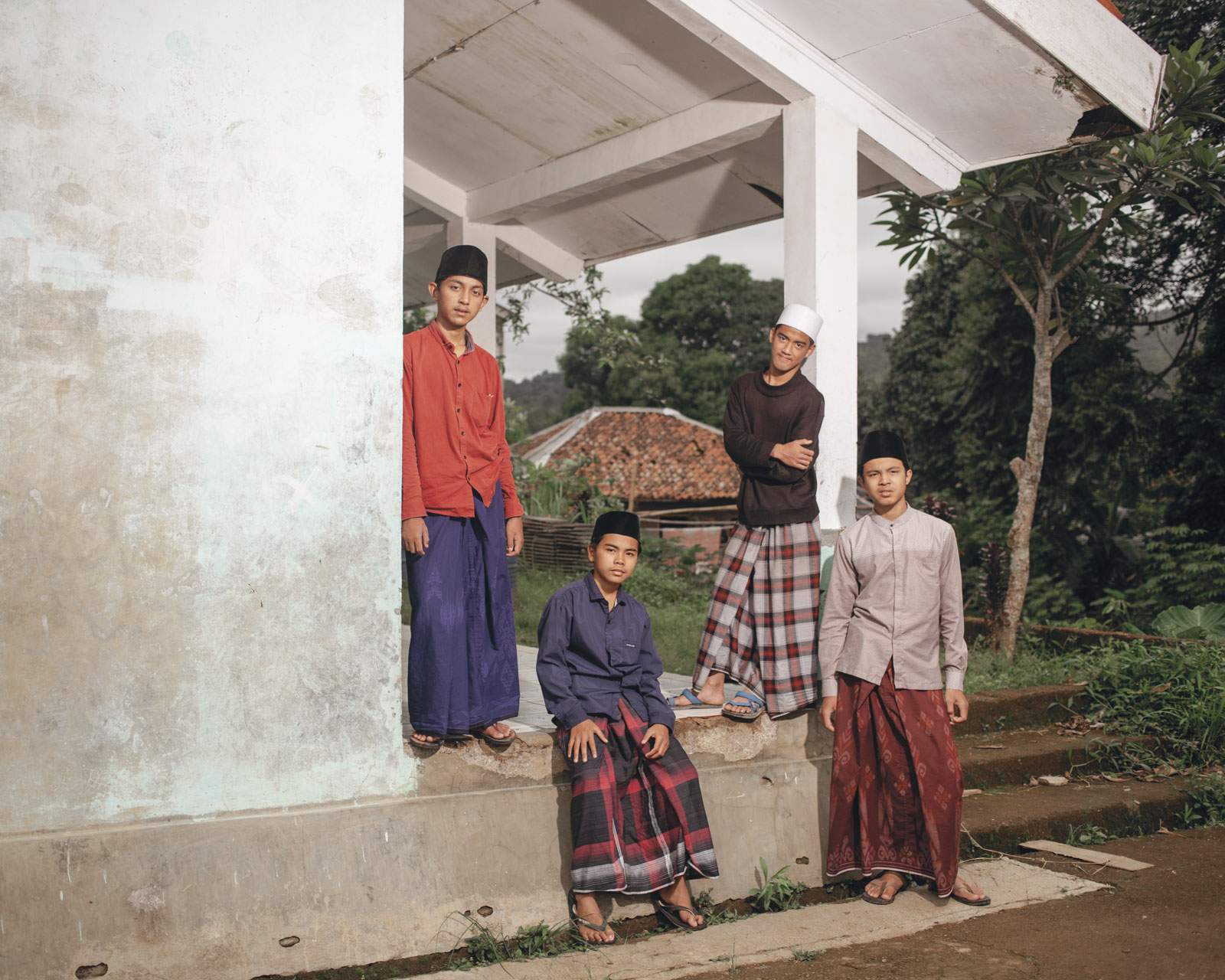 Azka planting seedlings. The boarding school is located in the highlands, and the cooler weather is ideal for growing vegetables. 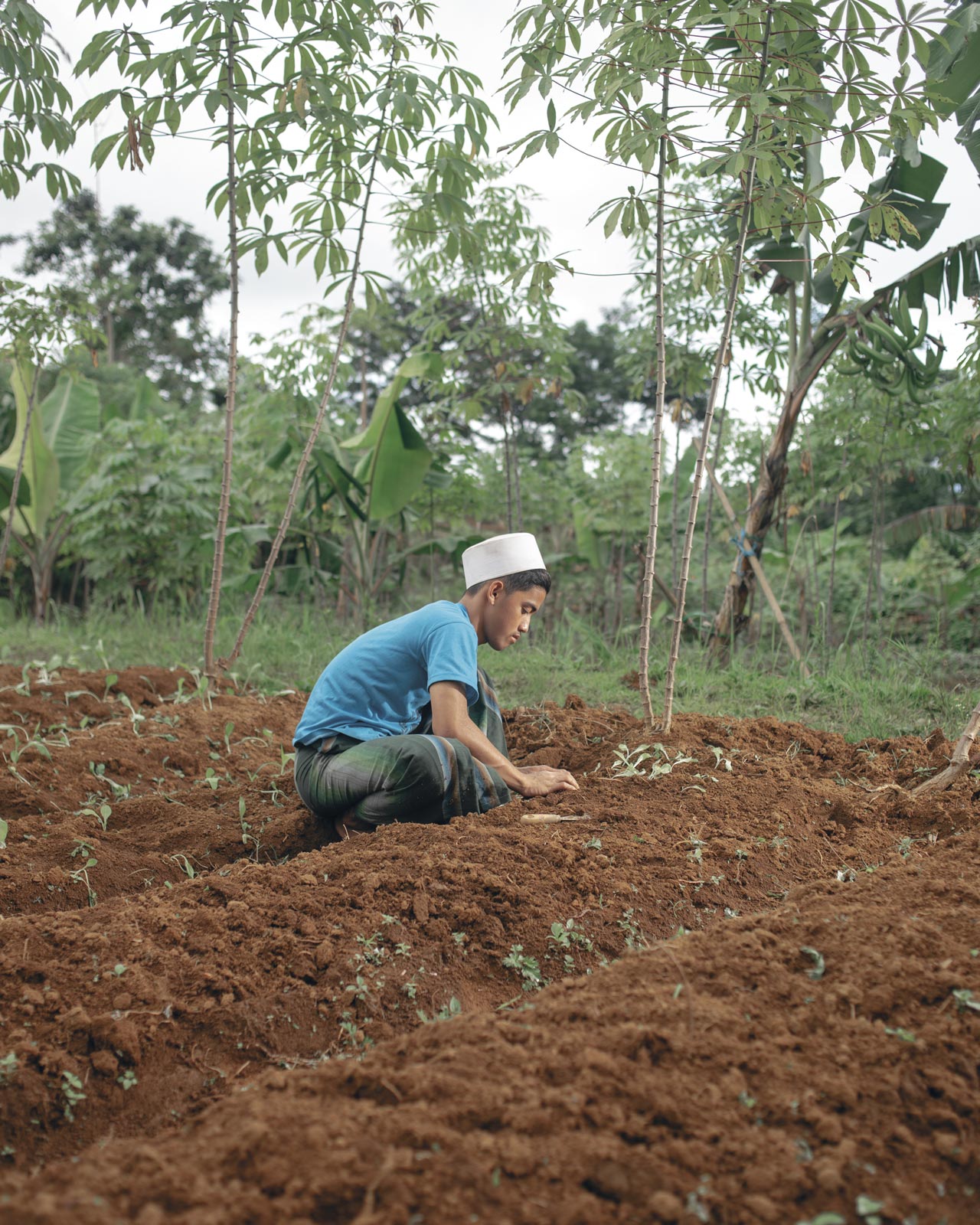 Raksa, one of the volunteers from Work Ti Farm, helps the students with agricultural practices including soil preparation, making organic fertilisers, and seed knowledge. To ensure food security Work Ti Farm recognises that it has to empower the youth. 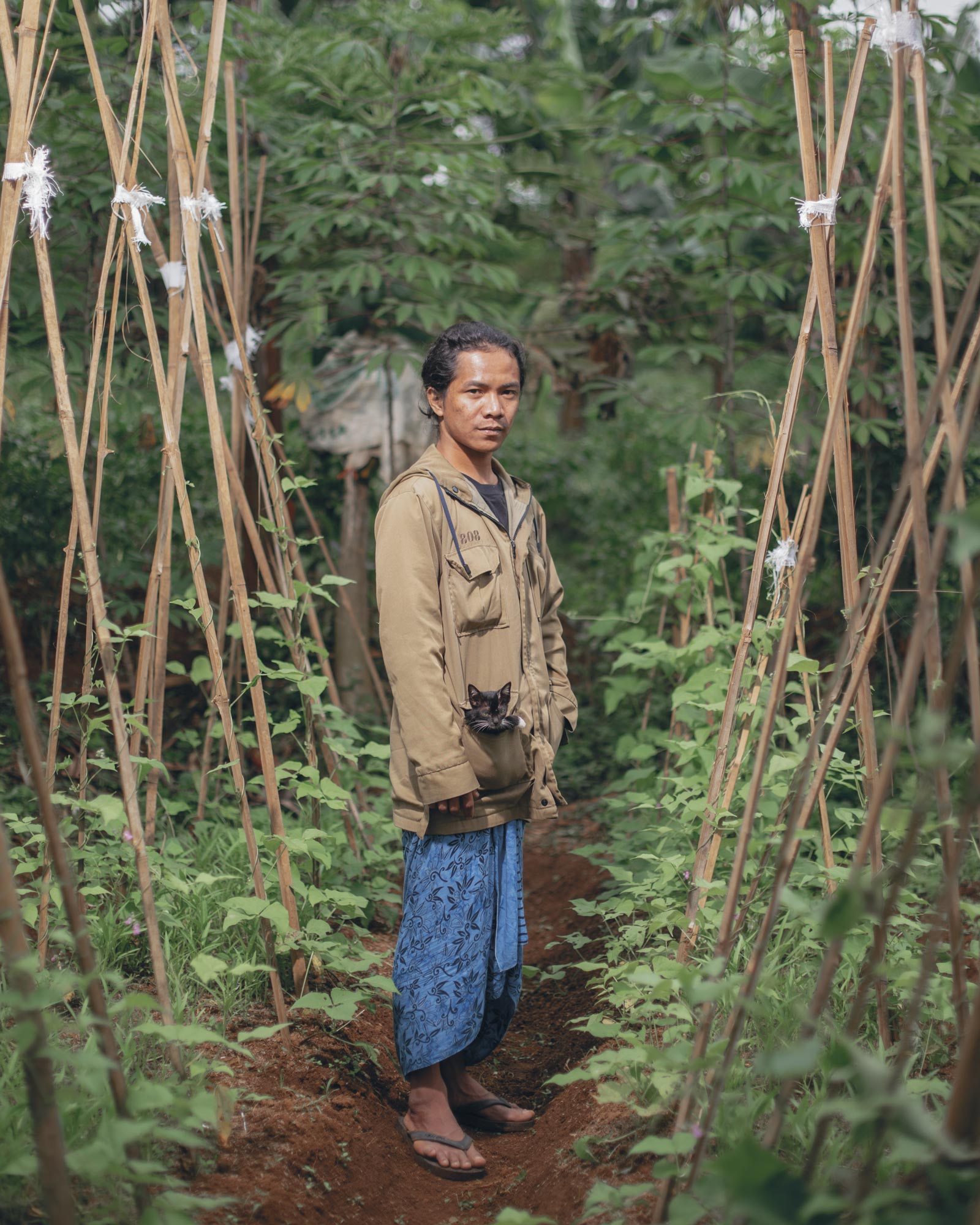 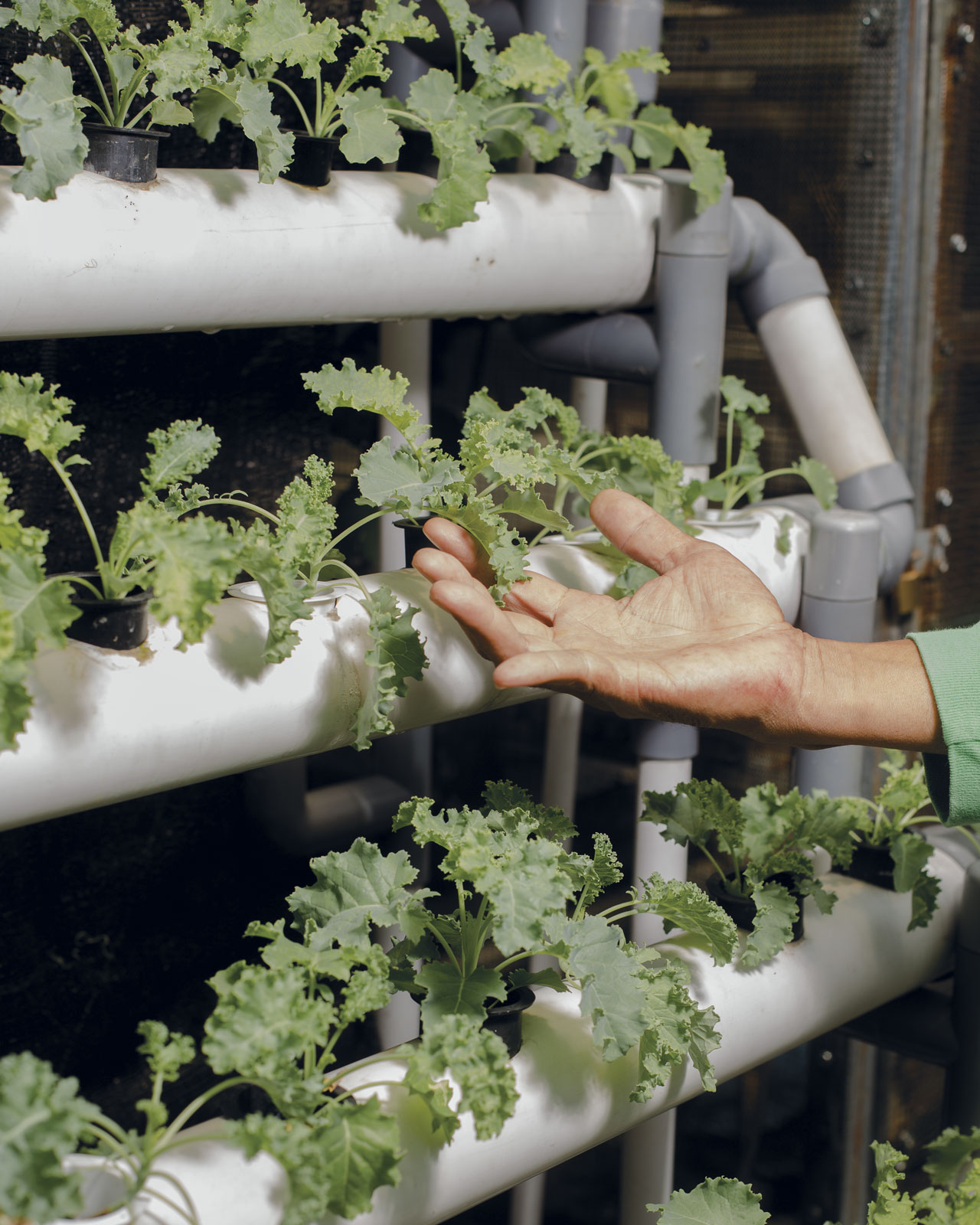 Kurnia, a retired civil servant, and her husband Wano in the middle of their red ginger garden. 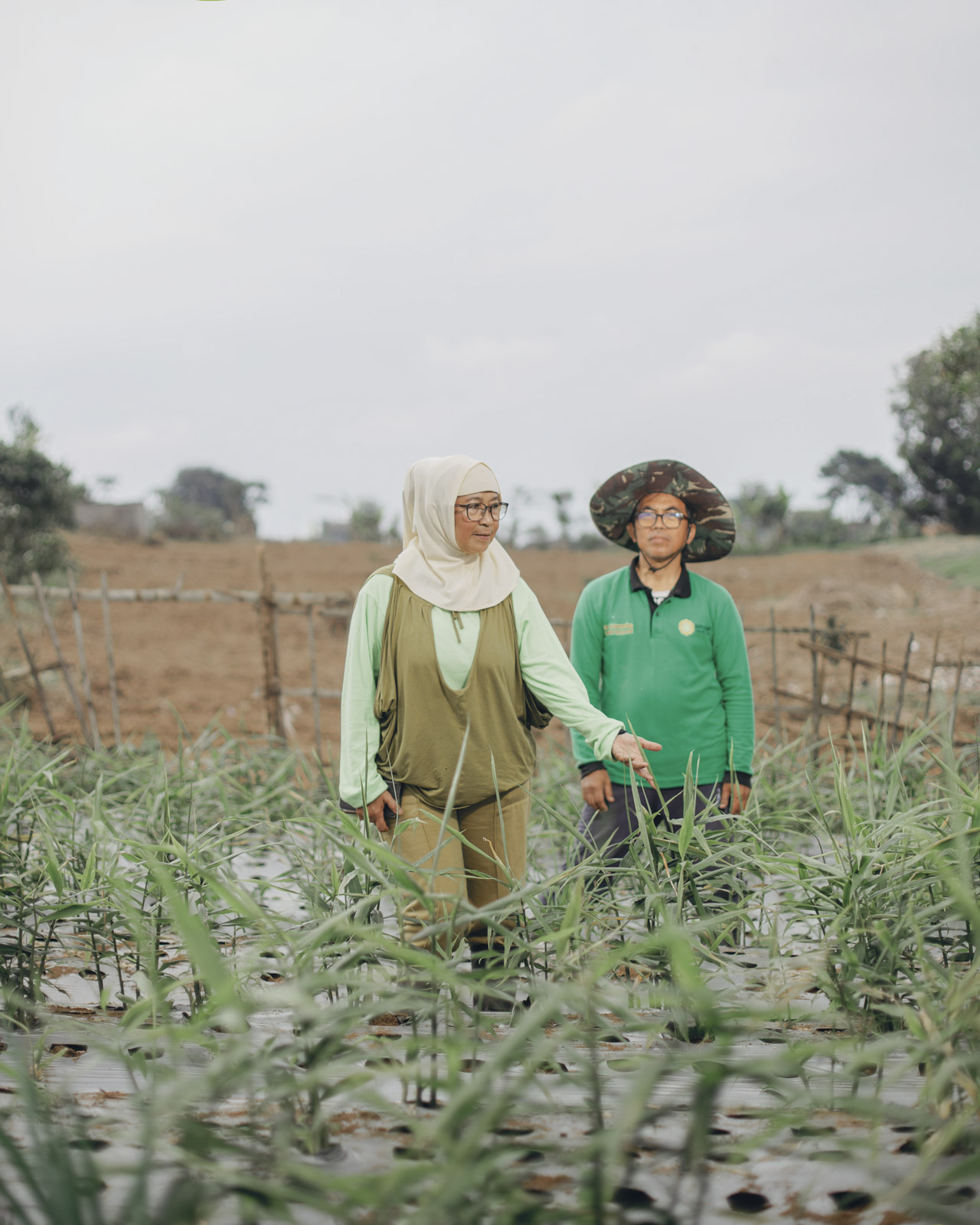 Farmers resting for lunch in West Lampung, Sumatra. Most farmers don’t own the land they farm.

When the pandemic struck and Ifrialdi lost his city-based job, he began farming his neighbour’s paddy field in Sumatra. 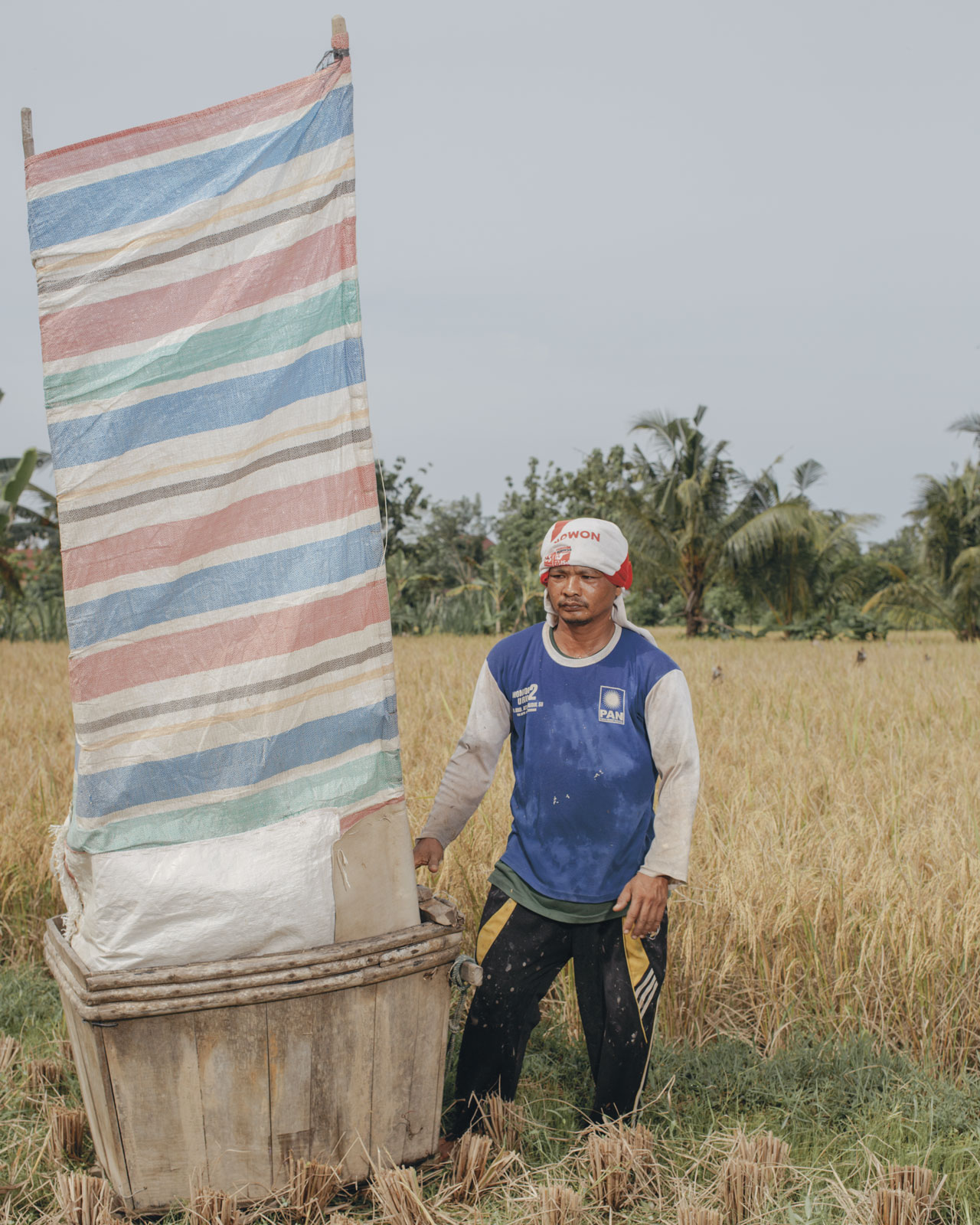 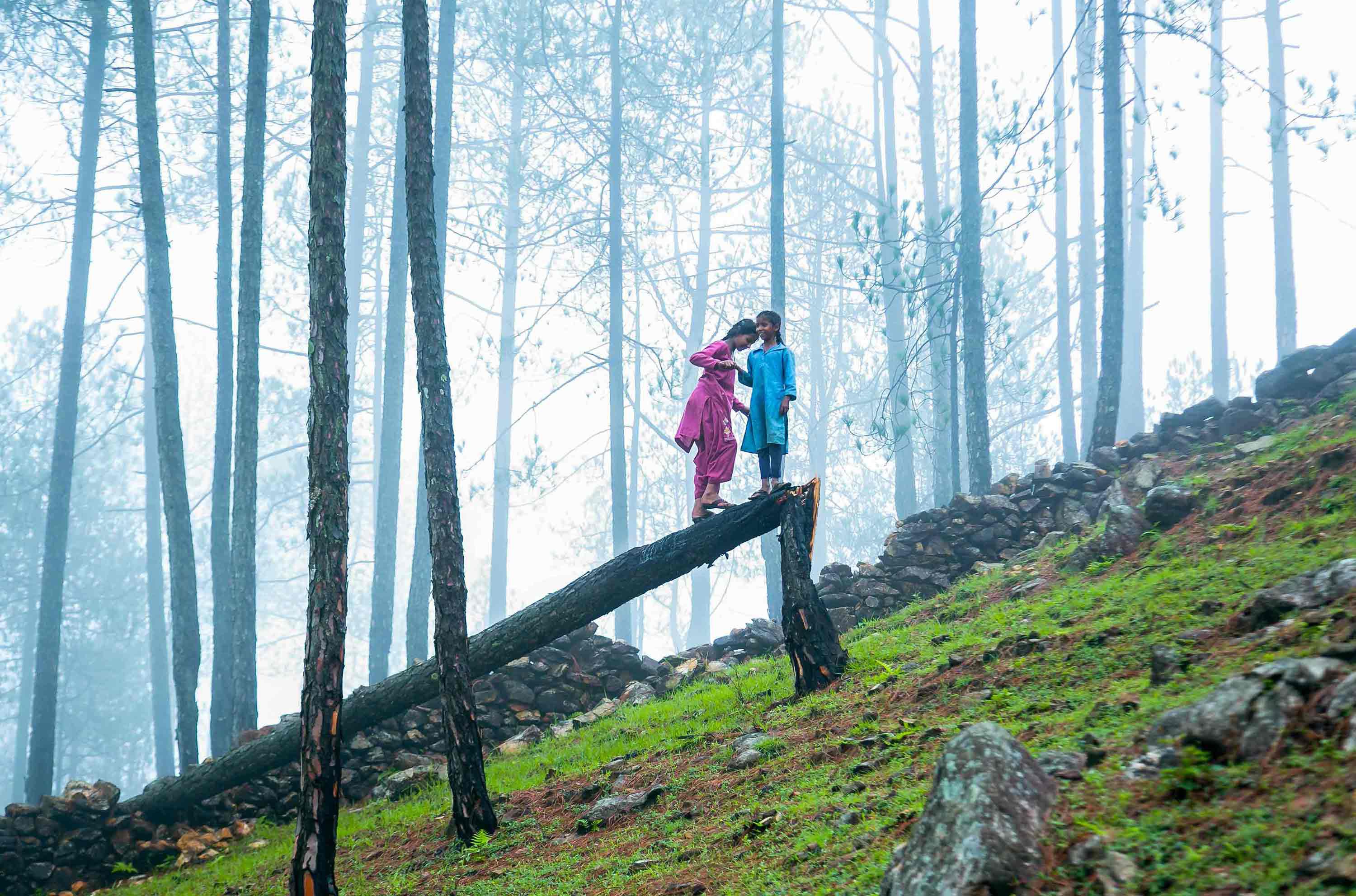 In (our) Nature
Words and photography by Atikah Zata Amani 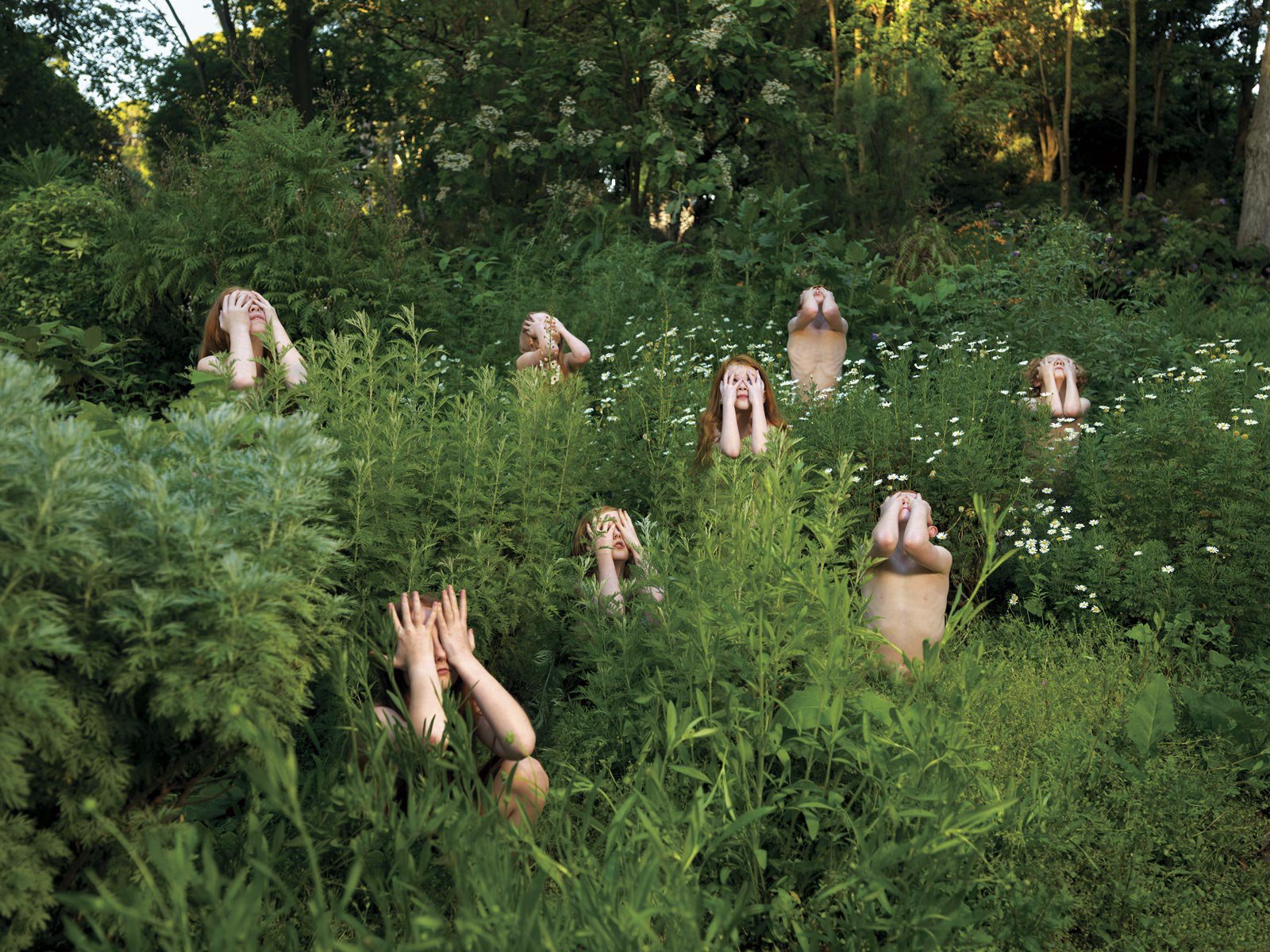