Words and photography by Liliana Merizalde

Inner Disruptions is a project with women from different communities and ethnic groups from Vaupés, Colombia. They are women who have endured estrangement from their traditions, forced displacement from their land, and violence caused by armed groups, alongside many other forms of everyday hardship. But they have transformed such situations into the seeds of reinvention.

After getting to know them and their life stories, we constructed a prosthesis for each woman, which extends, limits, covers, outlines or highlights their bodies or one of its parts. In this way we transformed objects into symbols of pain or loss, material manifestations of their suffering and strength. We then created a series of photographs in which we worked together all the different elements of their lives and stories.

I was interested in getting to know them deeply and making a collaborative portrait that truly reflected who they are and what they have lived. I don’t believe in arriving, taking a picture and leaving. I think that a photograph is something that you build, not that you take. It is important to me to know the people with whom I want to undertake a documentary project, and to build it with them collectively.

The word prosthesis is usually used in the medical context. It is seen as an artificial device placed or implanted in the body of a living being to replace an organ or limb. However, it is possible to understand this concept in other contexts, such as the artistic one: sometimes what we need to replace is not physical or material, and these objects can also symbolise other needs.

The prostheses were built in and around the town of Mitú, in different communities along the Vaupés River, which is also where the pictures were taken. The materials used were mostly organic or found exclusively in the region. The construction and development of the prostheses was carried out with artist and industrial designer Cristina Borda. The project’s production and art design was made in collaboration with Donal Edward Arango, a local artist.

Doris is 35 years old and has three children. She is of Kubeo origin and belongs to the Vacurabá community, at the source of the Cuduyarí River. She is a housewife and a farmer, she works in the chagra (vegetable allotment) growing yuca and in the kitchen cooking quiñapira (spicy fish soup, traditional in the region). She loves living by the river. Doris feels conflicted towards education as her job as a mother and a wife has left her no time to finish her studies, despite her efforts. Moreover, she can’t avoid associating education with a terrible memory: in 2008, one of the illegal armed groups recruited her younger sister Virgelina, who was only 16 years old. They hijacked her from school along with 13 other kids and nothing has been heard of them since. Doris’ husband is a teacher.

Together with Doris, we decided to work on her right arm, being the one she uses when writing, and to build something that both spoke of the powerlessness she feels but at the same time, highlighted the beauty of her being.

Eloida is 47 years old. She was born in Puerto Pupuña, in the Medio Vaupés, and she belongs to the Kubea ethnic group. She doesn’t like to remember her name in her native language. More than 15 years ago she lost her daughter of only one and a half years of age. Since then, Eloida has been living with her mother, her brother and his family in the 13 de Junio community, near Mitú, on the opposite side of the Vaupés River.

With Eloida, we decided to work on her womb as a symbol of her loss and as a starting point for her own process of reinvention, which has led her to move and to redefine herself. Eloida currently runs an independent business selling sweets in a native market in Mitú.

Sano is 68 years old. She belongs to the Tuyuca ethnic group and was born in the town of Acaricuara. Sano has lived with her husband Diapo, of the Bará ethnic group, since 1976. They communicate with each other by using their respective mother tongues. They left Acaricuara 25 years ago and arrived in Mitú in search of work and education for their three children. One of the things that hurts Sano the most is the loss of their traditions and the violence perpetrated against the beliefs of her townsfolk.

She misses the wii pariwii, the Tuyuca name for the maloka, the communal house that serves as a ritual centre and sacred place for many Indigenous communities. She is afraid of the jaguar because, according to her, it eats people’s heads and because often enemy payés (shamans who look for equilibrium between man and nature) adopt this animal´s shape. She had cysts in her ovaries and had surgery on her back. Despite all of this, she says as long as her arms remain strong and allow her to work, she feels fine.

Together with Sano we decided to work on the polarisation between land and air, as she is a woman of the chagra, strongly tied to her tradition. She nevertheless feels trapped, as the land she works does not belong to her or her community, and she would like to remove herself from this situation in order to gain larger freedom.

Sená is a 58-year-old woman who describes herself as someone without a will to live. She has womb cancer and she has always been sterile. She wanted to have children so she adopted a girl and two boys who no longer live with her. She currently takes care of an old woman and cooks for her, but she can no longer go to the chagra, her favorite activity, due to her illness. She feels bothered by dreams and says that if life were different, she would think positively, have a social life and stop being disillusioned about everything. She would like to be a healthy woman and she sees sickness as a constant punishment that she cannot understand.

Communicating with Sená was complicated, as she is a quiet woman and speaks Tuyuca. Despite her saying otherwise, her eyes spoke to me of hope. For this reason, we built a structure around her body, a kind of nest, a primary place of reinvention.

I met María Magdalena in the mountains. Her 60-year-old feet walked swiftly and with precision. She carried a basket filled with yuca brava (a type of yuca that is cultivated in this region and contains a poison that is lost in the cooking process) hanging from her forehead, and with her arms she carried another one full of produce from the chagra.

As I tried to catch up with her, she told me she belonged to the Desana ethnic group and that she was the daughter of a dancer and payé who whispered her ethnic name in secret. Her father died when she was 10 years old. At seven months of age, the priests took her out from her community and burned everything down, including traditional suits and the maloka itself.

“My grandparents died of sheer sadness,” she told me. She grew up with missionary nuns near Brazil and belongs to the community of San Luis de Virarí. Her husband belonged to the Guanana ethnic group and died nine years ago. She only has three children because the fourth one, a community leader, was murdered in Boca de Ararás, a community that is three hours’ small plane ride and 40 days rowing away from Mitú. 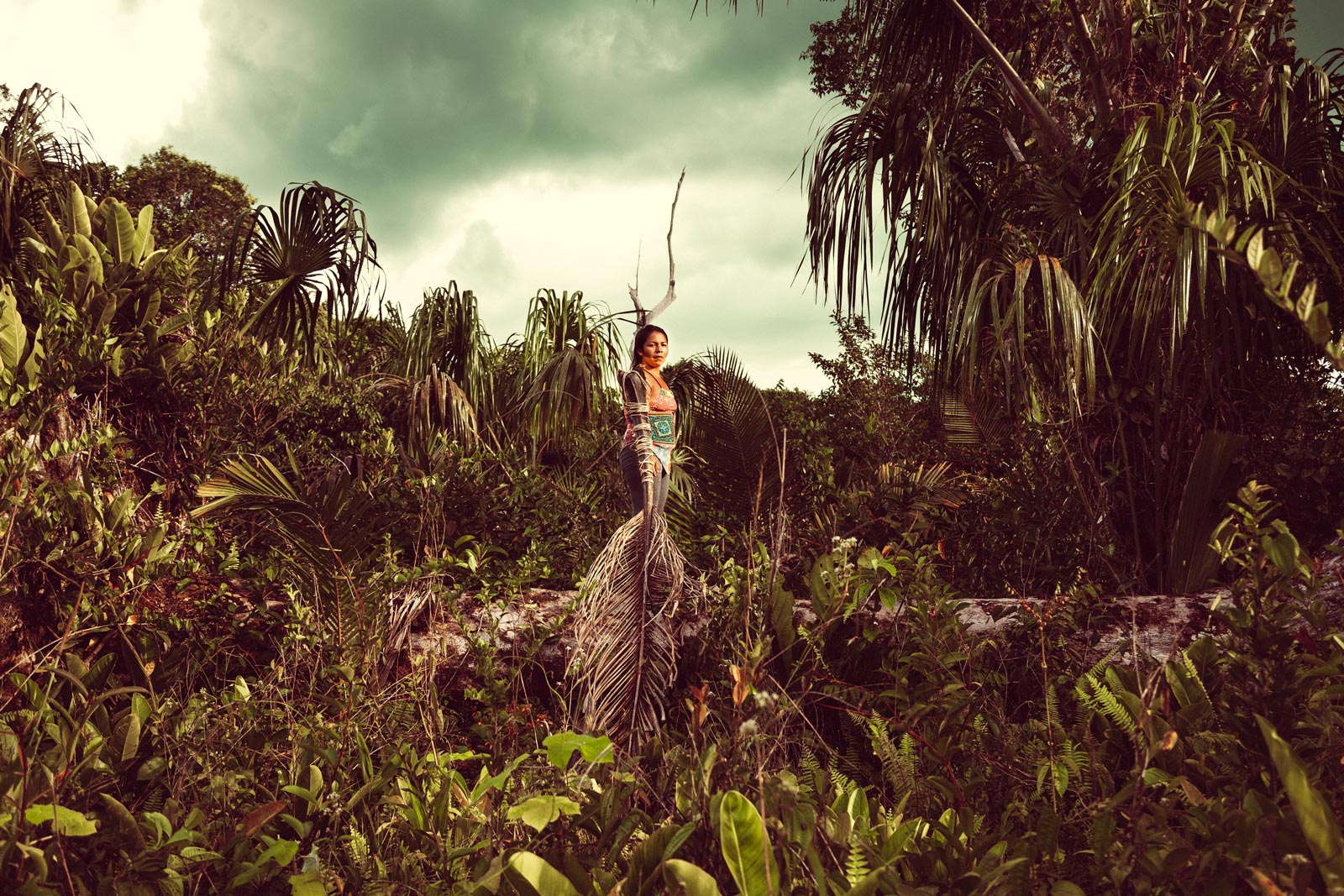 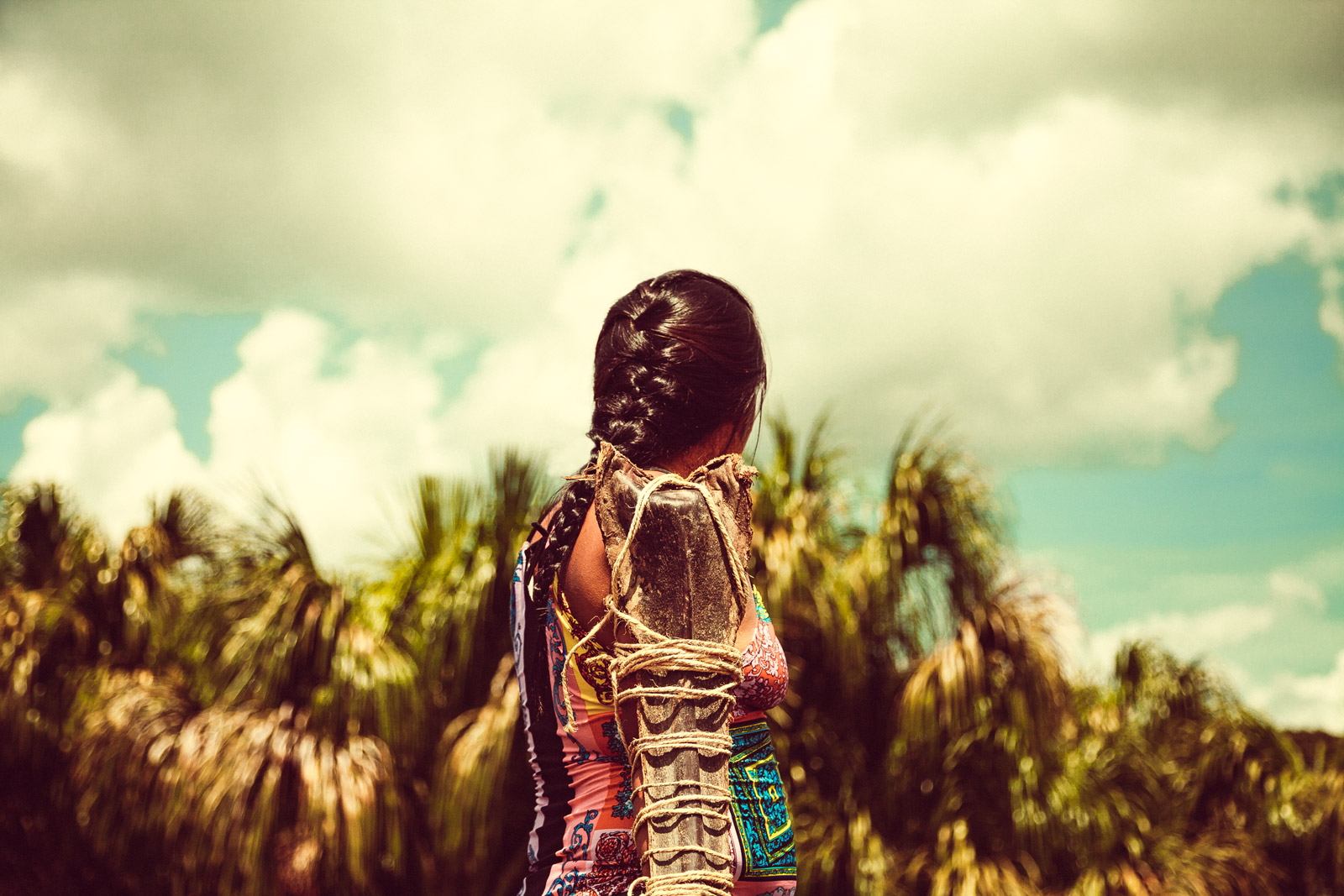 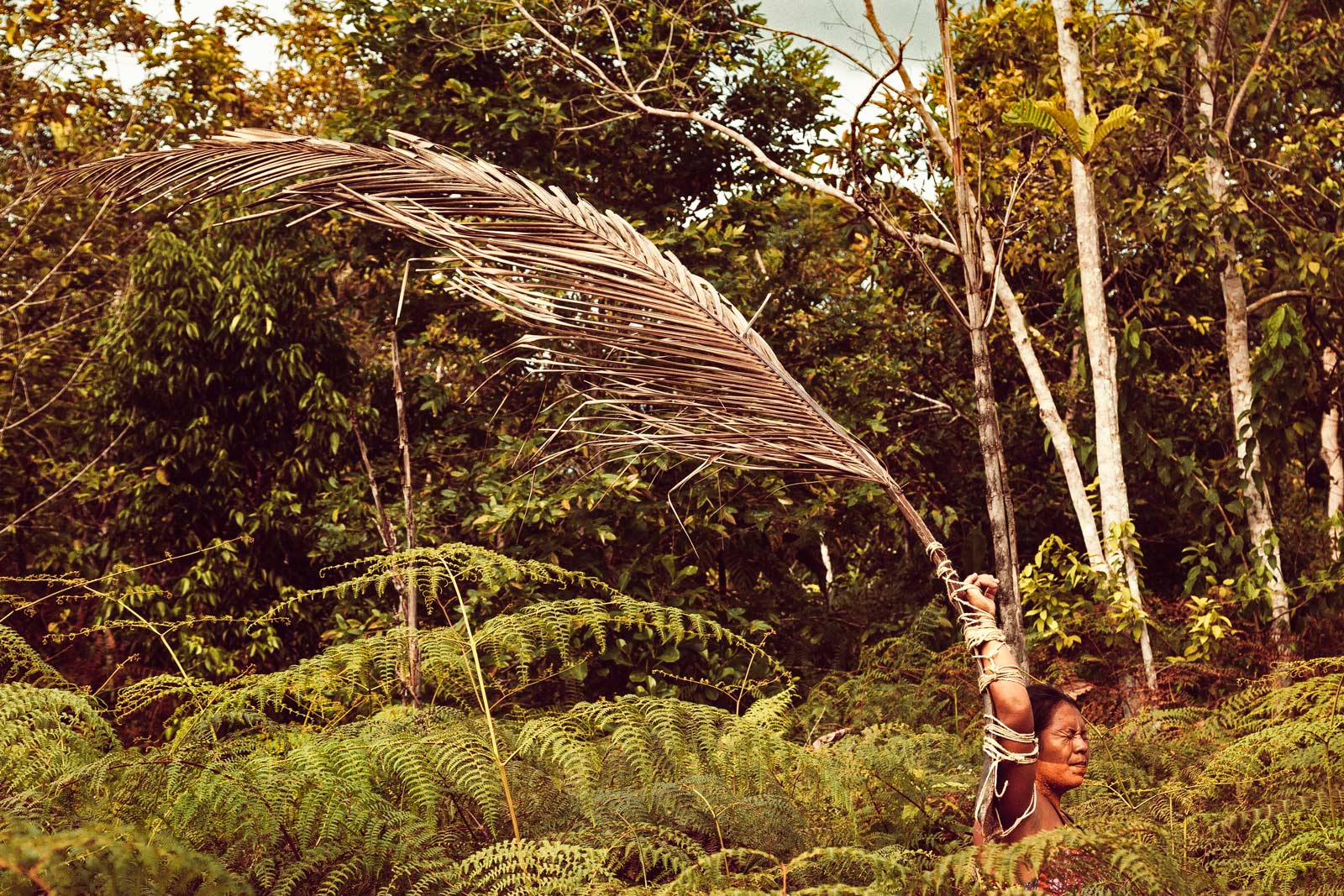 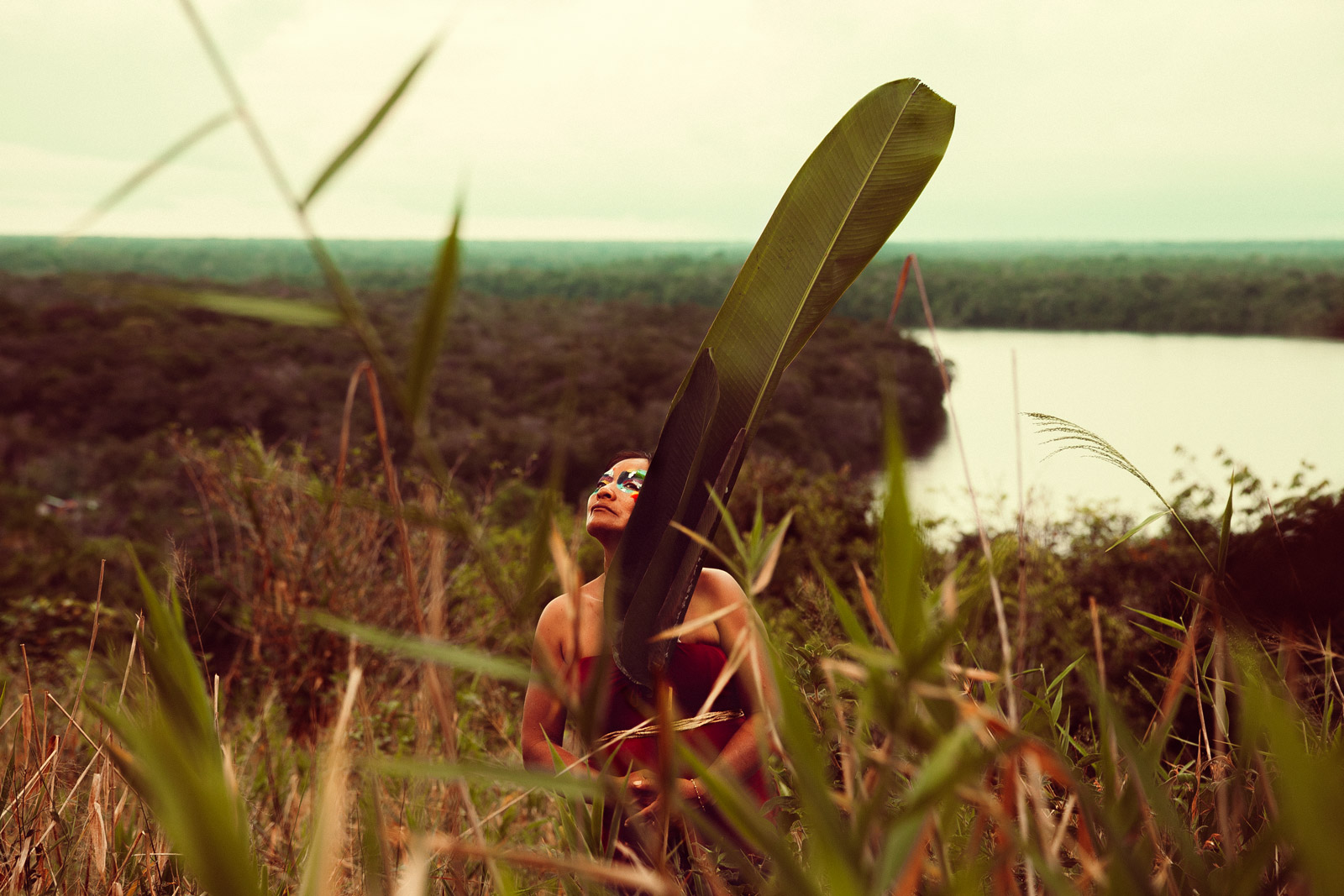 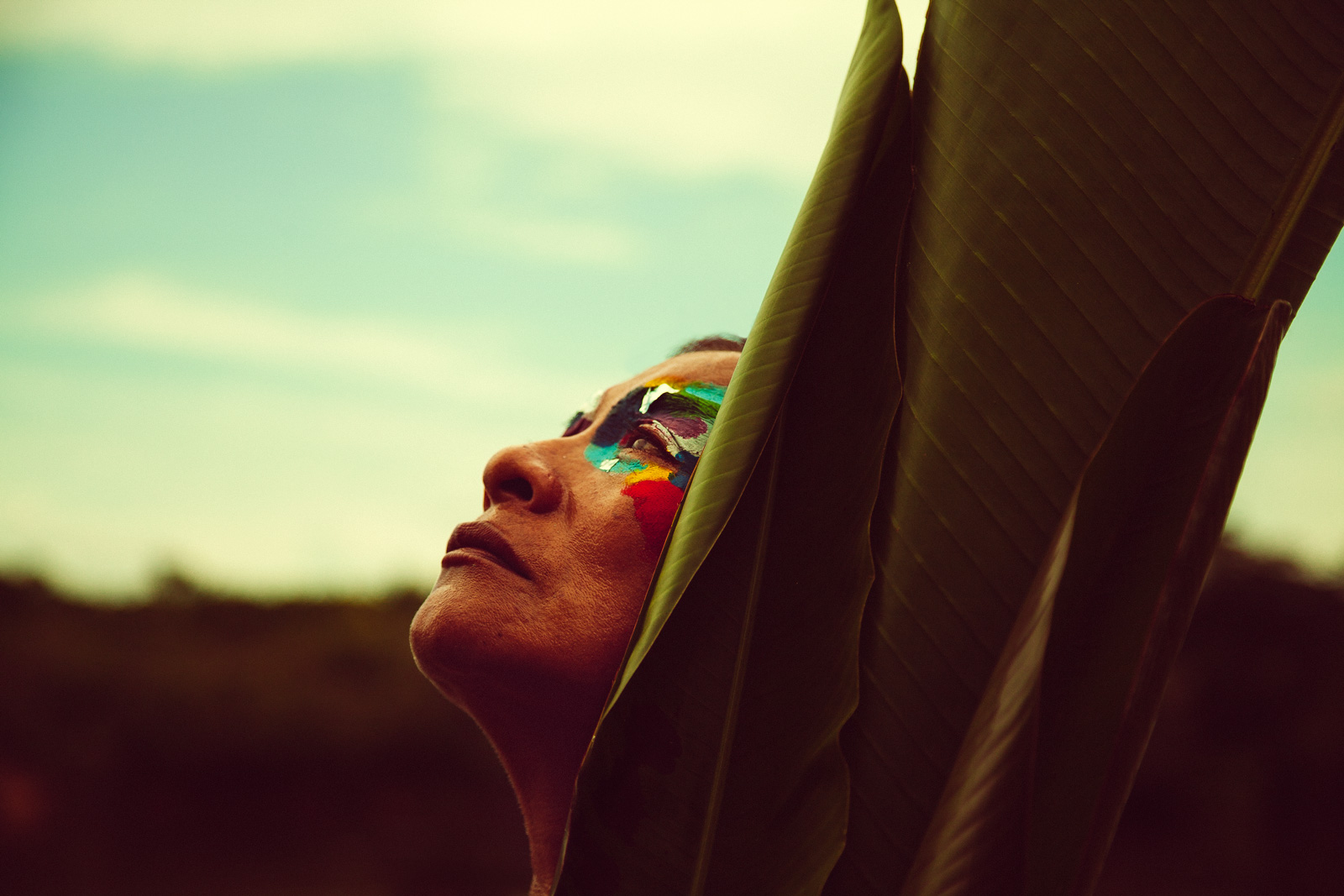 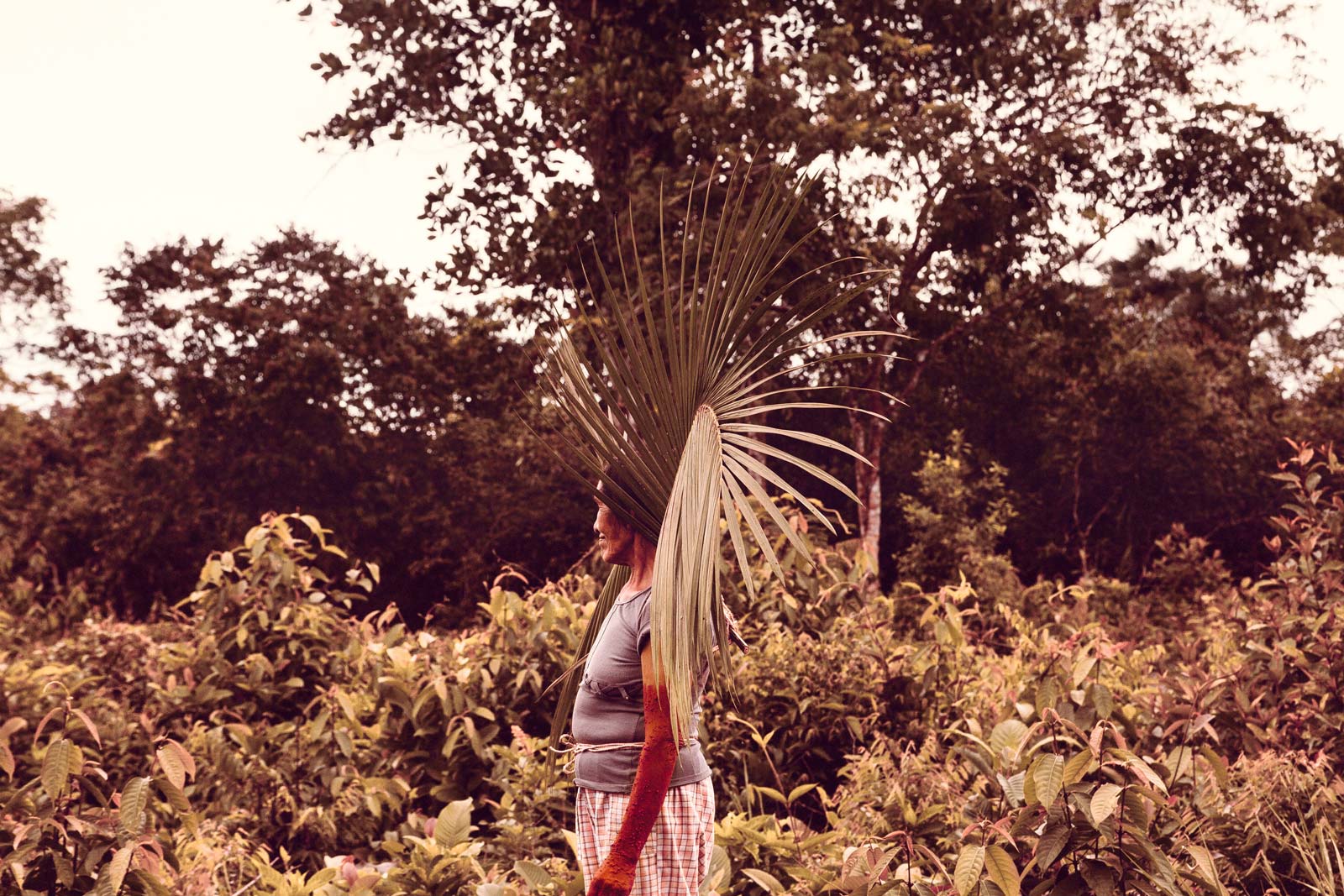 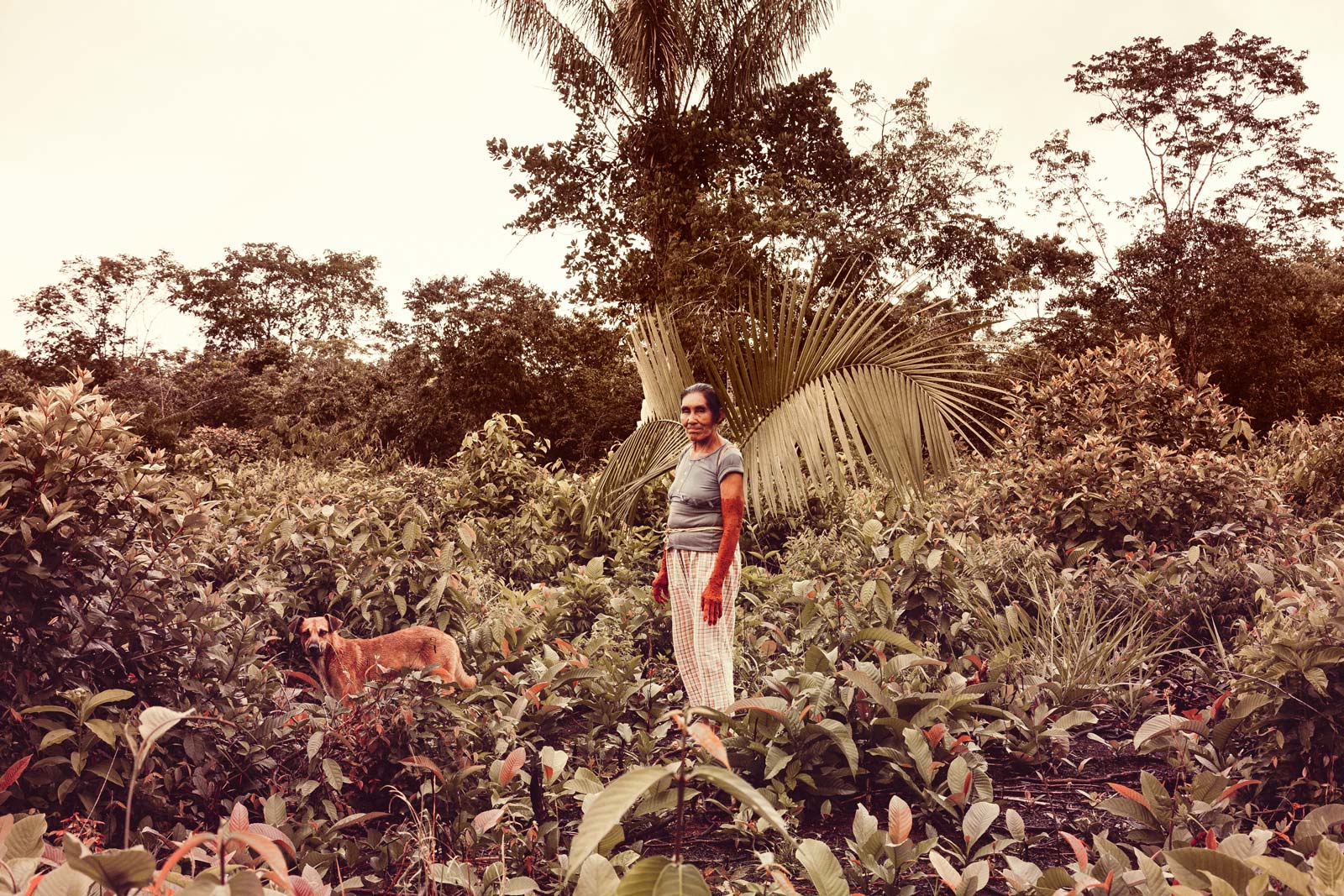 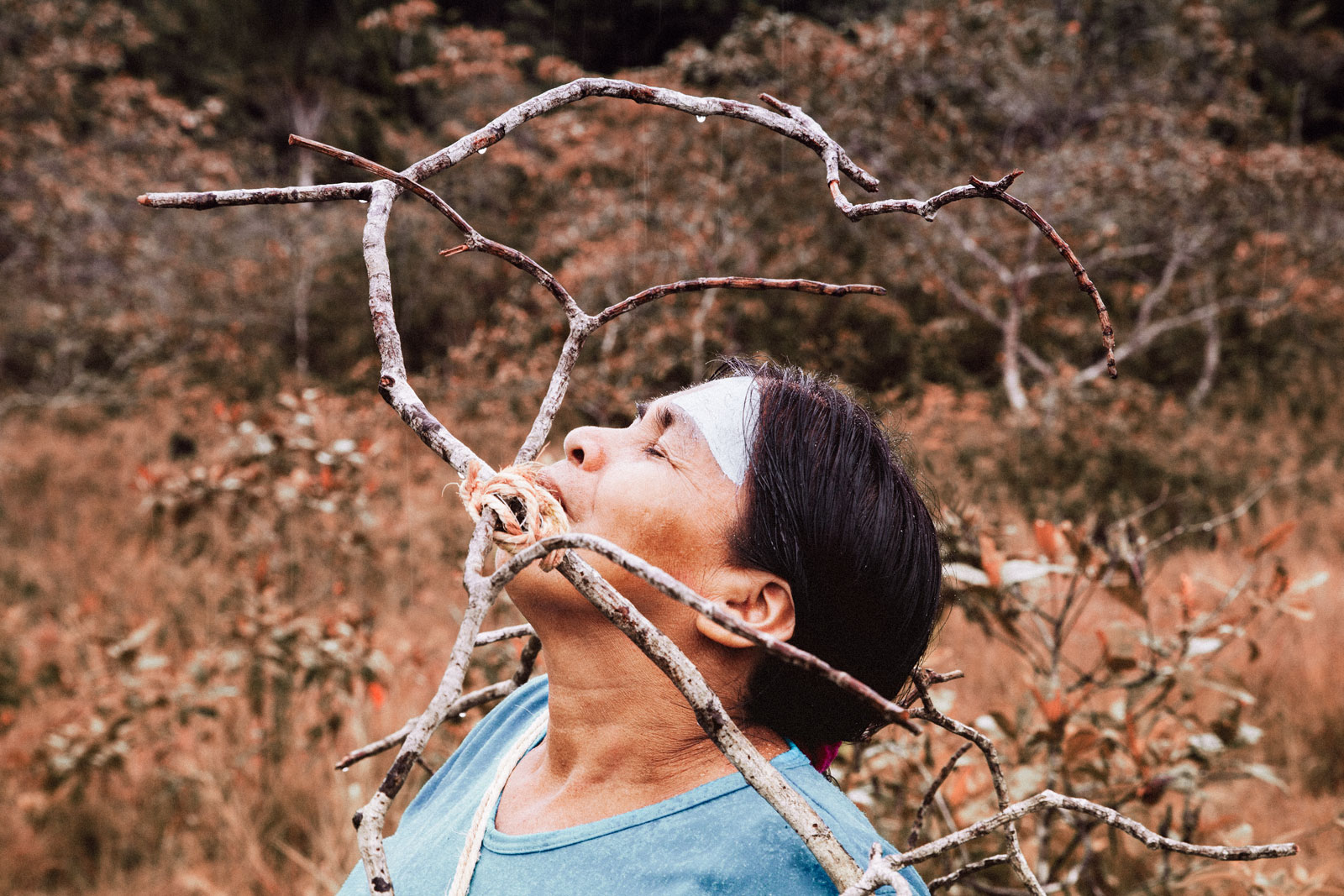 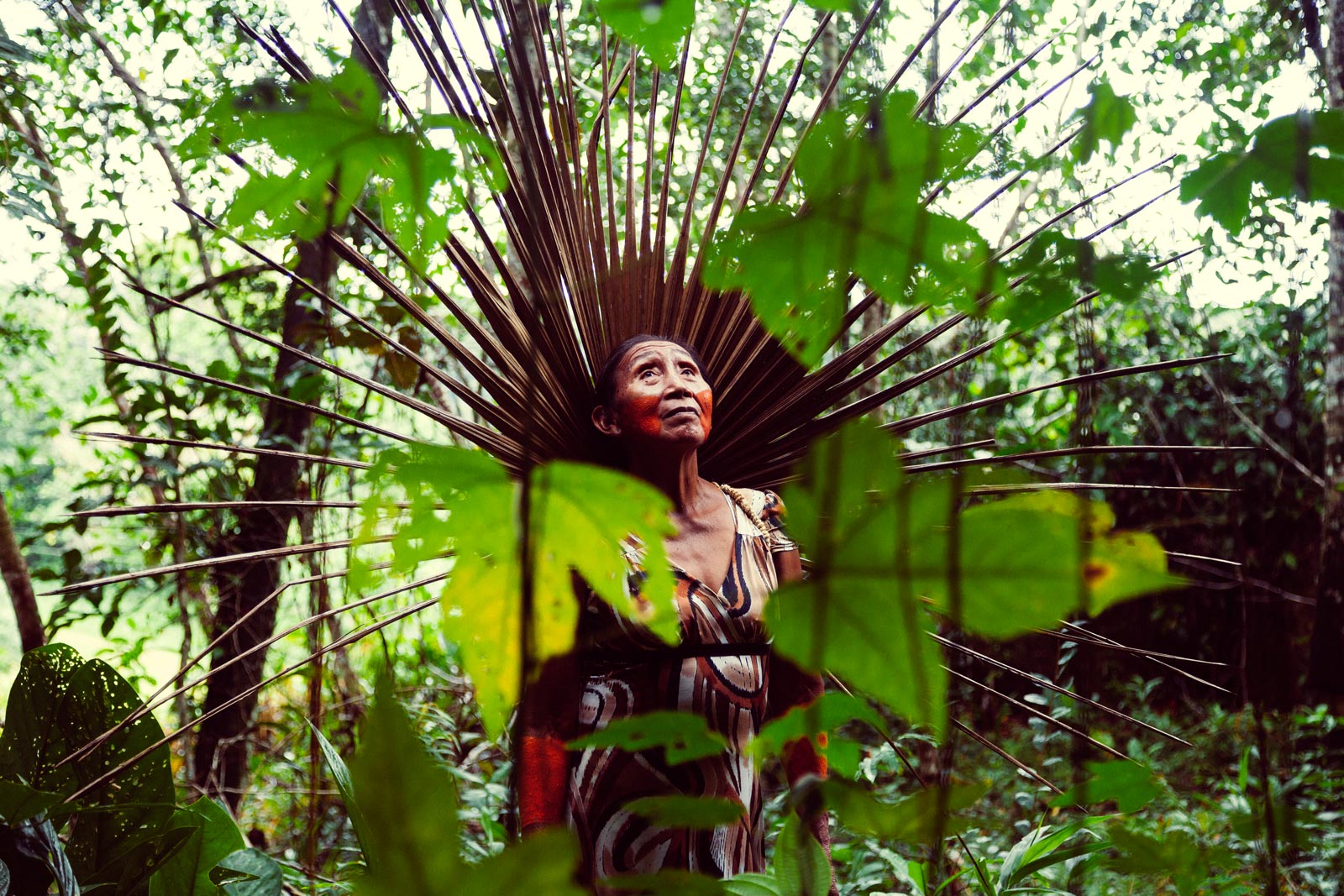 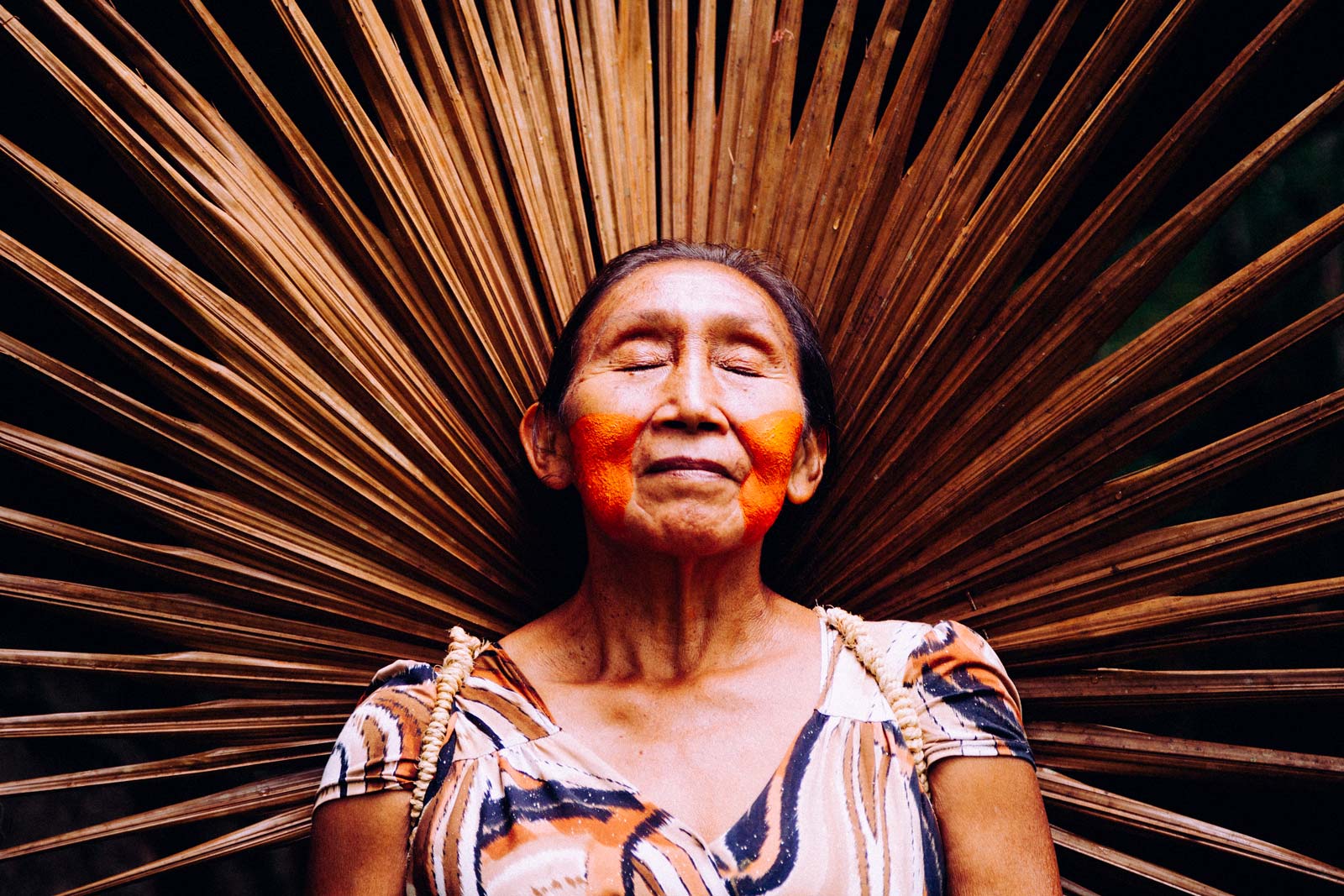 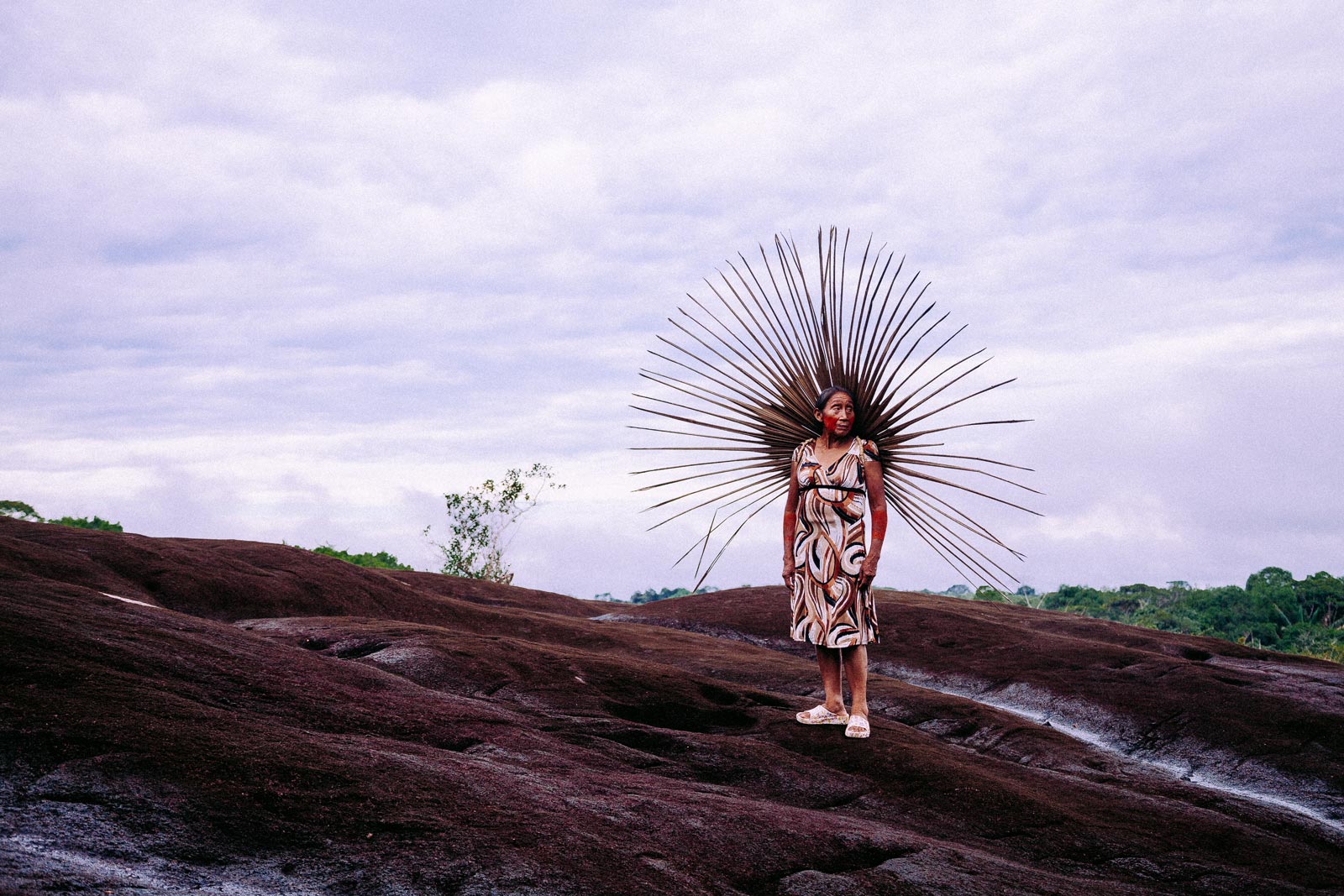 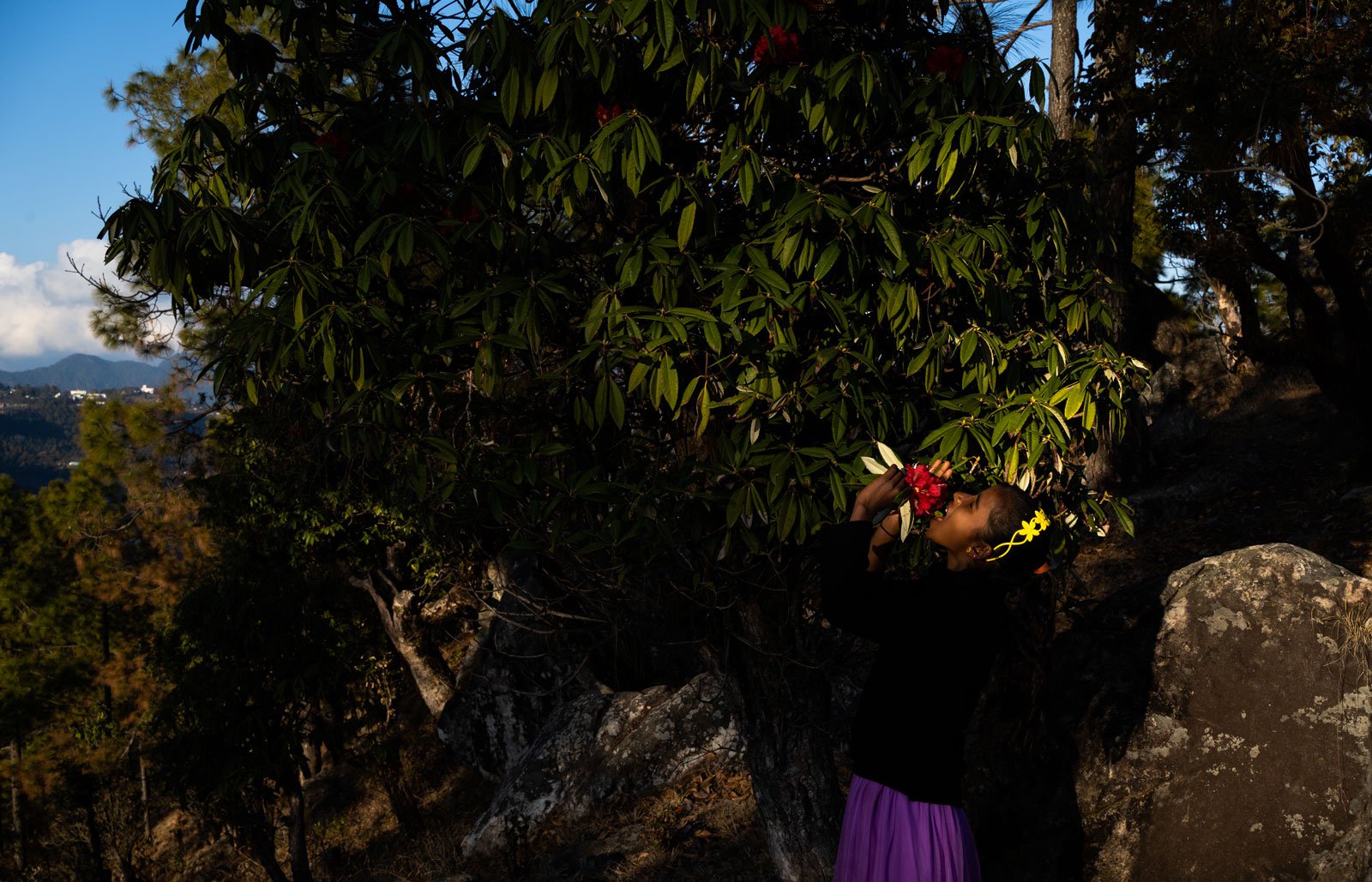 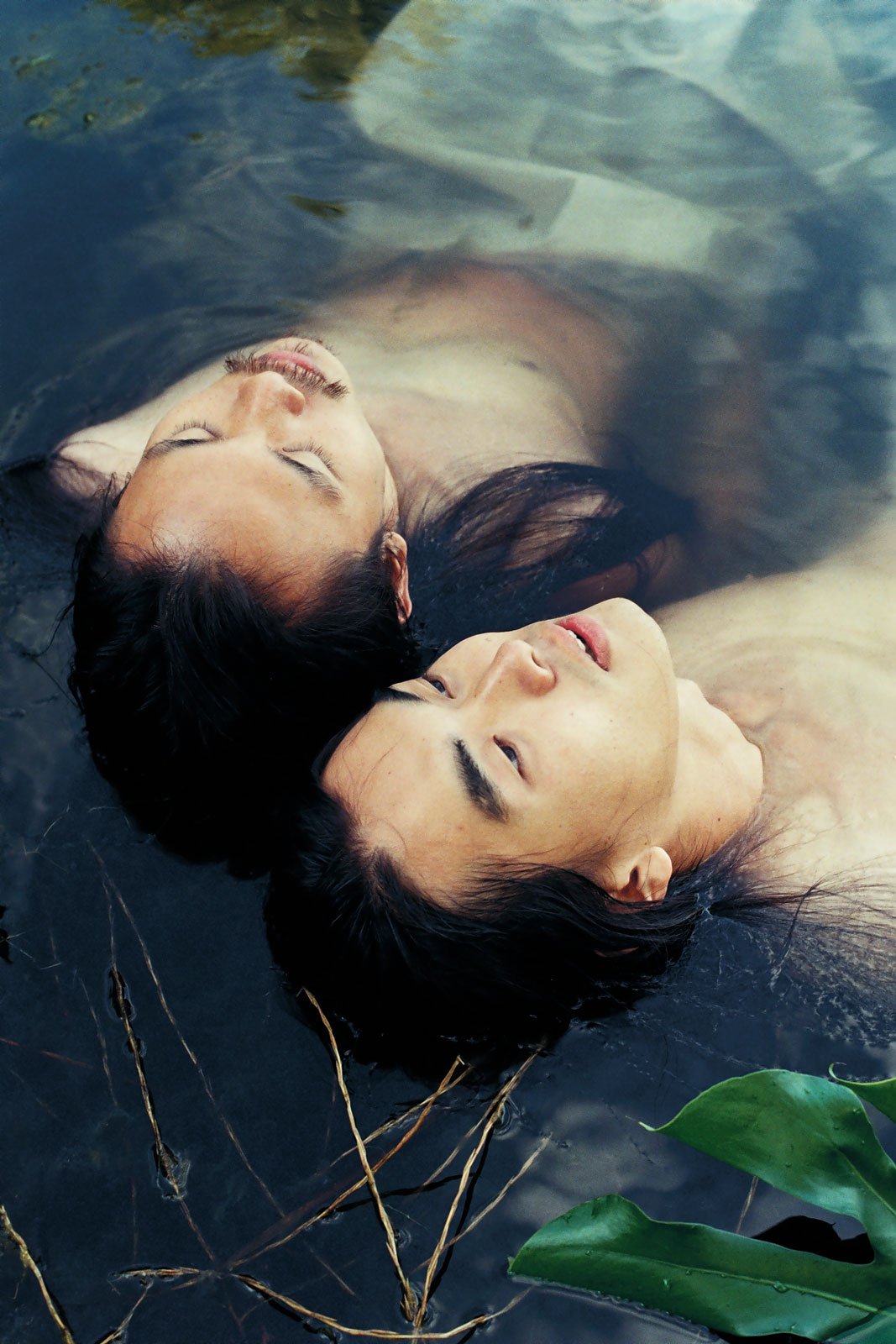