On a visit to the Xingu, Brazilian journalist Yula Rocha encounters Indigenous communities under threat, and meets Indigenous artists and activists using their ancient culture to fight back against agribusiness, logging and a rapacious right-wing government - while sounding the alarm on the destructive impacts of climate change.

Aerial photo of Piyulaga village - the largest Wauja village in the Xingu Indigenous Territory, on the Amazon basin, and the first Indigenous territory officially demarcated in Brazil. The villages are formed by a traditional communal oval-shaped area, around the central plaza, where the men’s-house is located. There are around 700 Wauja people living in eight villages in Upper Xingu.

Driving to the Xingu Indigenous Territory, in the Amazon basin, you are surrounded by miles and miles of soy, corn and cotton plantations. It’s very dry in July and August and there is little sign of wildlife. The billboards announce new drought-resistant pesticides for sale. You see heavy machinery going up and down the countless identical rows of huge farms and passing lorries carrying grain on the dirt roads that cut through this area in the heart of Brazil. The state of Mato Grosso, south of the Amazon forest, is a global agricultural power and the main soybean producer in the world. Brazil is also the second largest beef producer in the world, with the state of Mato Grosso being the largest producer of beef in Brazil. After six hours in the car, mesmerised by the endlessly repetitive landscape, you finally see some trees on the horizon. You are entering Indigenous territory.

On the road that we took, there was just one small sign by the roadside, nailed to a cracked wooden pole, saying “federal government - protected land”. If our driver hadn’t pointed it out, we could easily have missed it.

Suddenly we were in a green oasis enclosed by deforestation. The first ever demarcated Indigenous land and the most well-known Indigenous territory in Brazil to be recognised by the federal government 61 years ago. As the largest remaining island of Amazon tropical forest in the ‘arc of deforestation’, the Xingu Indigenous Territory is a climate war zone. We could feel the difference instantly: the temperature is two to three degrees celsius cooler.

Piratá Waurá, teacher, photographer and documentarist was our host. Waiting at the riverbank to take us to his village, Piyulaga, where his wife, children, parents, aunt and cousins were waiting to warmly greet us. Piratá and filmmaker Takumā Kuikuro from the Upper Xingu are our associates at People’s Palace Projects, an independent arts research centre for social justice based at Queen Mary University of London. The non-profit organisation has been working closely with Indigenous artists and activists for eight years producing cultural exchange between the UK and Brazil and developing audiovisual projects to support them in protecting cultural heritage and their territory. On this visit, we brought an English artist, Simon Butler from Migrate Art, to work on a project in collaboration with the Wauja and Kuikuro and contemporary western artists about the climate crisis and the consequences to the biomes and native people. 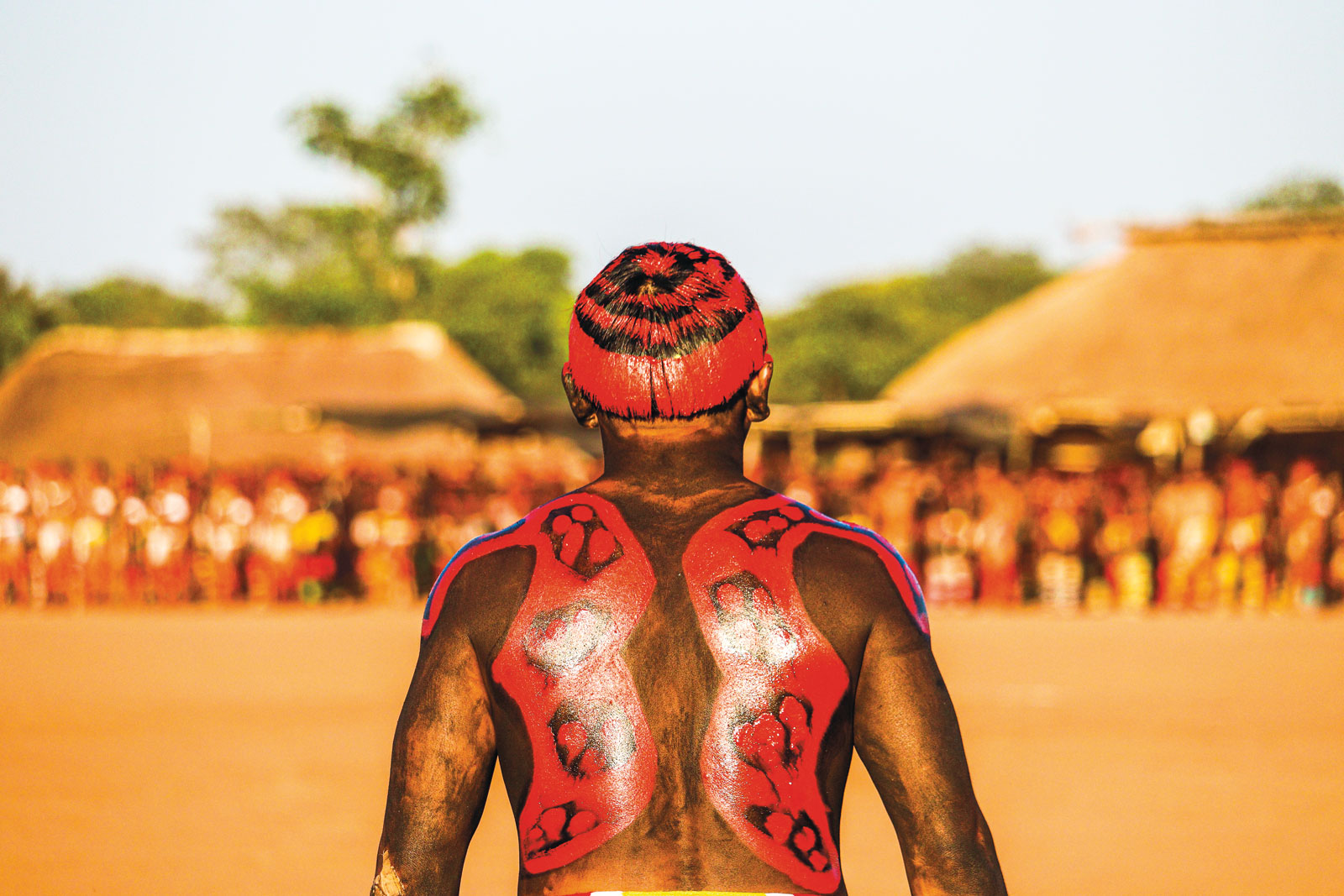 Aerial photo of Piyulaga village - the largest Wauja village in the Xingu Indigenous Territory, on the Amazon basin, and the first Indigenous territory officially demarcated in Brazil. The villages are formed by a traditional communal oval-shaped area, around the central plaza, where the men’s-house is located. There are around 700 Wauja people living in eight villages in Upper Xingu. 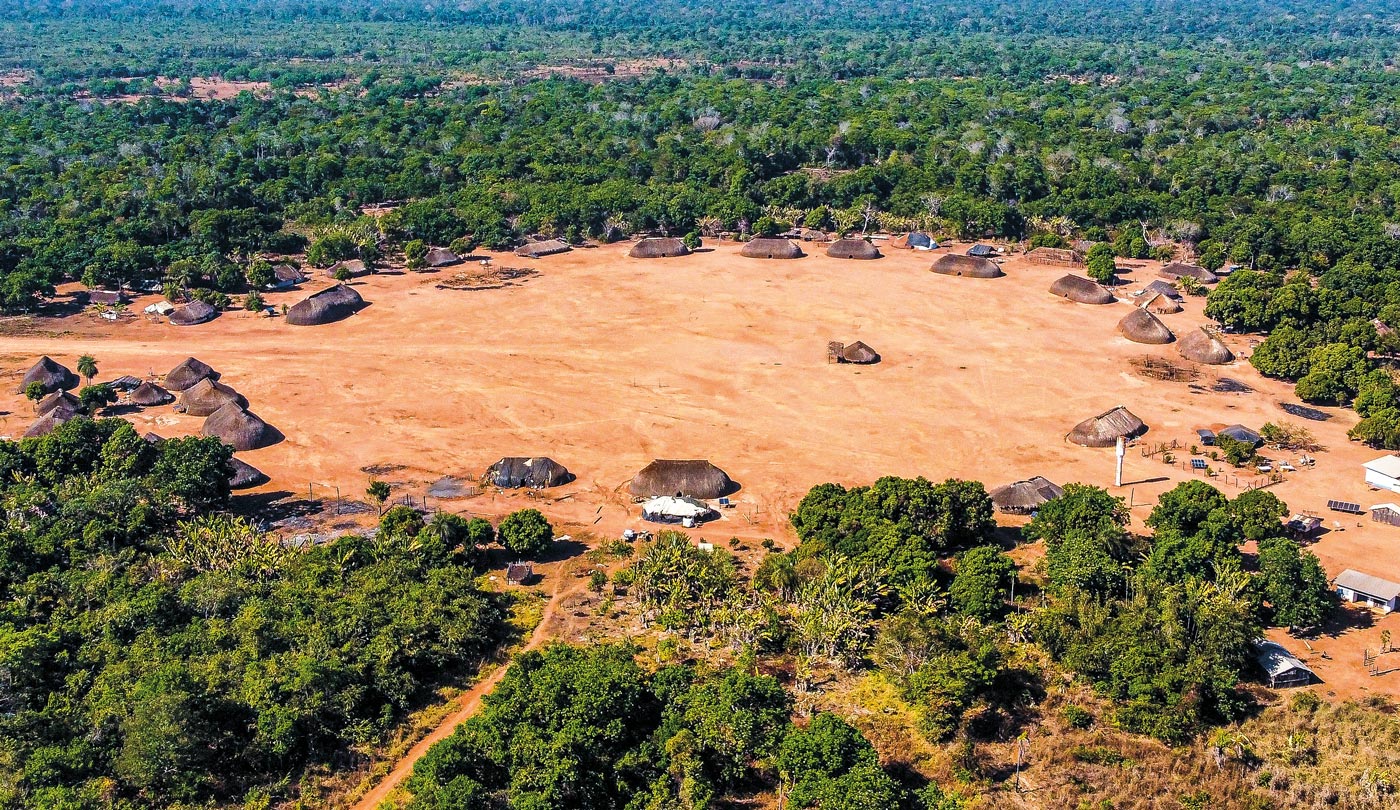 The Matipu Huka-huka champion is wrestling with the Yawalapiti winner. At the end of the Kuarup (a traditional funeral ritual) the hosts choose the best fighters to challenge the guests. 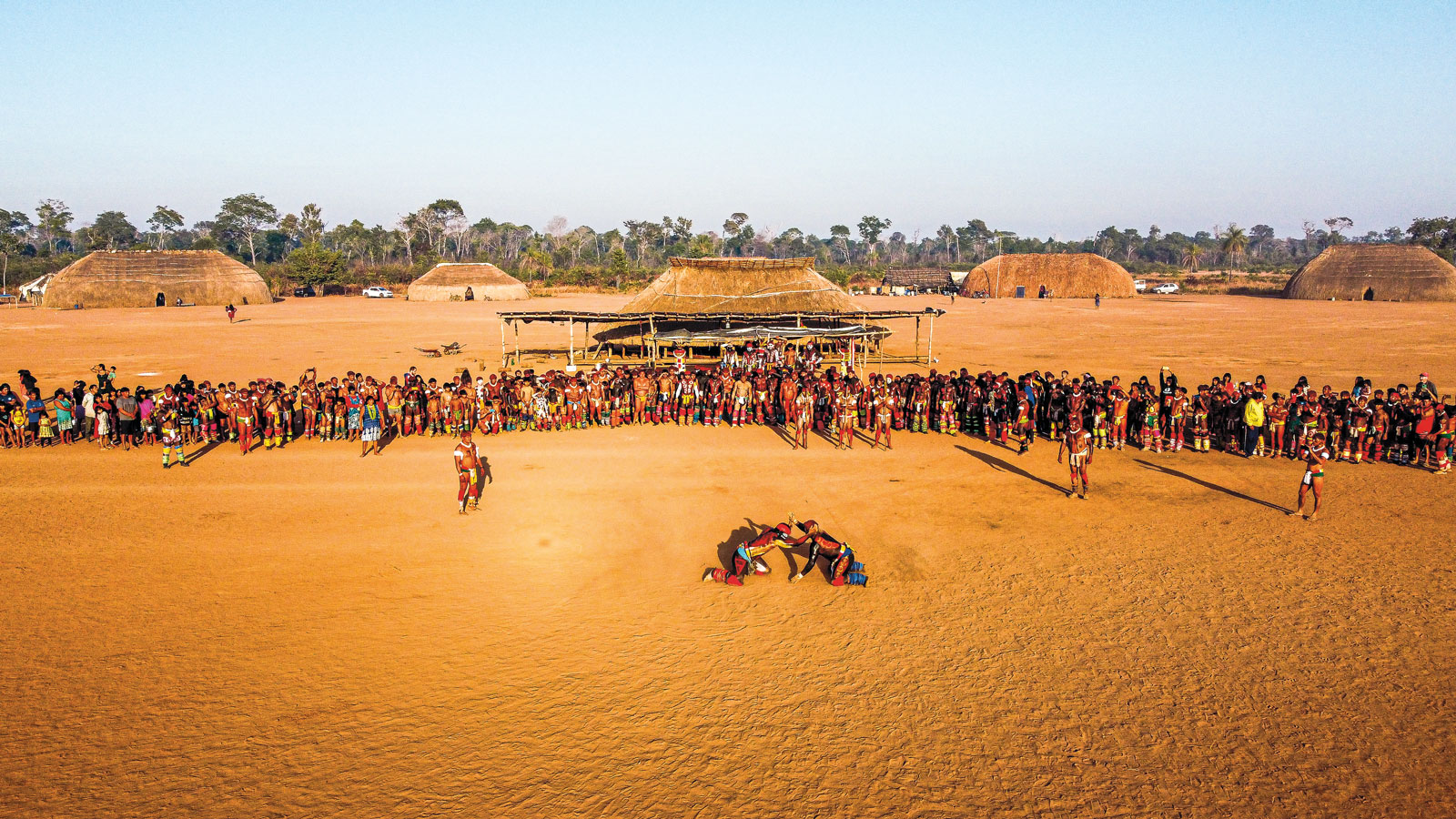 Kamo Waurá is painting a ceramic pot with urucum, a red seed found in the forest, while telling his granddaughter, Yakuwipu Waurá, the history around this traditional art-craft. Ceramics and body paintings connect the people of Xingu to the spirit world which are considered an important part of their identity. 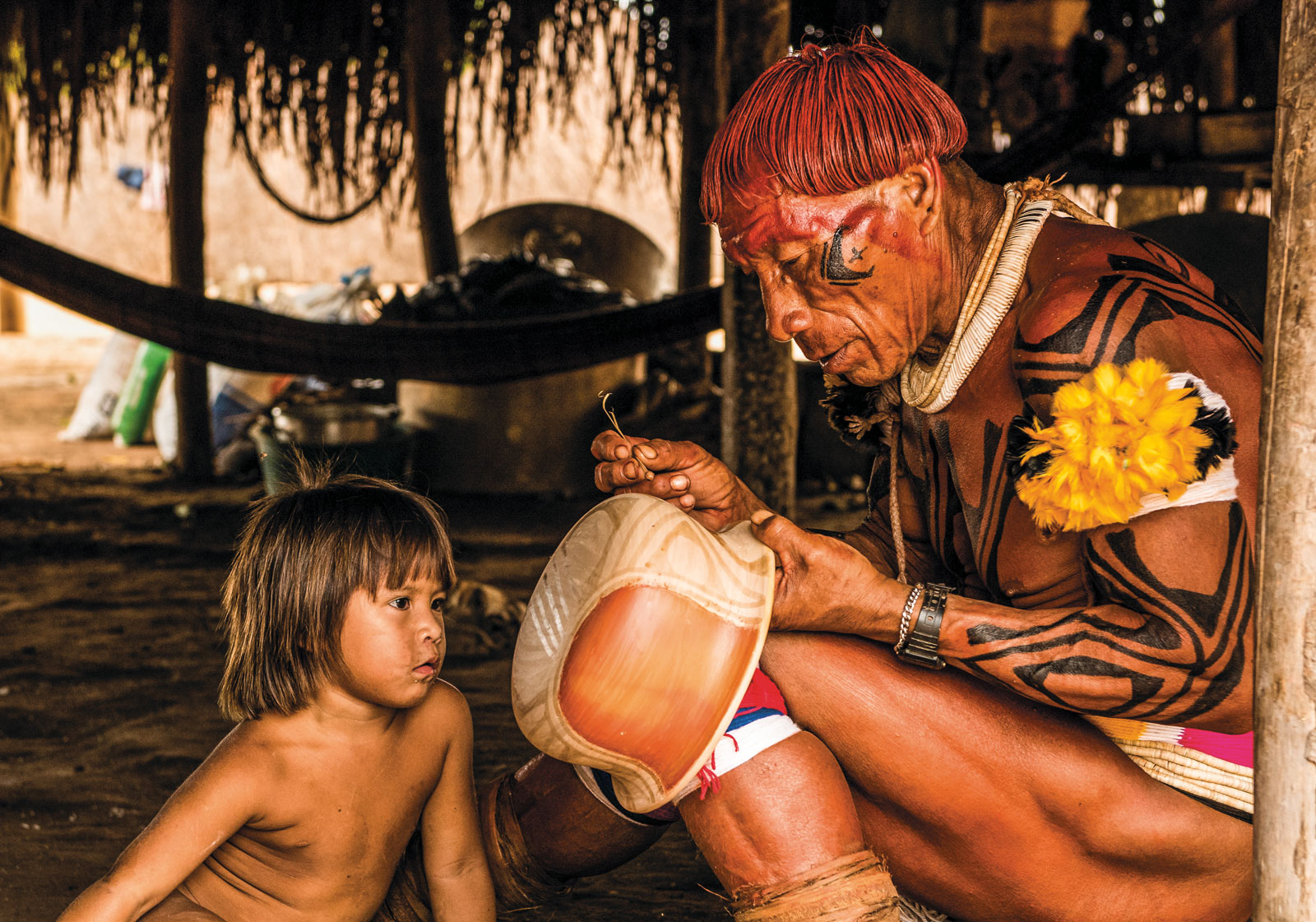 O Akari Waurá teaches his son, Ahula Waurá, how to play a flute, a sharing of traditional knowledge that goes through the generations. This flute is usually only played once a year, during a ritual when the pequi fruit starts to ripen around November. For the Wauja the song of the flute is a way of communicating with the spirits of the pequi tree to bring more fruit in the following year. 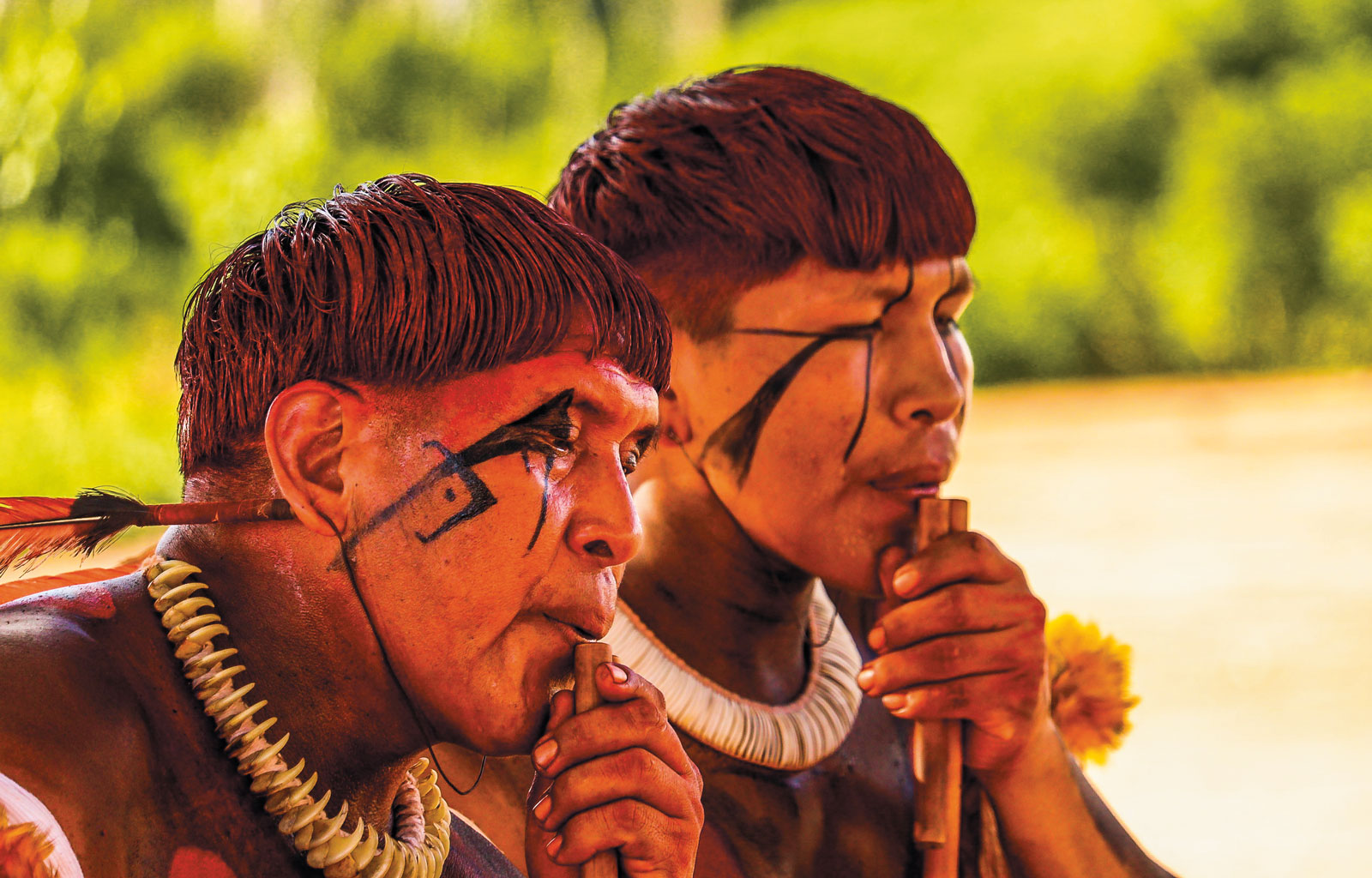 The girl is preparing the manioc that will then be grated and cooked as biju, a thick pancake eaten with barbecued fish. In the Wauja villages manioc is more valuable than money. 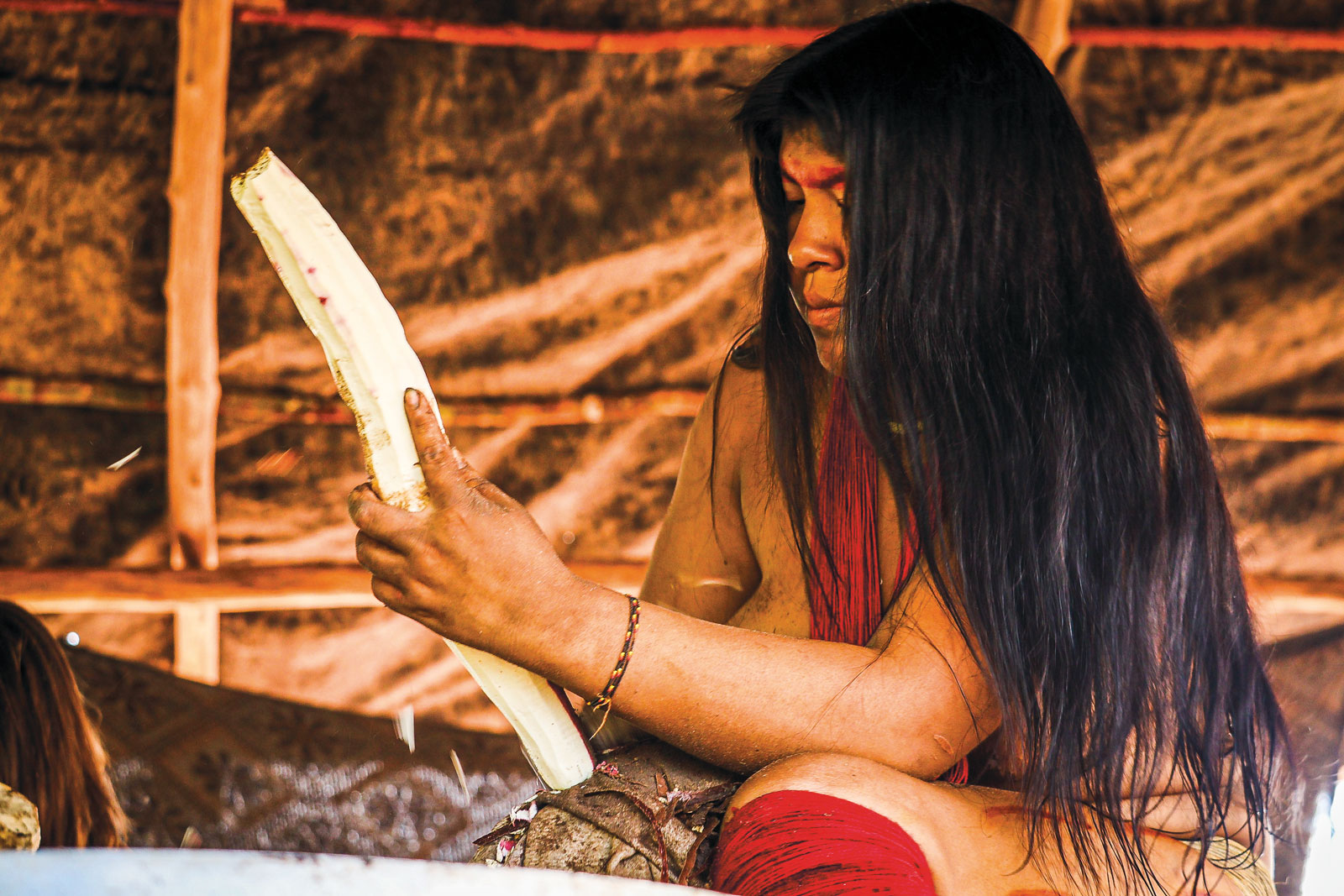 The young Huka-huka hustlers can only play uruá, a long flute, during the Kuarup ritual. They visit all the houses around the village to make the souls of the dead happy. 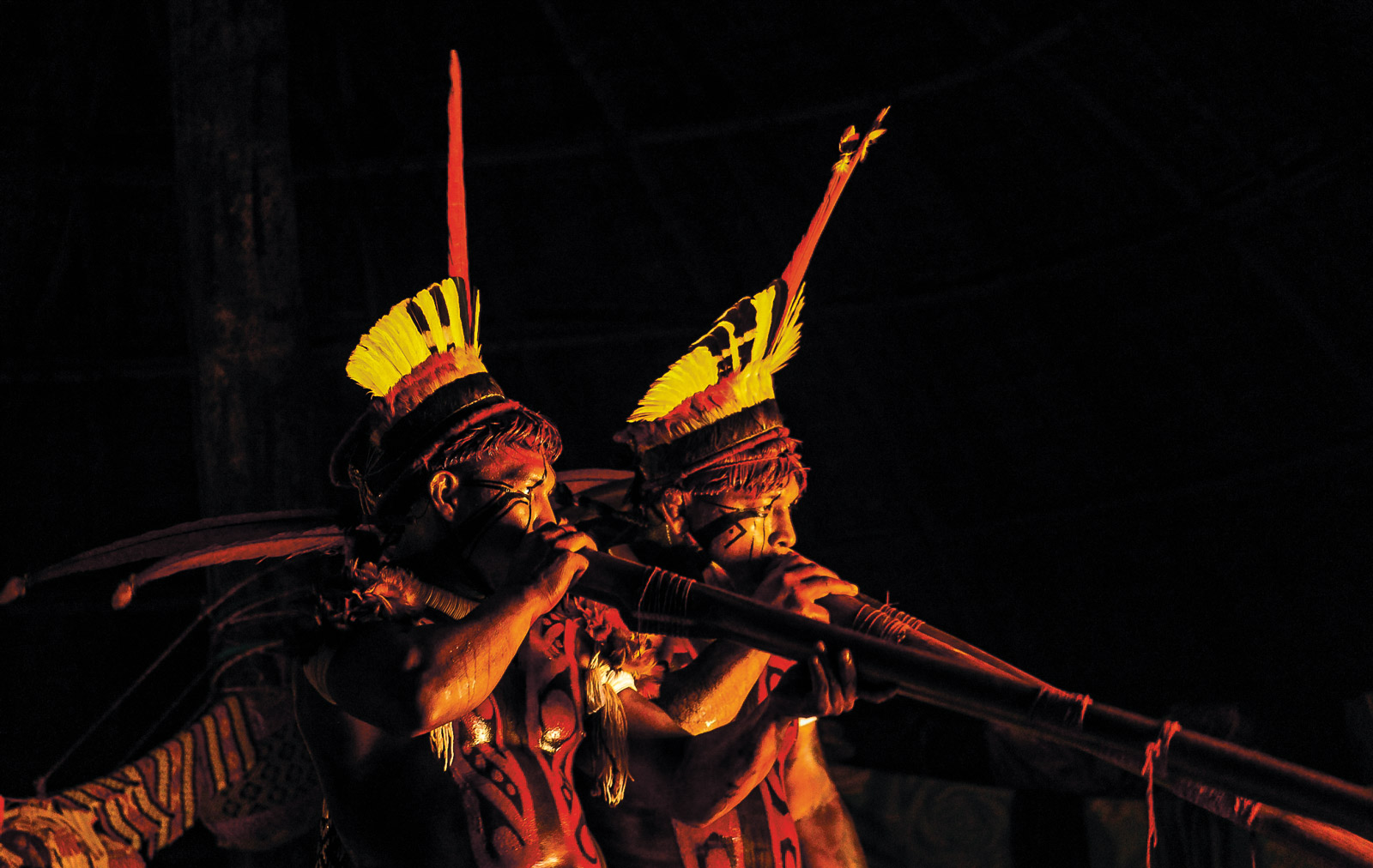 The hosts of Kuarup send three messengers to other villages inviting them to the ritual. They spend the night in the nearest forest in hammocks, the traditional way of sleeping. 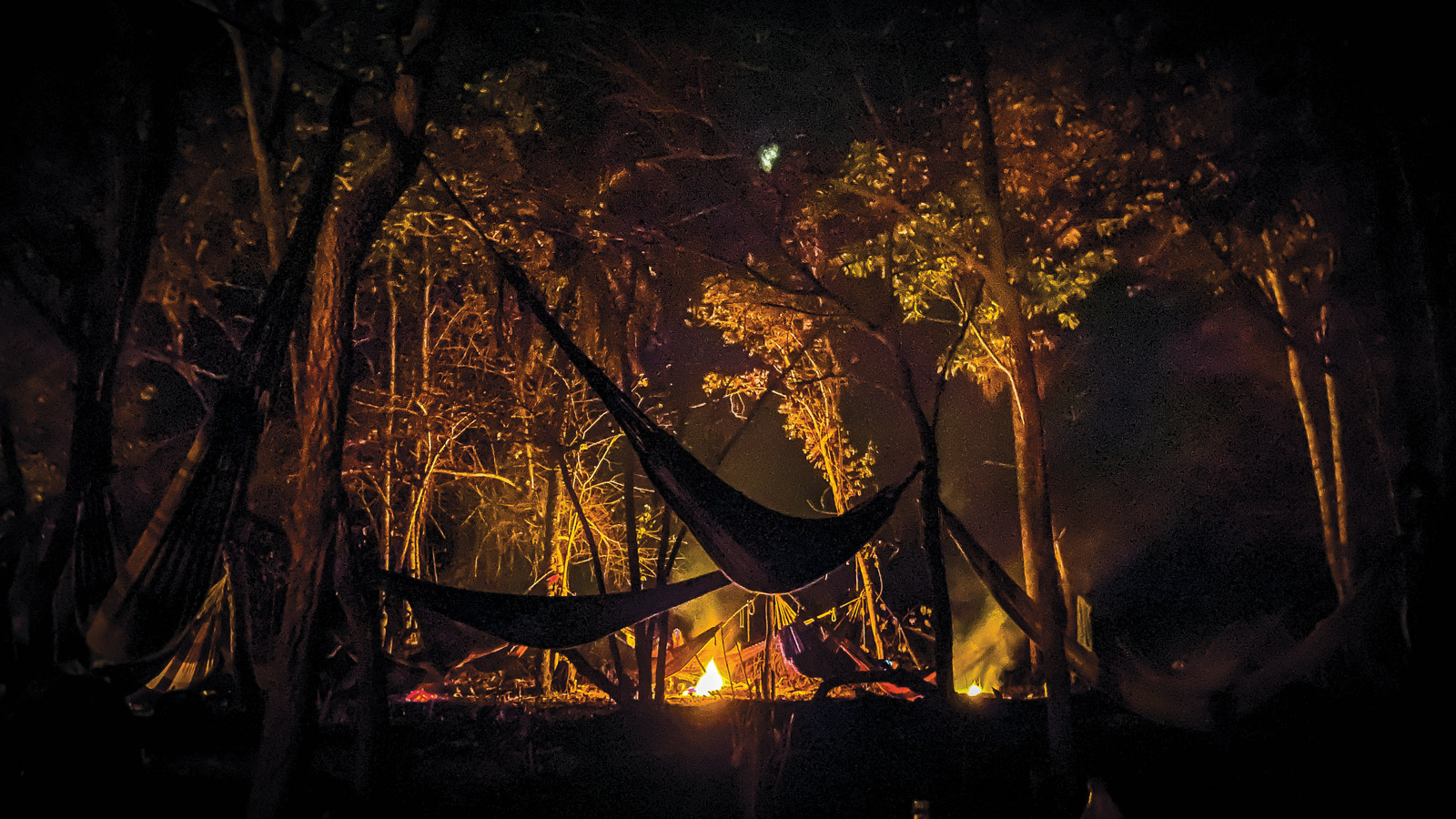 Wauja community leaders, digital artisans from Factum Foundation, independent archaeologists and anthropologists worked together to reproduce the original Kamukuwaká cave. The team employed high-resolution photogrammetry to record the cave, then using 3D printing technologies based on documentation and Wauja collective memory, a digital restoration of the rock and the original carvings was carried out in the studio in Madrid. This resulted in a 1:1 facsimile of the entrance to the cave, with all the petroglyphs, measuring 8x4x4 meters. 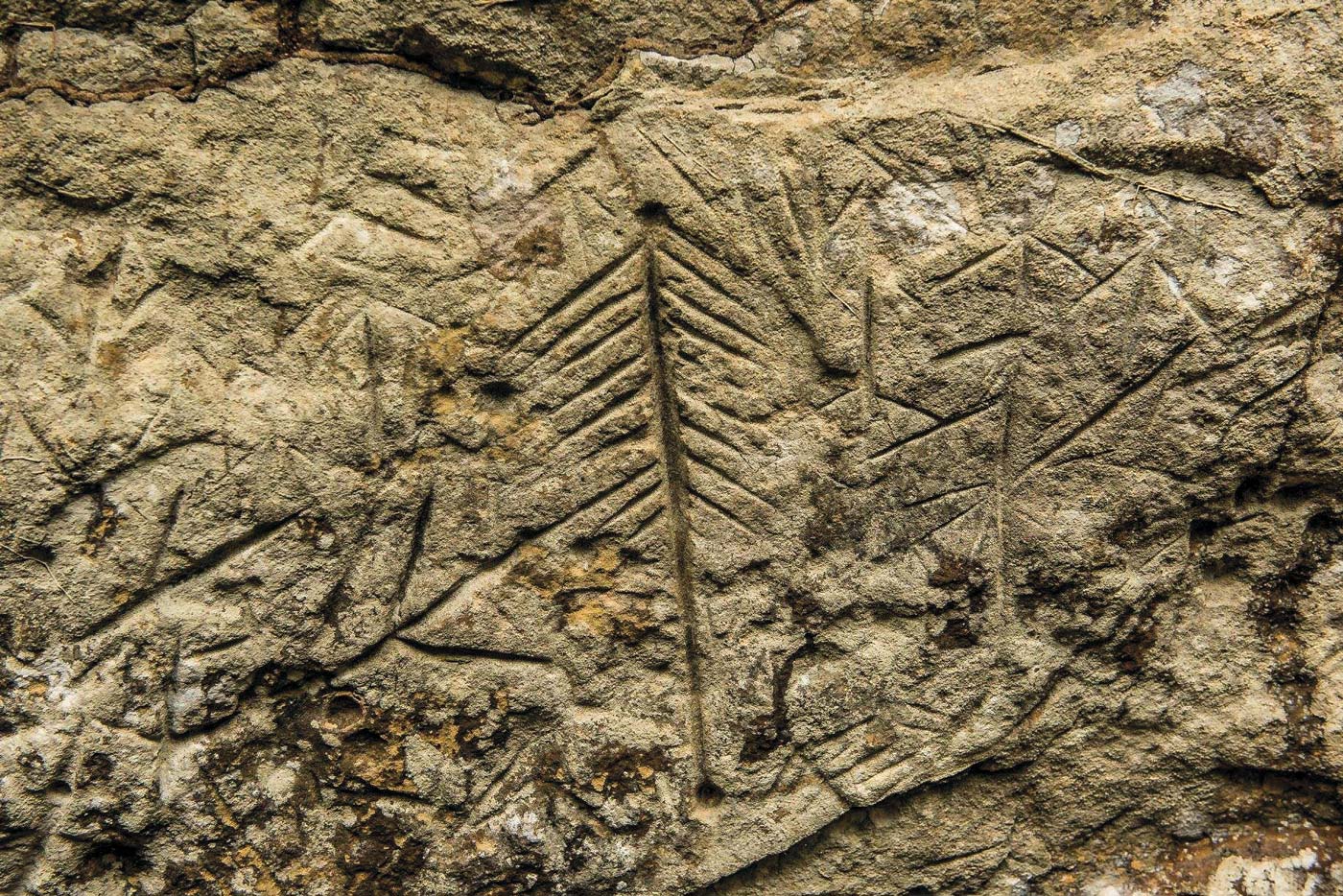 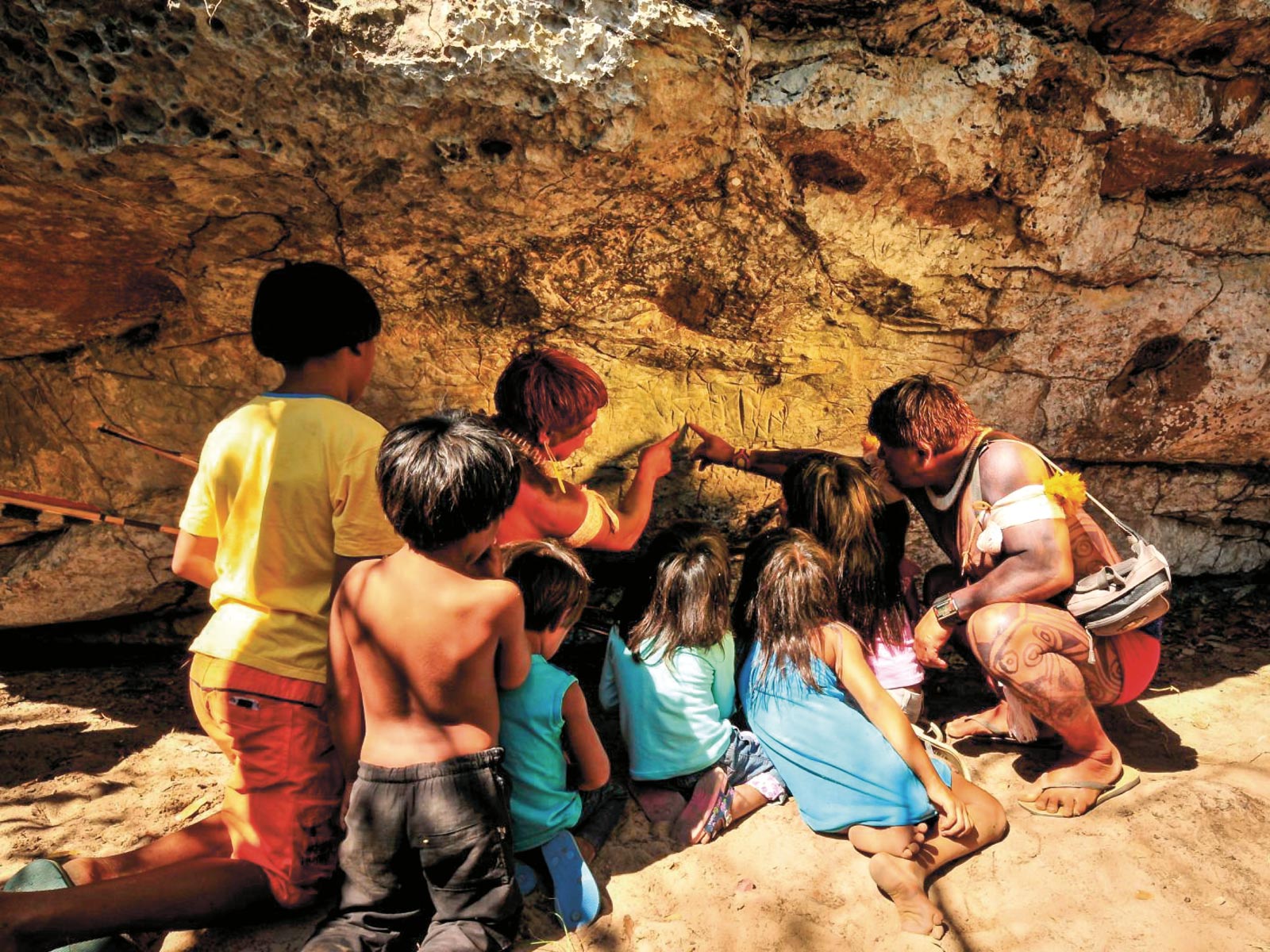 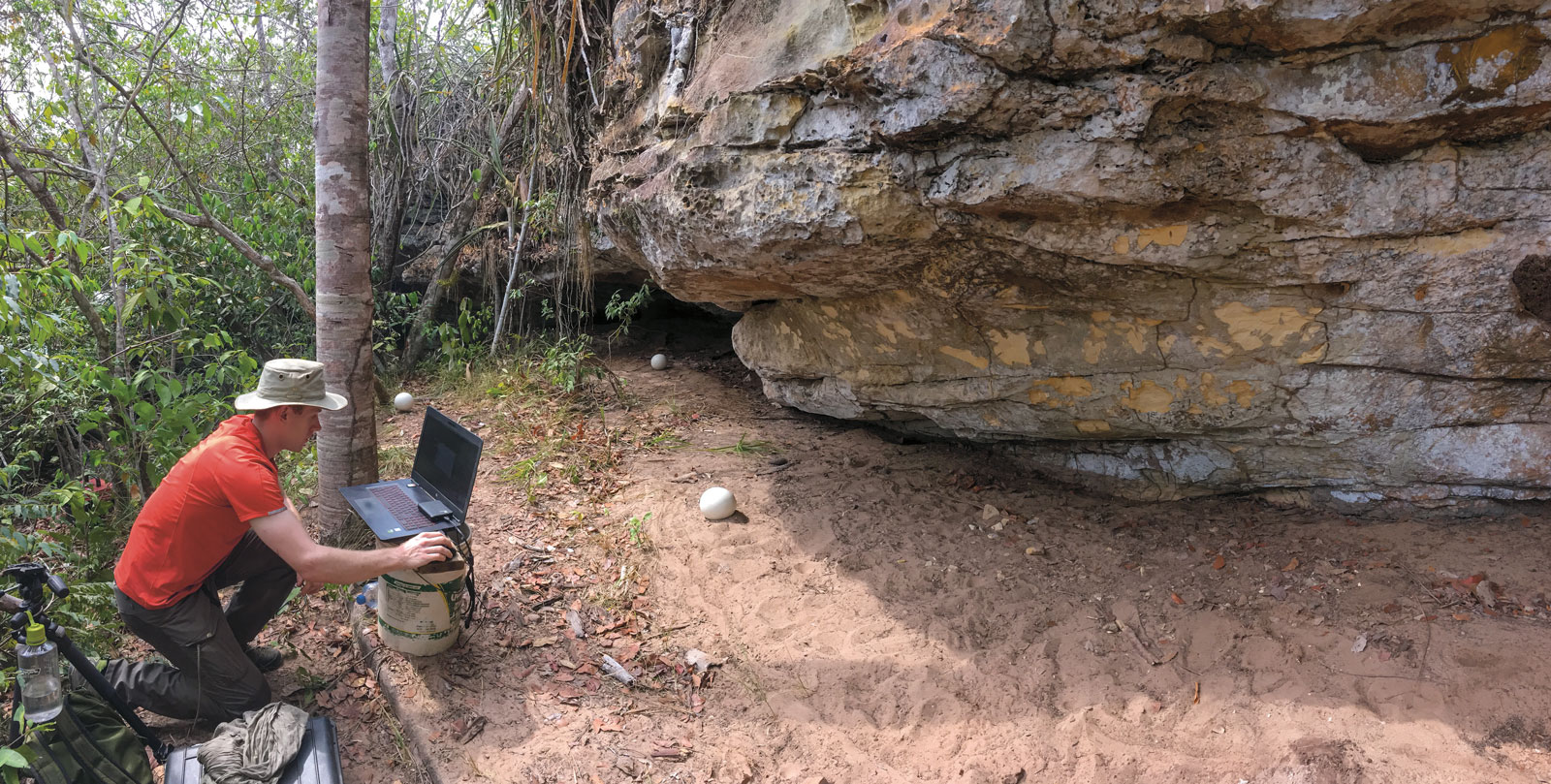 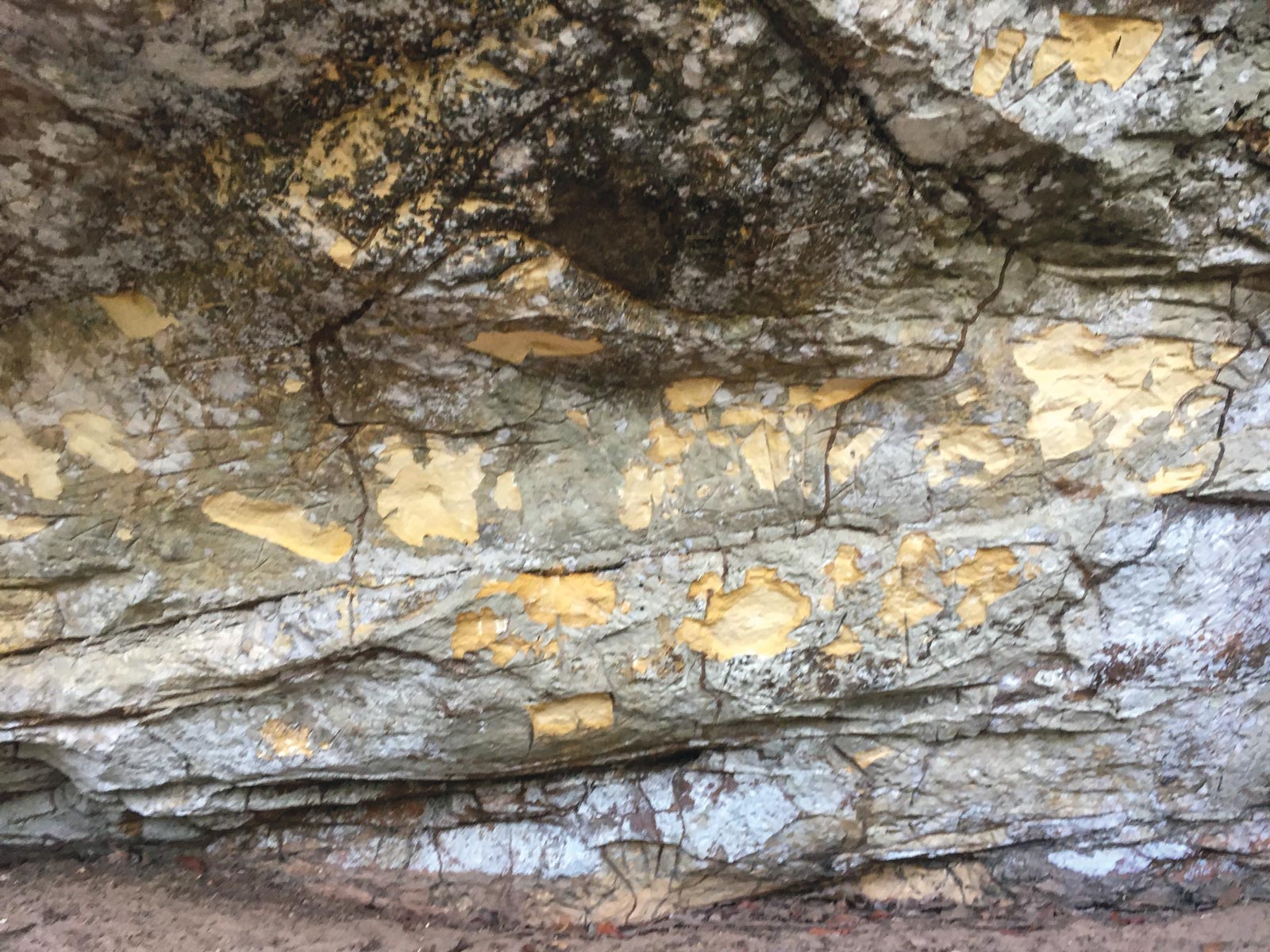 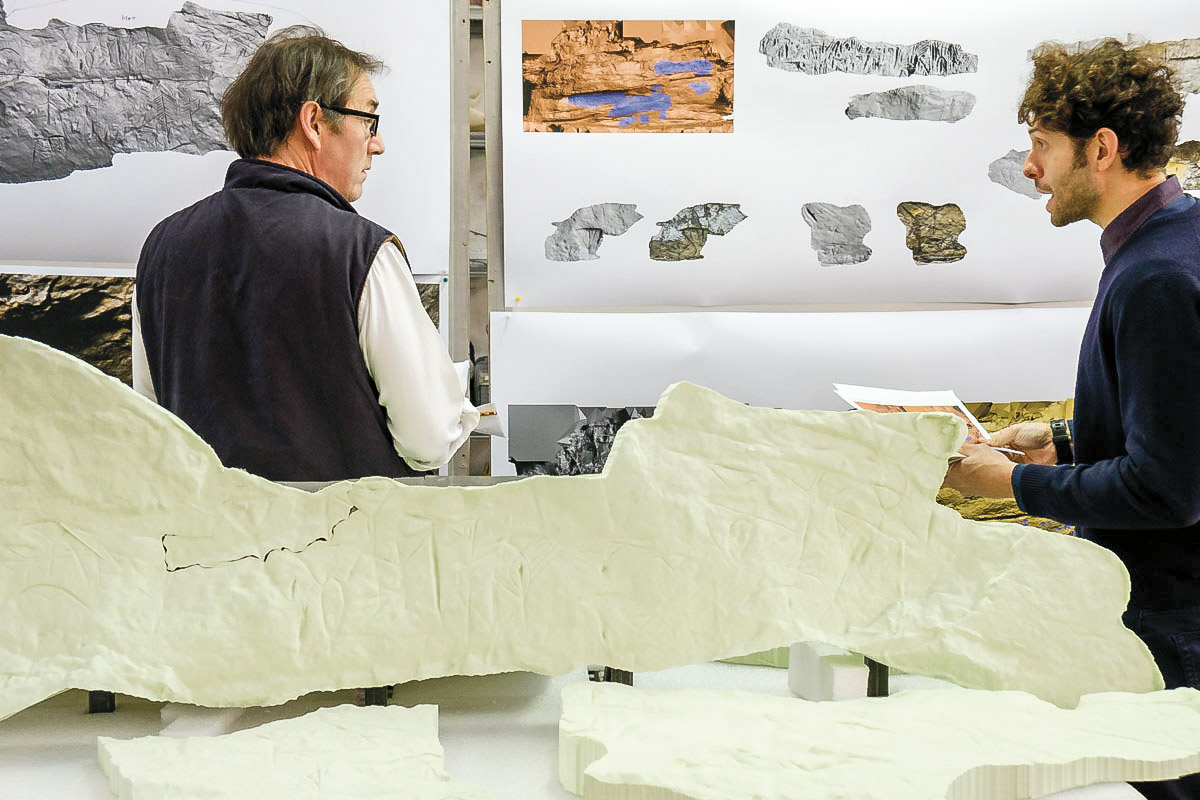 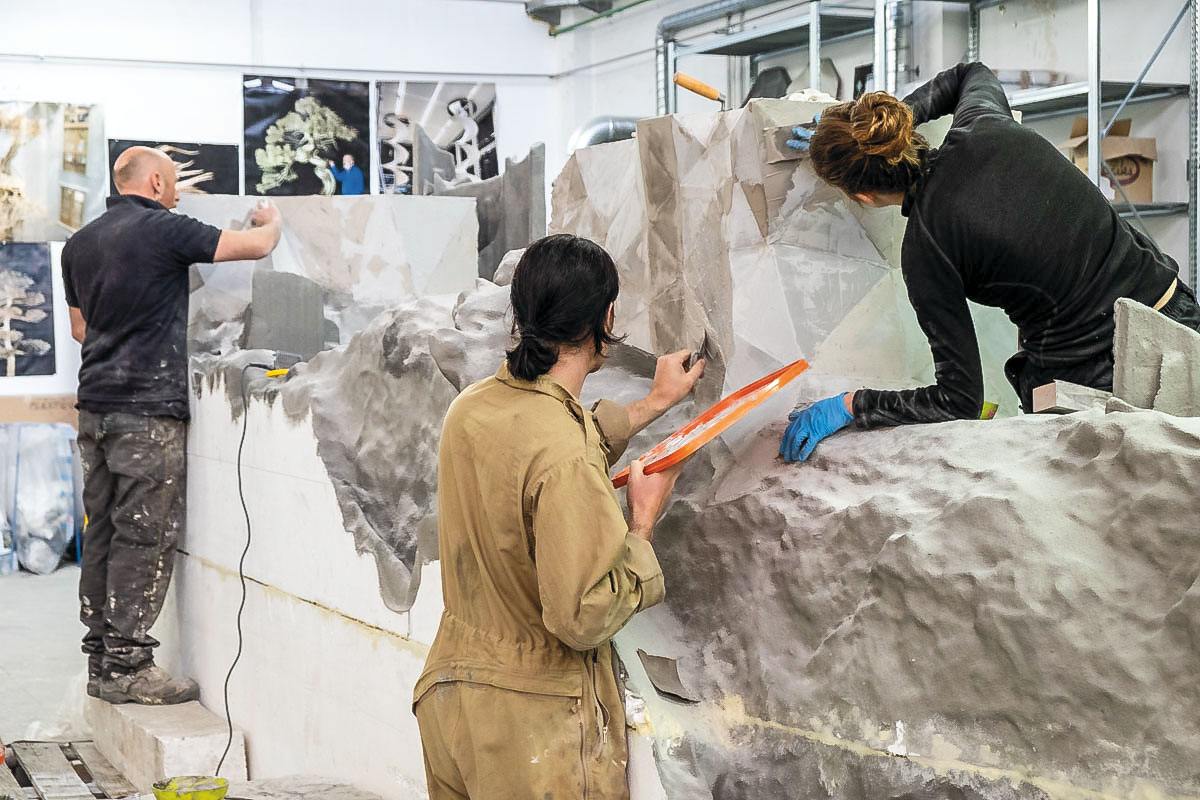 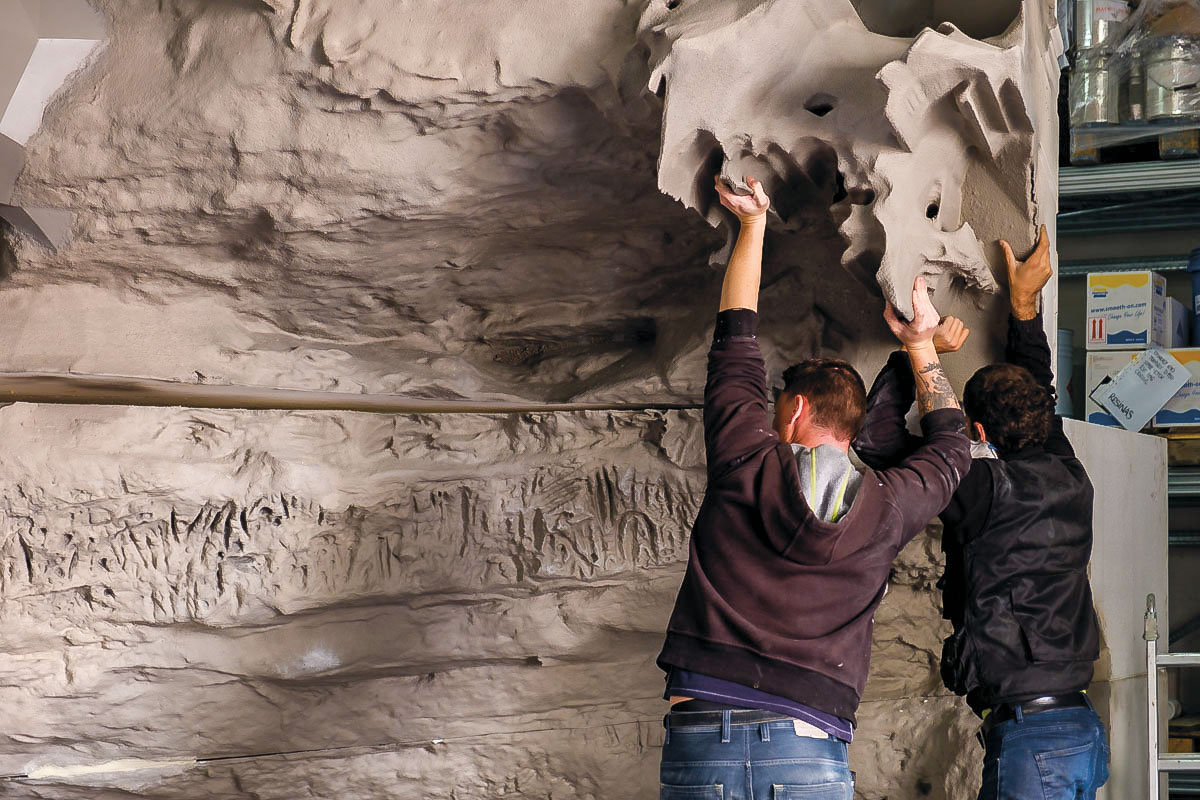 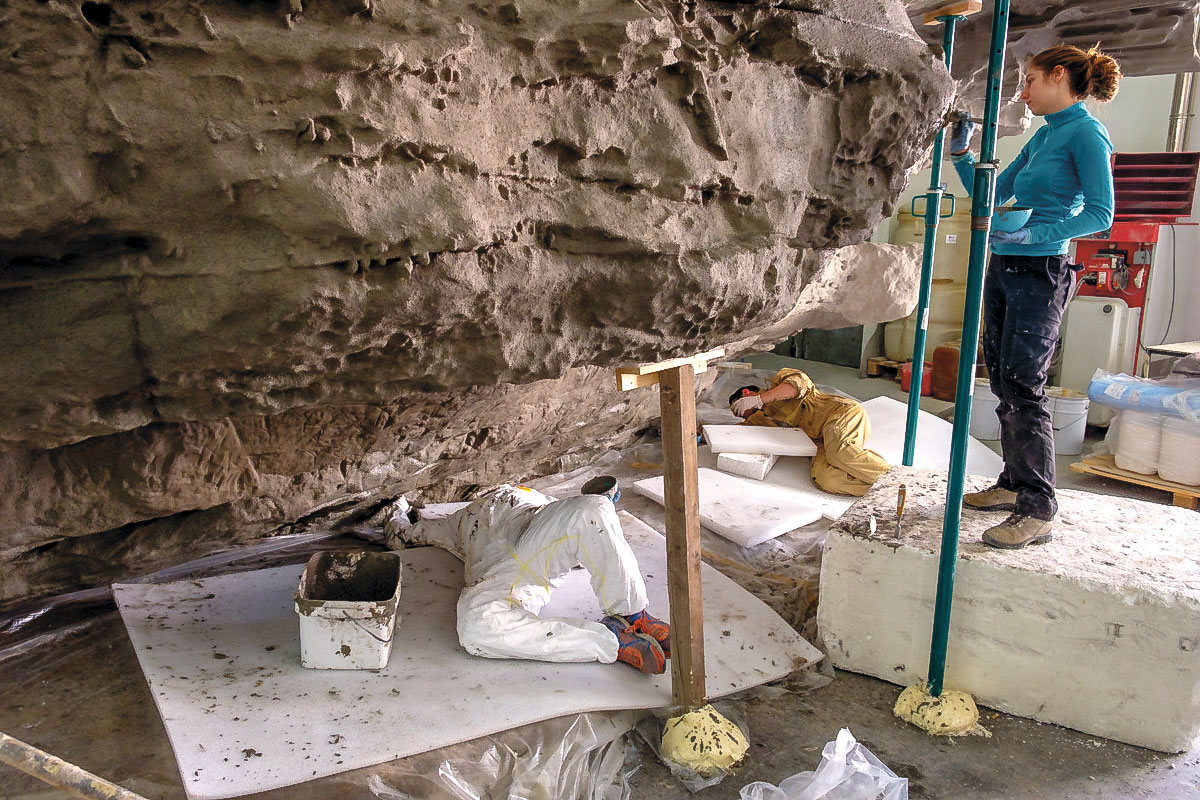 While the parents are out fishing, children play freely in the river Tamitatoala that runs through the Xingu Indigenous territory. 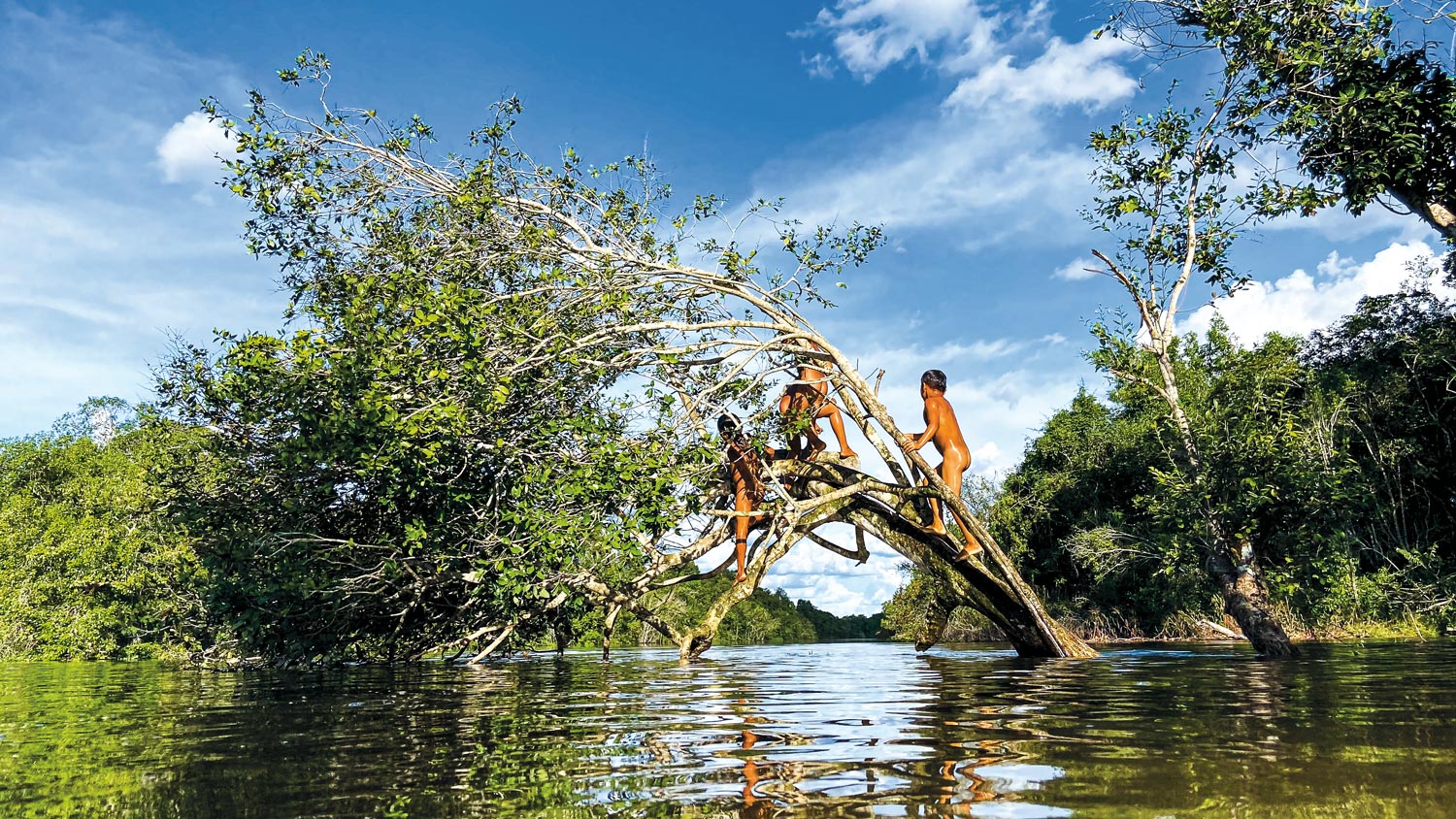 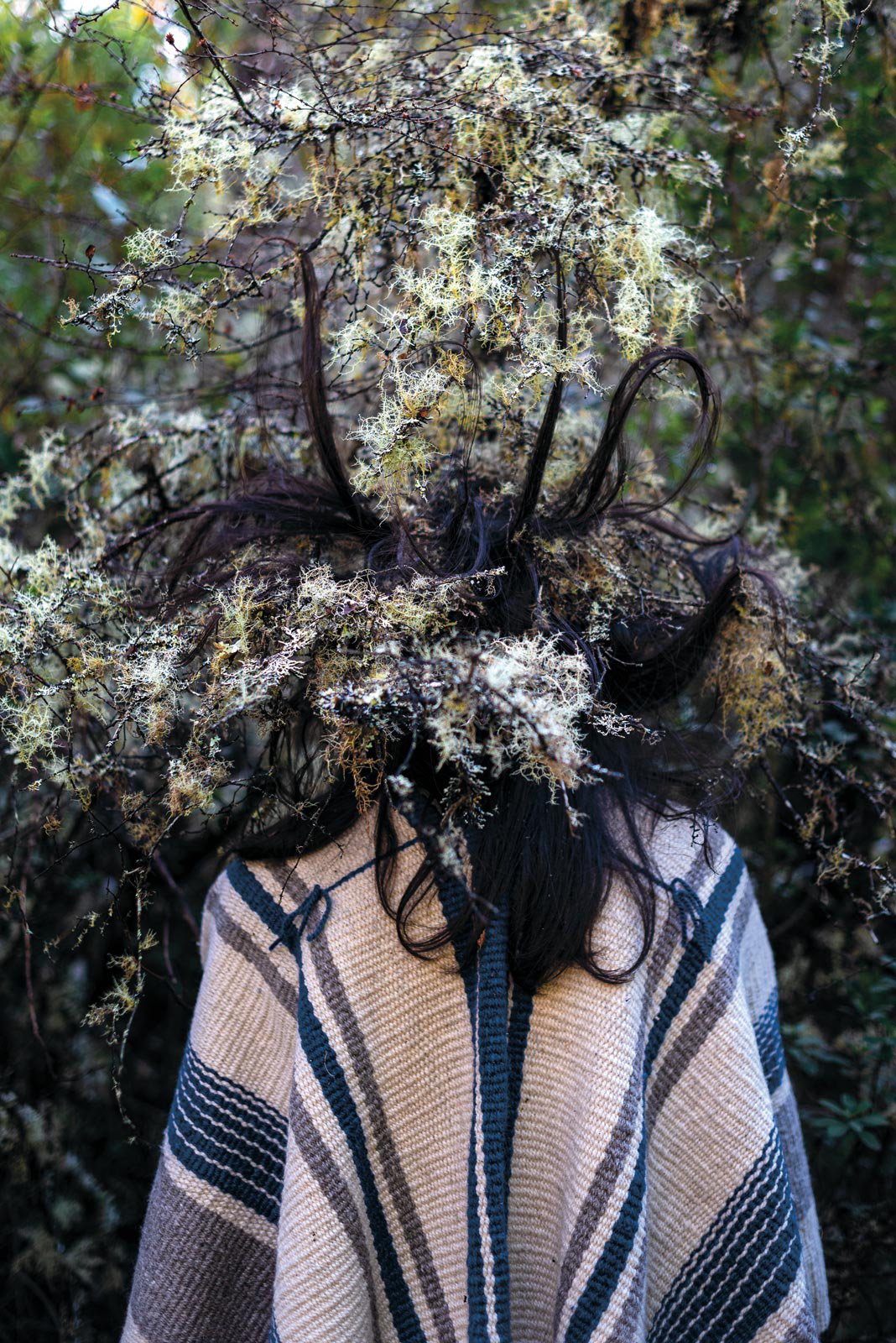 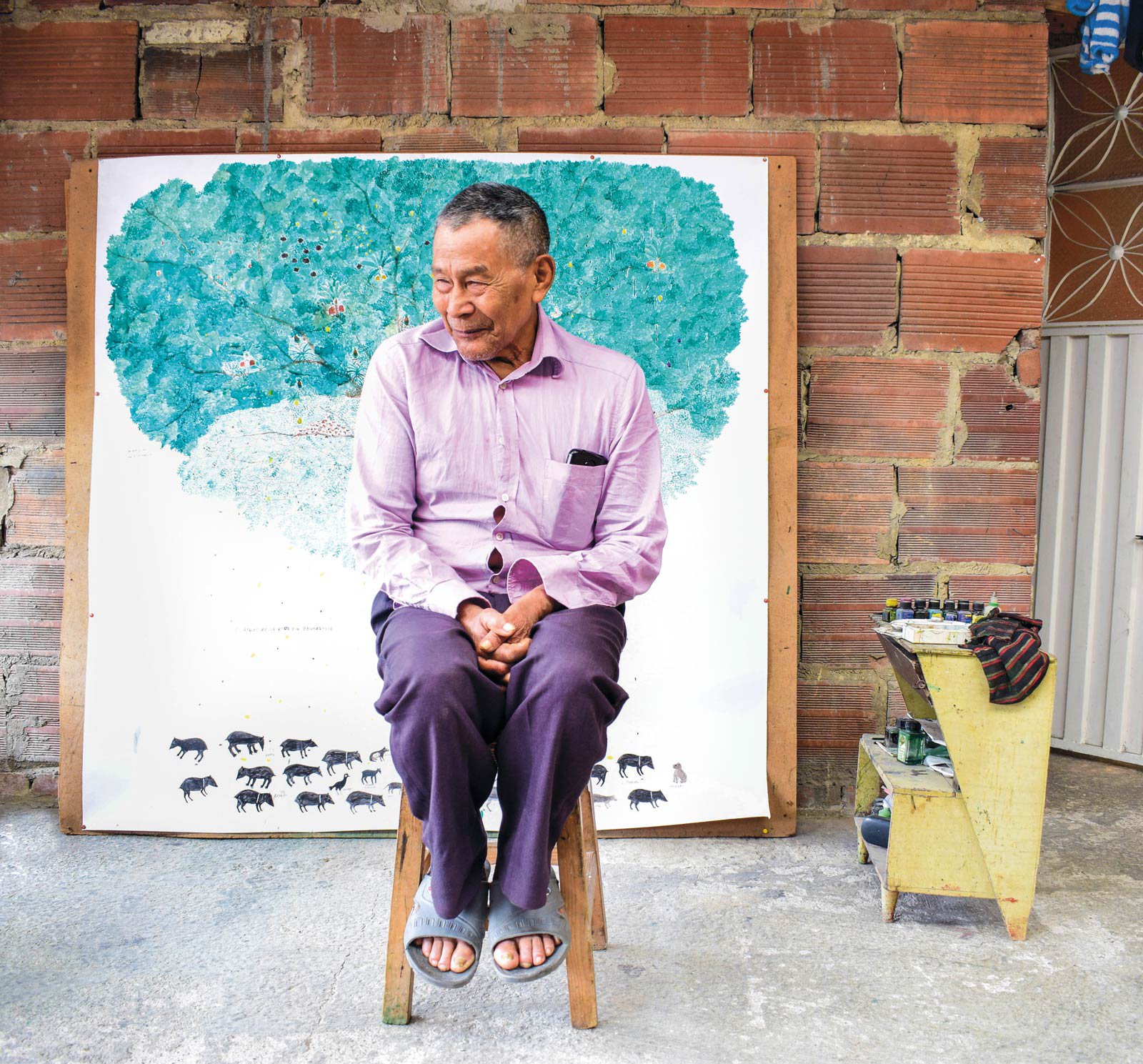