Urban areas may be dominated by concrete, metal and smoke, but nature still finds a place to flourish. Ecosystems are thriving 30 feet above our heads, just out of sight.

Take any business day in any European city north of the Bay of Biscay and watch the people hurrying to work. Their senses are dominated by the artificial world, the fluorescent lights of convenience stores, the smoke and rumble of traffic. When commuters glance up it is only to complain of the clouds darkening the skies. If their eyes could see around corners, onto the rooftops of the grey monoliths around them, they would notice another world, 30 feet up. It’s cold up there in the roofworld. The wind brushes concrete and tile with chill fingertips, but this is no barren landscape. Life is pushing its way through the cracks with its usual vigour.

These urban plateaus are laced with moss and splattered with lichen. Dandelions bloom in the ridges and small trees twist their roots around derelict chimneys. The citizens of these rooftop republics roam free, commuting from their rooftop dormitory to the street below where they feast on the leftovers. Most, like the starlings, are mere lodgers, abandoning their roosts at a moment’s notice, their forgotten effects a pile of feathers and droppings. But the roofworld has its permanent inhabitants too: spiders that spend their entire lives on webs strung between aerials, and cockroaches, sheltering inside a cracked slate. Just as the inhabitants of the street below have their seasons and holidays, so too do those of the roofworld.

In the summer, when the rains come, the city people scramble for shelter, as if the water would burn their skin. But 30 feet up, Urban areas may be dominated by concrete, metal and smoke, but nature still finds a place to flourish. Ecosystems are thriving 30 feet above our heads, just out of sight. the first drop of rain triggers a burst of activity. Crows and jackdaws take flight, off to scavenge for surfacing worms, while the spiders scatter for shelter. Water pools in the frost-gouged cracks in the surface of the roof. Ponds are formed, nurseries for the mosquito brood whose larval home lies in the shadow of a weathered gargoyle, the grotesque transformed for a time into protector, a bountiful totem. When the drains clog and overflow, the workers look up with a sigh, as the rain spills out onto the street. But the drain is bursting with life, the slow beat of time turning leaves and guano into a layer of thin soil, blocking the drain ends and forming a tubular home for flowers that bloom bright from the cracked plastic while beetles crawl on their stems.

Christmas comes, and when the office workers retreat for a seasonal drink in the local pub, it is as if a warped mirror is floating above their heads. On the pub tiles, pigeons congregate like the ageing regulars of a working men’s club,their feathers like worn greatcoats. They sit watching the world go by, their companionable silence broken only by the occasional shuffling of wings or muttered coo. But the reflections, the distant echoes, are of no consequence. The two worlds never meet. Those 30 feet are an impassable chasm. The pattering of bird feet across the roof or the call of a magpie fade and mingle into the traffic roar. Hearing it would make no difference. It is only the rooftop, 30 feet up. There is nothing of concern to the pavement people there. 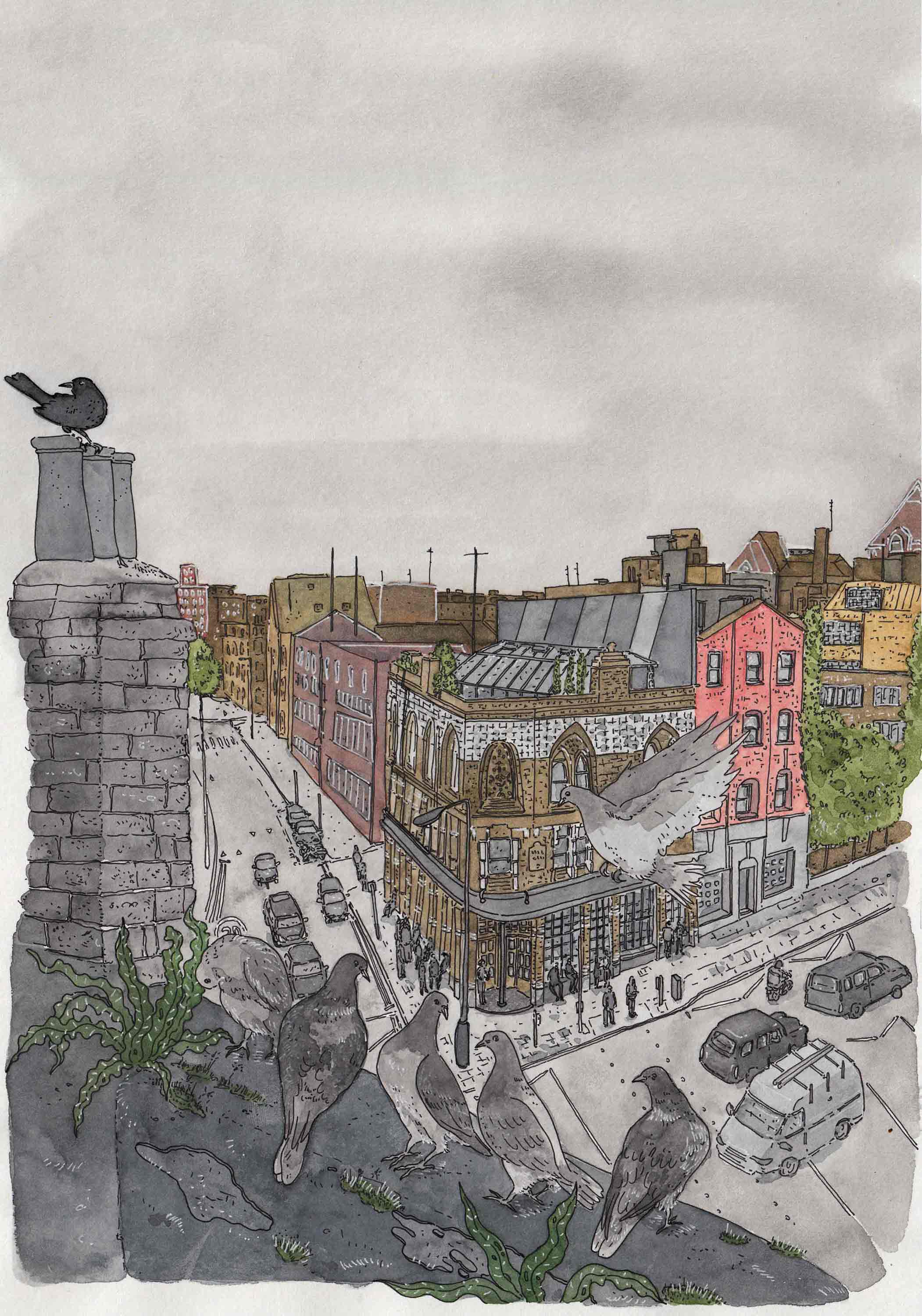 Death: The Giver of Life
Words by Jonny Keen with illustration by Masha Karpushina