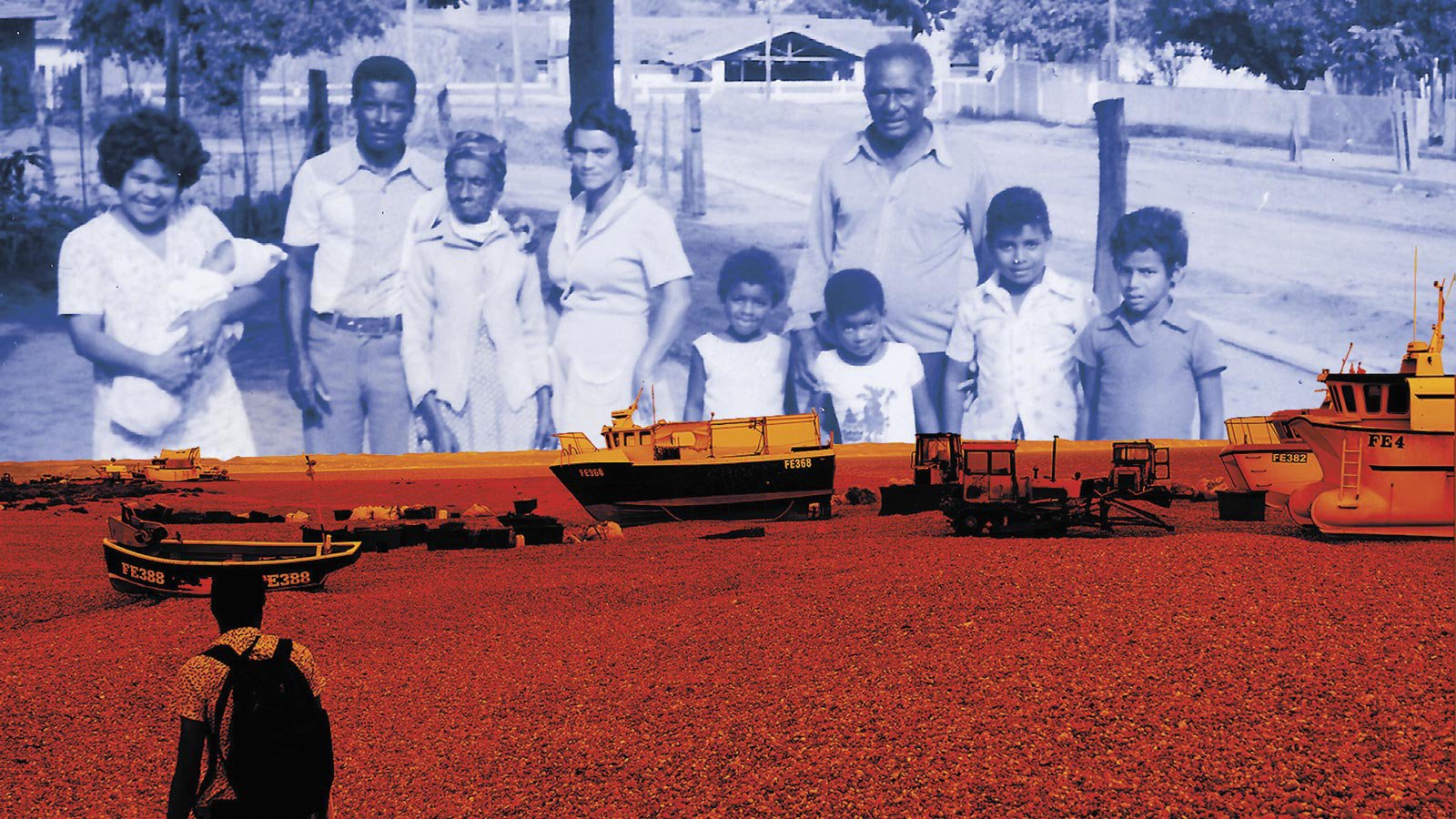 The Call of Time

Words and image by Márcio Cruz

As Black cinema reconnects us with African notions of time, it also allows us to consider a more balanced relationship with life, ancestrality and the environment.

Climate crisis and the rise of sea levels. Drought, famine and entire populations being pushed to crossing continents and seas. Are we experiencing the end of times? According to African and Afro-diasporic cosmogonies, time is composed of events. It is impossible to distinguish time from what takes place, highlights the Senegalese philosopher Souleymane Bachir Diagne in his 2013 book, L’ Encre des Savants (The Ink of Scholars), in which he draws on the thought of Kenyan philosopher John Mbiti. Unlike the western numeric system, African time is defined by natural events such as the sunrise, the sun overhead, and harvest, but also by family events such as birth, marriage and death, as well as by sacred rites. In this context, the past is the most important temporal dimension. The present is nothing more than the continuous movement towards the past, both in the physical or metaphysical sense. The future barely exists, as it is impossible to conceive of an event that has existed in the future. Quoting Mbiti, Diagne writes: “Time is actually a bidimensional phenomenon, with a long past, present and virtually no future.” In the east African languages Kikamba and Kikuyu, according to Mbiti, there are no words to describe an idea of the future.

According to visual artist and writer Rasheed Phillips, from the collective Black Quantum Futurism (BQF), the way that some African peoples understand the cosmos and the universe finds parallel in Quantum physics. BQF bases its main argument on the similarities between the African concept of "Bynum" with quantum physics' ideas of "time symmetry" and "retrocausality". Phillips argues that time occurs as people — not individuals — try to make sense of past and future events. However, the past and future are not fixed - moving continuously back and forward. The realisation of events will also determine when the next enchained event will occur, despite how long it would take for the first to be completed according to Western time-counting.

Candomblé and Umbanda in Brazil, Santería in Cuba, and Voodoo in Haiti, are all Afro-religions that fluctuate between ritual time and the time that rules day-to-day life. When fraternities are confined for the preparation of holy ceremonies, there is a suspension of western time. But these rites are sometimes sped up to accommodate everyday life routines such as work obligations or watching the evening news, says Luciano Tomé, a Brazilian Afro-religious believer based in Mexico, the latter example giving a telling insight into the influence of western media on Afro-religious systems.

The film critic Nwachukwu Frank Ukadike draws on French West Indian psychiatrist Frantz Fanon to remind us that African cultures already had a sophisticated media system before colonisation. This media system was formed by oral storytelling, folklore, sculpture, rites, song and dance and, says Ukadike, “wisdom, knowledge, and national history were conveyed orally from generation to generation”. The academic Ivan Van Sertima - cited in Ukadike’s book, Black African Cinema - says that after what he terms the African Holocaust - the systemic atrocities inflicted on African and Black people that started with slavery and remained through colonialism and capitalism - not only had “family… been disintegrated, kingdoms crumbled” but also the African oral tradition was invaded by Christian rites, the bible, and cinema. Furthermore, this new media system was deliberately deployed to disrupt the Africana beliefs and establish white supremacy and colonisation.

But African and Afro-diasporic filmmakers have succeeded in the creation of a pan-African cinema. The cinema of Senegalese director Ousmane Sembène, Malian director Souleymane Cissé, and Burkinabé filmmaker Idrissa Ouedraogo, among others, has interwoven with movements such as the Latin American Third Cinema, L. A. Rebellion (also known as the Los Angeles School of Black Filmmakers) and the Black British cinema for the development of a filmic expression which recenters Black experience and reclaims Black identity. Whether for their aesthetics, themes or inventiveness, these cinemas also defy notions of western time in film. Today, Black moving image combines cinema and popular culture, while incorporating the new digital technologies, pushing the boundaries between live oral storytelling and the new media tools (user-generated content, computer graphics, virtual reality, and so on).

The archive is a praxis that is at the core of Black filmmaking. The remediation of the archive can activate the past in similar ways that ancestral communities and African peoples do through Afro-religious and cultural practices. Thus, releasing our ancestors from digital gatekeepers as well as national and private museums, libraries, and TV networks is an imperative. It is also essential to acknowledge the archive that performs with and beyond those official colonial collections. Artists and filmmakers can use archive to examine body gestures, food recipes, jokes and anecdotes.

Black filmmaking will rescue Black acting from Black thematic films and soap operas directed by white directors that might not consider the potential replication of violence against Black bodies in the media. Doing so allows Black performance to flourish, as it manipulates the time registry through editing, cutting and sampling, releasing the Black liveliness captive within the frame, scene or sequence.

As time is activated and remediated, humans and non-humans, past and present, new and old, shall glow in the infinity joy of Blackness. The end of the world does not exist as a concept in the Africana belief system. And why should it? Individuals and the community are one and the same. In the present we are constantly moving towards communion with our ancestors, that is the past. Time moves back folded into the fabric of life. Time equals life. As well as birth, seasons, love, sound, harvest and death, time has no end. Answering its calling is our duty.

The Call of Time

Wax and Wane
Words and image by Márcio Cruz 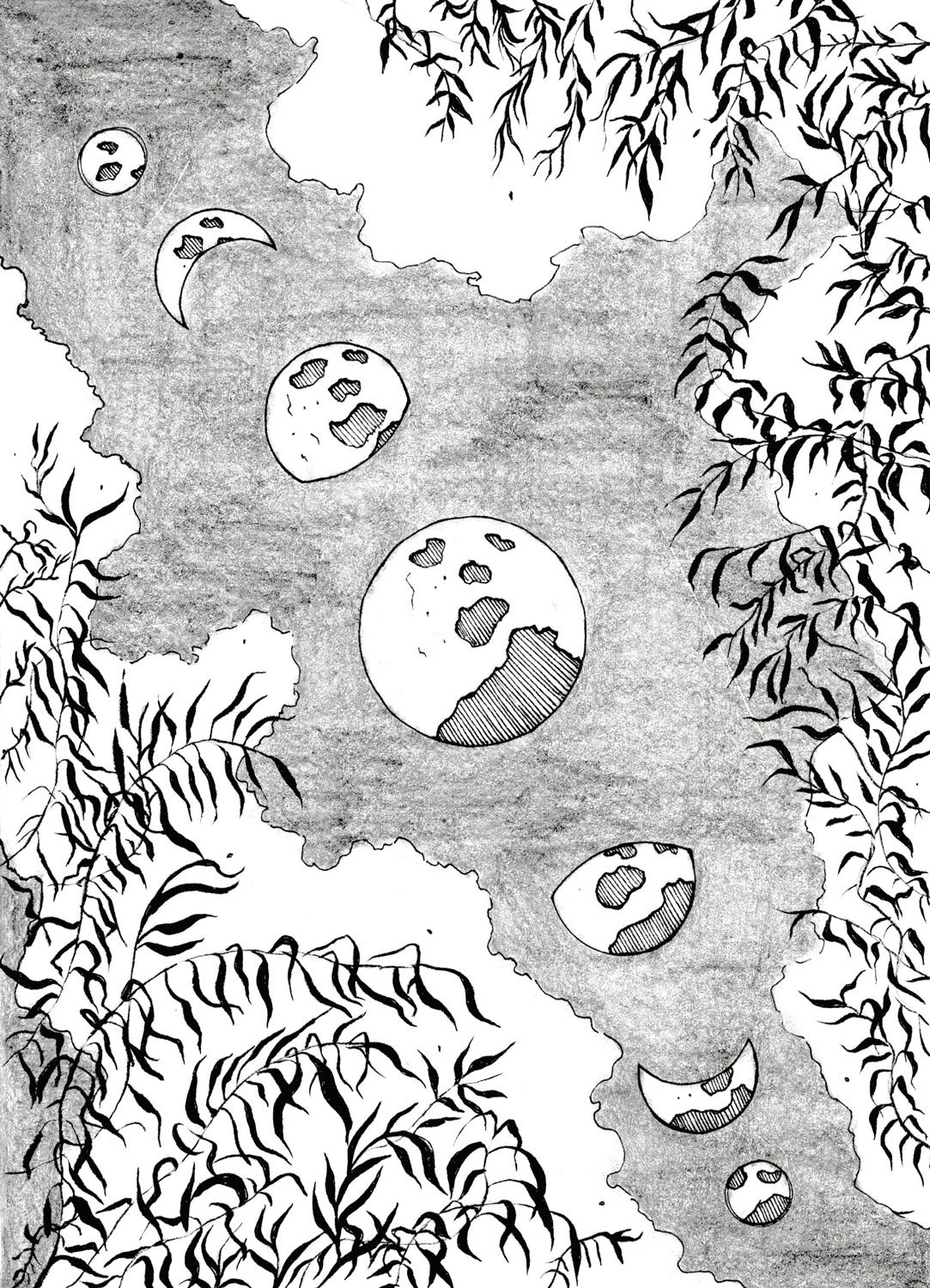