Ourlives are inextricably entangled with the lives of other species. Artists and creatives are attempting to recognise this through reciprocal gestures towards nonhumans.

There is a video on YouTube of biologist and writer Merlin Sheldrake eating a bowl of oyster mushrooms he has grown in the dampened pages of a copy of his book, Entangled Life. The book is all about fungi, which live primarily away from the sight and awareness of human beings. We are all familiar with mushrooms (in fact, most people can’t help pointing them out when they spot them), but a mushroom is merely the fruiting body of a fungus,the vast majority of which exists as a mass of tiny filamental threads underground. Fungi, Sheldrake reminds us, are all around us - they are even inside our bodies.

We rely on them to an extraordinary degree; for the healthy functioning of our skin and gut, and for staple foods such as bread. Many other species live in a similarly symbiotic state with fungi. Much has been made of the “Wood Wide Web” - the mycorrhizal network that connects trees in a forest and helps them to share information and nutrients.The largest known single organism in the world is one of these networks, a fungus in Oregon, US, thought to cover just under four square miles. And before there were trees or animals with backbones, the world played host to enormous mushrooms the size of houses (an extraordinary truth that rivals even the most imaginative fairytale illustrations). Today, fungi are the world’s soil-makers, food-fermenters and plant-keepers, as well as being a valuable source of nutrition in their own right.

If the coronavirus has proved anything, it is that human beings are not the sealed-off individuals we sometimes like to imagine - we are always leaking into the equally leaky realms of other species. Humans, fungi, plants, animals, insects and protists are all co-tenants of the earth. How can we give space and respect to the many nonhumans on which we rely? It’s obvious that we need to nurture and respect plants, animals and microbes, because without them we will become extinct. But in practice this can be difficult in a world of land-grabbing consumerism and a widespread belief that long-memoried trees, rocks, soil and water can be considered “resources” for human utilisation.

For Sheldrake, one answer - both symbolic and literal - is to give his words back to the mushrooms that are the subjects of his book. By offering a copy of his book to fungi, Sheldrake acknowledges the physical and metaphorical debt the book pays to living beings.The acttransforms the abstract notion of “text” into an unpredictable wad of biomass on which the oyster mushrooms feed. Certain areas of environmentally aware architecture and design have made important steps towards creating things for nonhumans, instead of simply about them - projects that don’t just raise awareness, but also provide a physical point of contact between the worlds of different species. London-based PiM.studio Architects, for example, are attempting to “rewild architecture” by deliberately incorporating spaces for animals and insects into their building designs.

Lauren Davies’ Designed Ecology is a multidisciplinary design practice that centres around the theme of ecological equality and the entanglement of human and non-human species. Recent projects include Anti-Anti-Pigeon, a set of instructions for making a simple device to cover anti-pigeon spikes, allowing birds to land on urban surfaces once more. The project Modular Habitats 2.0 similarly encourages nonhuman life in cities through a series of simple habitat boxes that can be put up almost anywhere and offer homes to birds, bats,rodents or even plants. Embracing a more organic aesthetic, the sculptural objects created by French designer Marlene Huissoud look like furniture designed for human beings, but in fact they are riddled with small holes and intended to be homes for insects.

Such projects take the radical step of imagining nonhumans as recipients, users or even viewers of designed objects. Art made for nonhumans can be harderto find or define.Artists do not usually work to a brief and they do not have to imagine a “client” or user for what they make. However, artists sometimes take inspiration from design principles in order to give something back to other species. One example is Equity for Pigs, an ongoing collaborative project by artists Andrea Roe and Cath Keay. The goal is to improve the quality of life of intensively reared pigs by creating edible enrichment toys for them

Roe and Keay found a way to create toys from a material made of spent brewer’s mash (from a local brewery) and mycelium (derived from fungi). As well as offering the animals food and fun, Equity for Pigs reutilises waste material back into the food chain and aims to create a circular economy around brewing and pig farming that benefits both humans and animals. The project highlights pigs’ identities as individuals, keeping at its heart the question: what matters most to pigs? It’s notable that artworks created for or with other species are often ongoing durational projects,rather than one-off actions; there is a sense of working at an alternative timescale determined by the nonhuman participants orthe cycles ofthe seasons, rather than the hectic artworld calendar or the demands of the market.

For example, artist Korallia Stergides has been working towards a sculptural installation that functions as both a birdbath and a sundial.The marble surface will be etched with illustrations of interactions between humans and nonhumans. Water will gather in the crevices of the drawings, which will be illuminated according to the weather and the slowly turning shadow of the sundial. Stergides hopes that the shifting light and the possibility that a bird might alight to bathe in the water, will encourage audiences to linger, evoking what she calls “this sense of stretching time associated with a work for an audience that is not human”.

For artist Louise Hildreth - whose work illustrates this piece - art-making and the seasonal processes of gardening are closely intertwined. Over the past year, she has been artist-in-residence at Tower Hamlets cemetery in East London, where a forest springs up among the gravestones. Working primarily with natural materials harvested from the site, Hildreth uses a getting her-hands-dirty approach to making work with and for the ecosystem, which is also her inspiration and subject.

As with Roe and Keay’s Equity for Pigs project, there is a sense of coming full circle; of creating or becoming part of a looped and networked system that elides subject and object, audience and participants, human and nonhuman. Among the greens, browns and greys of weathered stone and gnarled trees, flashes ofred and yellow appear beside the turns of the paths.

Where trees have large “wounds” or slow-closing cracks, Hildreth has applied a salve of cob - a traditional mixture of clay, soil, sand and straw.Before the mixture dries, Hildreth presses rows of gathered yellow, orange and red berries into the surface. The results evoke mosaics or stained glass windows; openings into an alternative world in which care for the natural world is part of daily life. These berry mosaics serve another purpose as feeders for the cemetery’s diverse bird population; bright punctuation marks, perhaps, on a blackbird or robin’s route through the forest. Hildreth has also worked with members of the local community to create handmade hanging cob birdfeeders, which can be suspended from branches in the park and nearby gardens and loaded with a tribute of seeds or grains. Simple gifts can be powerful gestures. Elsewhere among the trees, Hildreth has twisted sticks together with twine to make curving ladders resembling rustic strands of DNA.

As well as reminding us that we share the vast majority of our genetic material with other species, they also act as fanciful stairways for squirrels; a place of safety for tired wildlife. Hildreth’s impermanent interventions are intended to change over time; eventually, the berry mosaics will be eaten by the birds and the clay mixture will be washed away by the rain. This is a practice of quiet respect and listening to the landscape’s needs. For Fiona MacDonald, who works under the name Feral Practice, art can offer an exploration of the relationships between humans and nonhumans on a uniquely intimate scale.

‘This is a practice of quiet respect and listening to the landscape’s needs.’

In an alternative to scientific enquiry, which is typically carefully restricted, Feral Practice’s Ant-ic Actions project incorporates open-ended and responsive investigation into ant populations, recognising the insects as active participants in the co-production of the artwork. Working with paper placed over ant colonies in their woodland nests and drops of watered-down food colouring as a drawing tool and “edible offering”, the project aims to use materials appropriate for both humans and ants. The intention is to create participatory paintings led by “ant-ic” movements, bringing the bodily and perceptual worlds of two species into closer dialogue.

MacDonald describes this co-productive actin tellingly physical terms: “Thin lilac paper structures were cut to size and fitted to each ant nest like a loose suit,pinned into place as ifto a dressmaker’s dummy.The mark-making (otherthan initial blobs of food colouring and gravity-guided drips) was created by the ants themselves… most ants rushed up to a wet patch of colour,feelered it and dashed off. Some drank it enthusiastically. Some headed straight on in to the puddle. Fewer still… seemed to get obsessed with the puddles, moving from one to another repeatedly, running through them and drawing beautifully as they did so.” While such symbiotic creations feel radical to western viewers - trained in the post-Enlightenment school of individualism and the veneration of lonely artistic genius - in fact they have a long history of antecedents and contemporary practices among non-western modes of being, such as those found within Indigenous communities.

Robin Wall Kimmerer, the botanist and author of the bestseller Braiding Sweetgrass: Indigenous Wisdom, Scientific Knowledge, and the Teachings of Plants, persuasively argues for a system of reciprocity between humans and plants - something which, she points out, is at the heart of many Indigenous cultures. She draws attention, for instance, to plants used by humans that can best reproduce themselves through human intervention. Maize, the mother-plant of the American continents, can only disseminate its seeds if people work to extract them from the hard husk. The maize has cultivated us as much as we cultivated it,though the subjection of maize to industrial agriculture has broken this circle of symbiosis. Kimmerer also tells the Potawatomi creation story of the Skywoman, whose fall from the heavens towards a world of water was broken by a flock of friendly geese.

The water-bound animals knew that the Skywoman needed land to live on, so they dived down to find mud for her, which she spread on a turtle’s back and danced into an island. In return, the Skywoman shared a handful of seeds she had brought from the celestial tree of life, causing all varieties of plants to grow and providing food for the animals that had helped her. And so the earth came into being - as a collaboration between species, in which human beings are recognised as an integrated part of a living community of creators. There is a growing call from artists, ecologists and gardeners to follow this beautiful model of interspecies mutual aid; what Kimmerer calls “restorative reciprocity”. Open-ended creativity can help us to recognise that ourlives are already inextricably entangled across the boundaries of species and geographies. From mushrooms to ants to birds,we have much to learn from our companions on the planet. Perhaps we can start by helping to create spaces in which they can flourish. 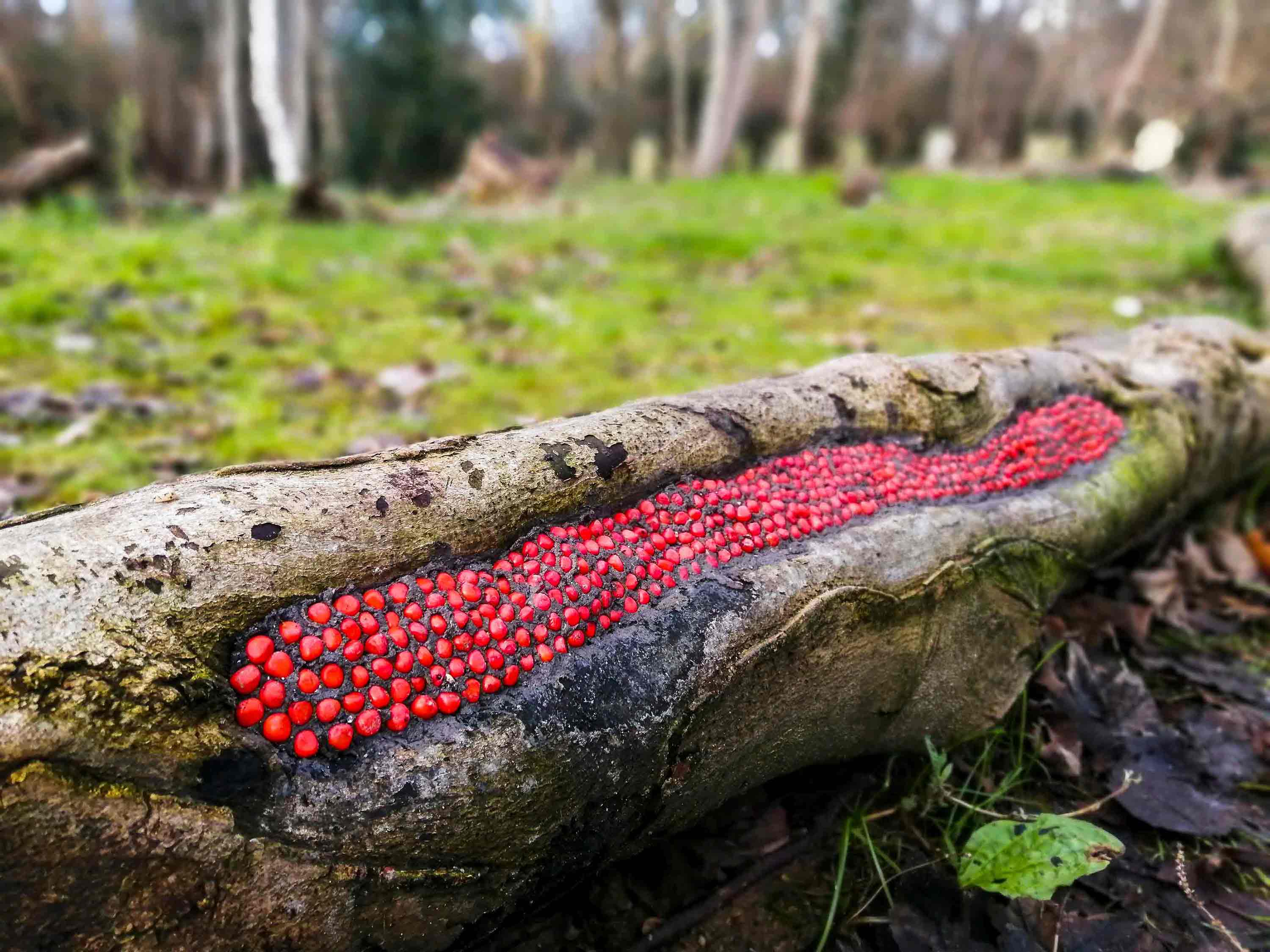 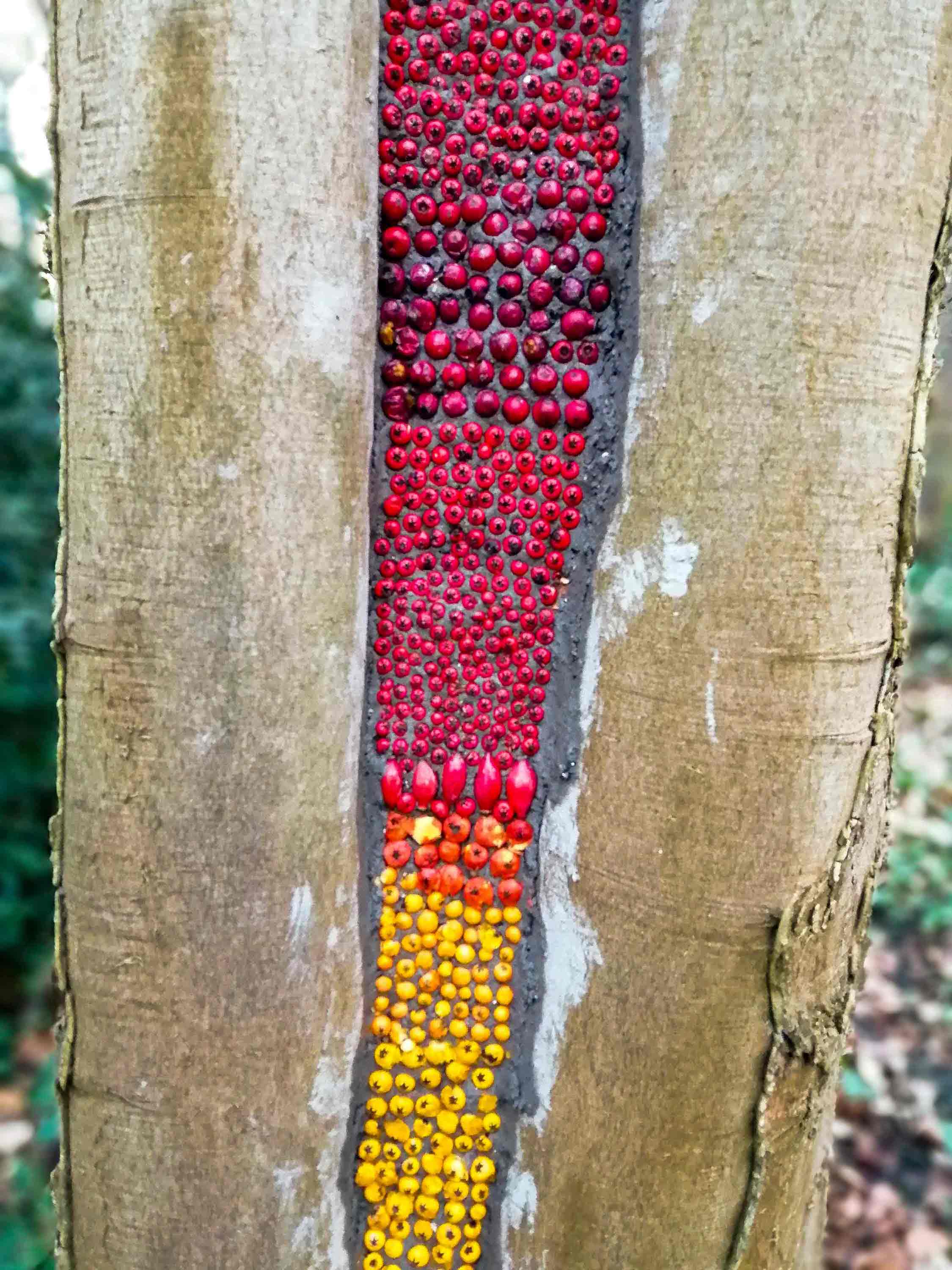 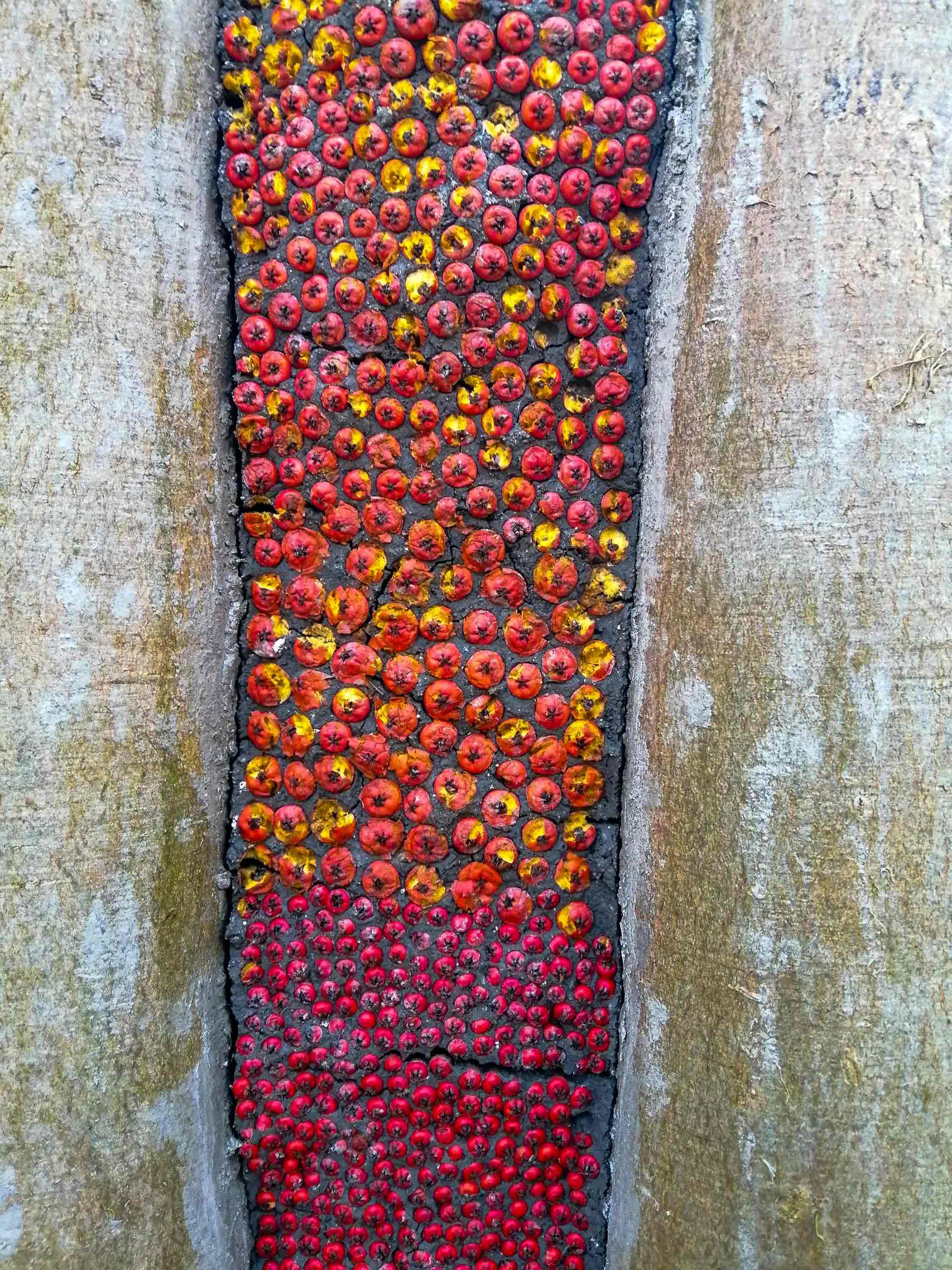 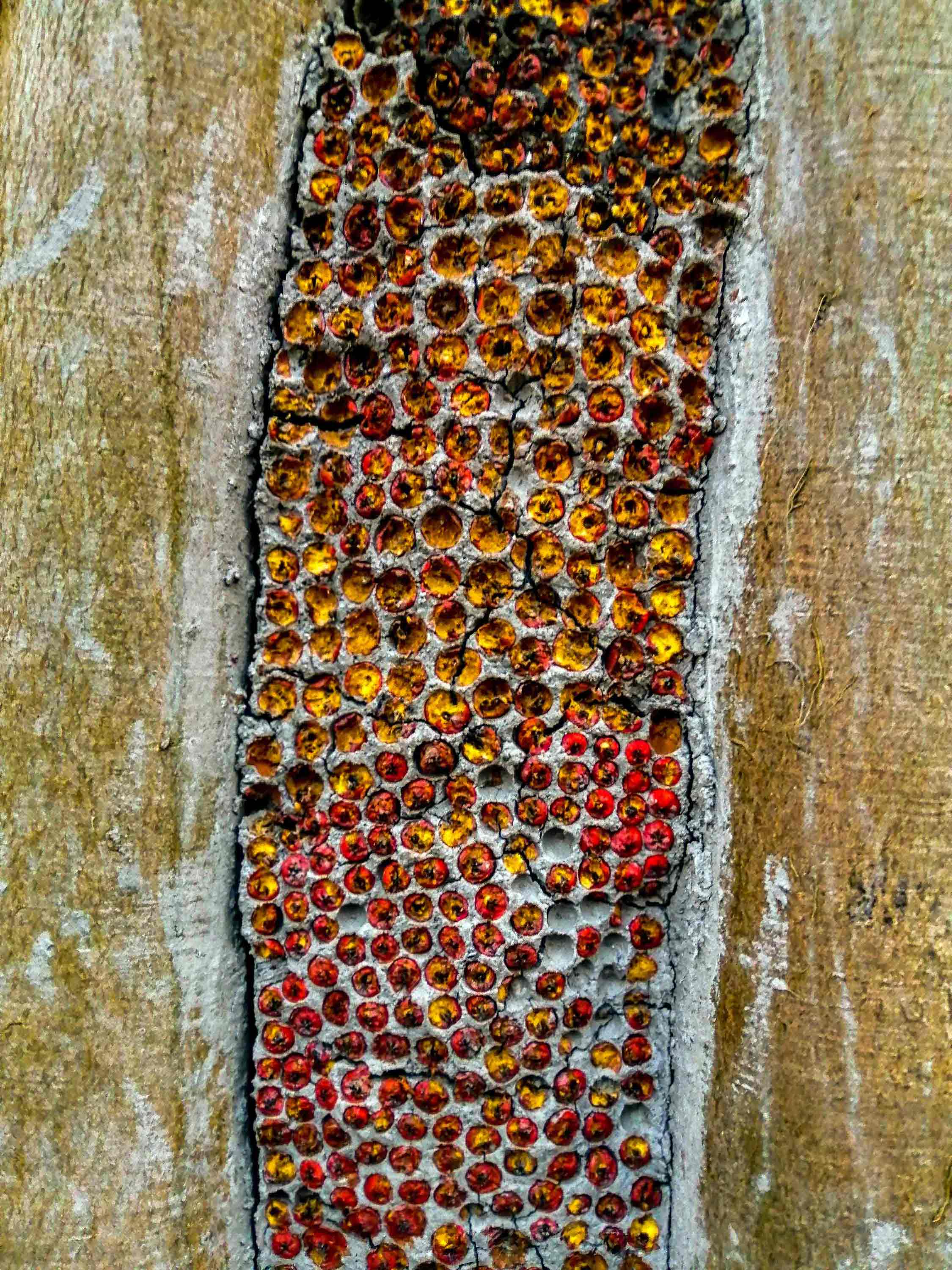 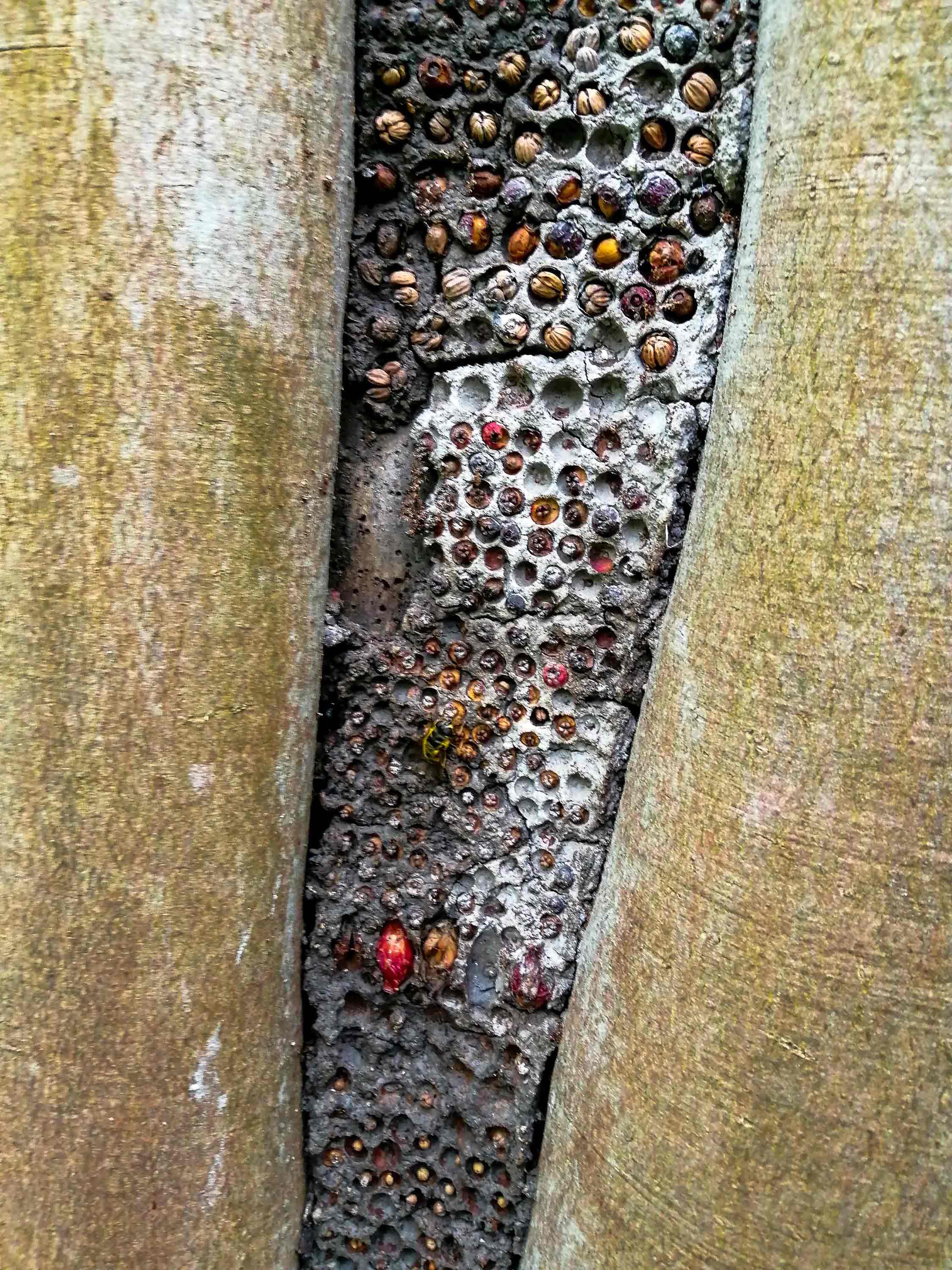 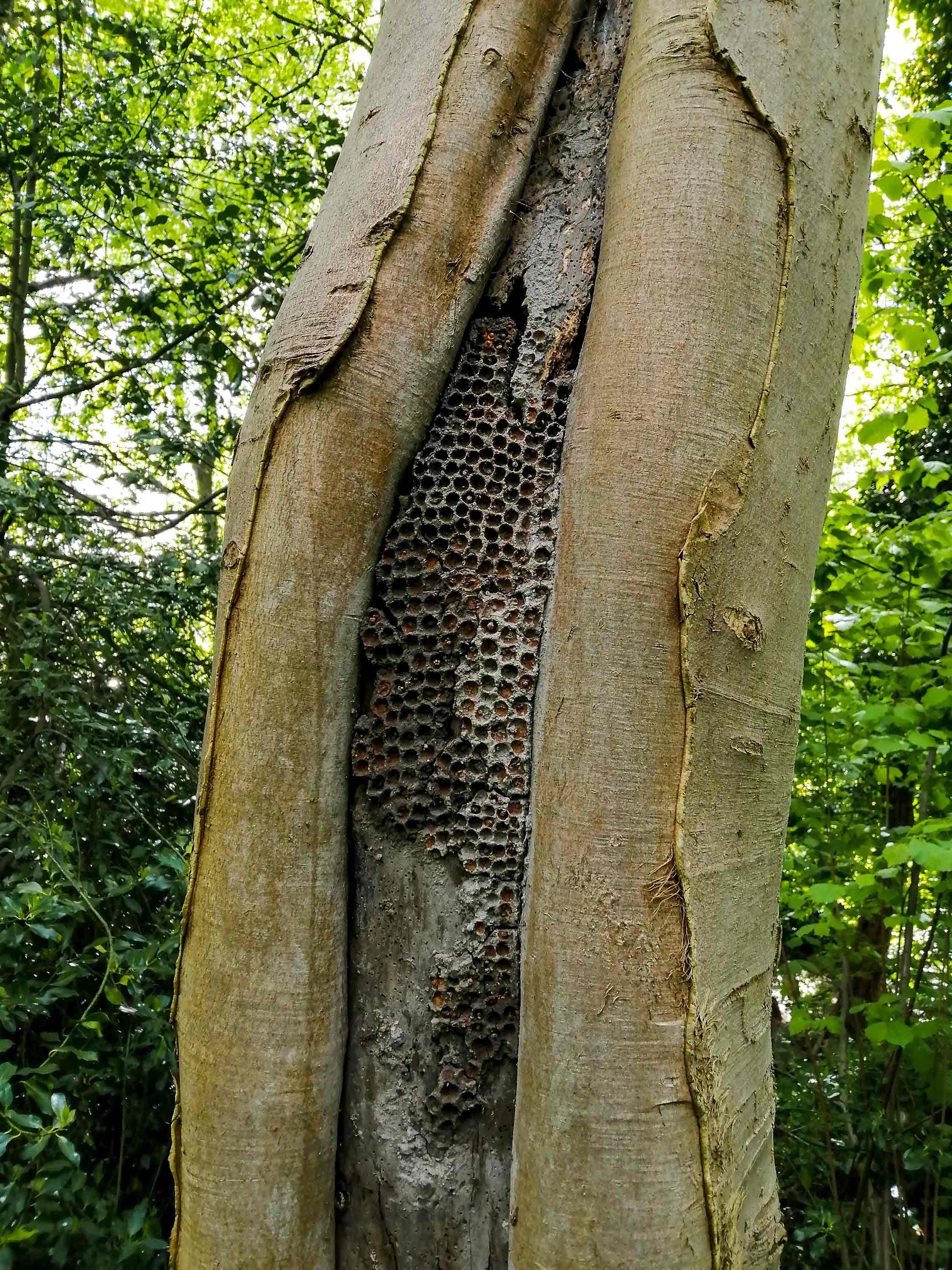 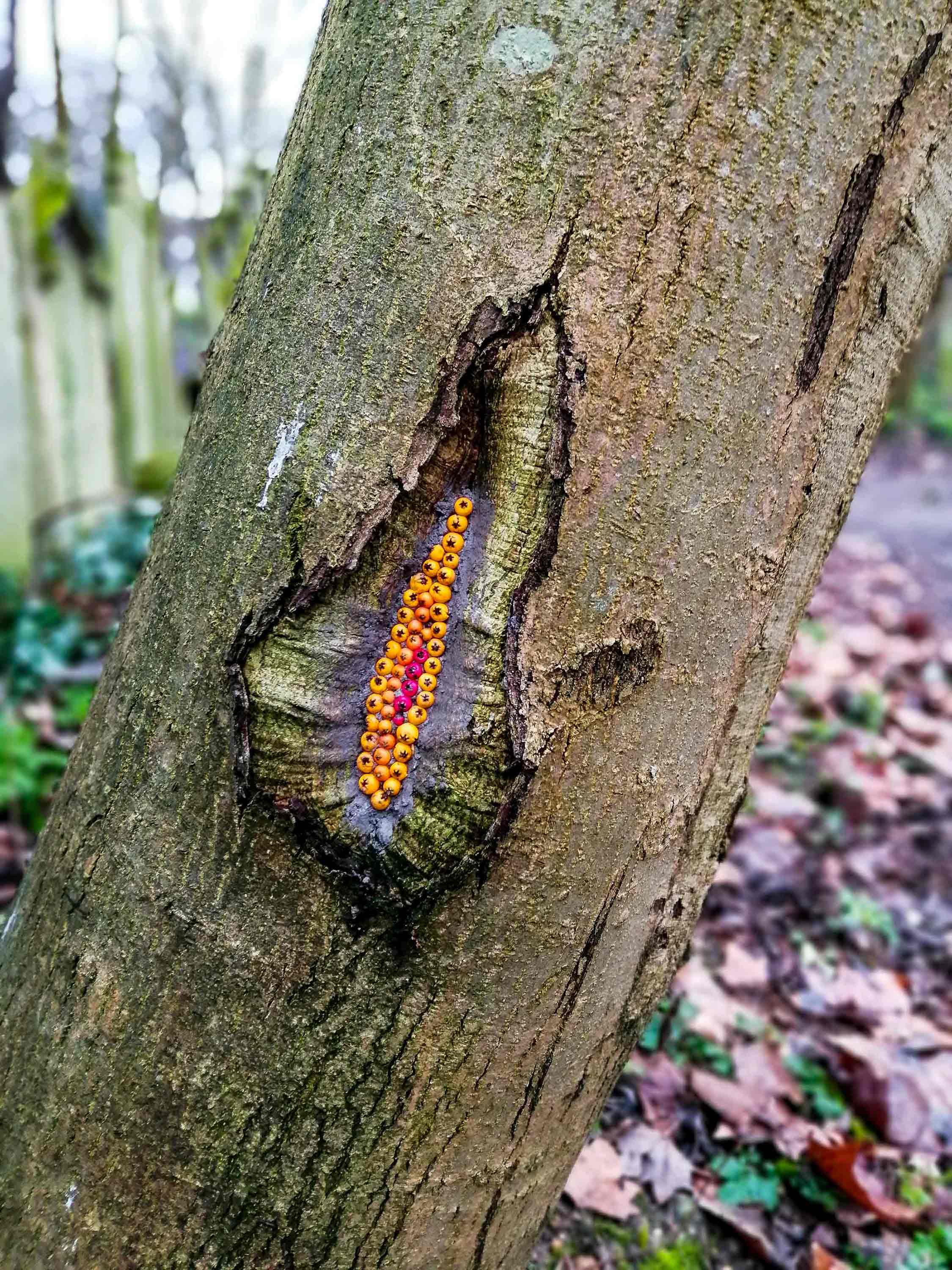 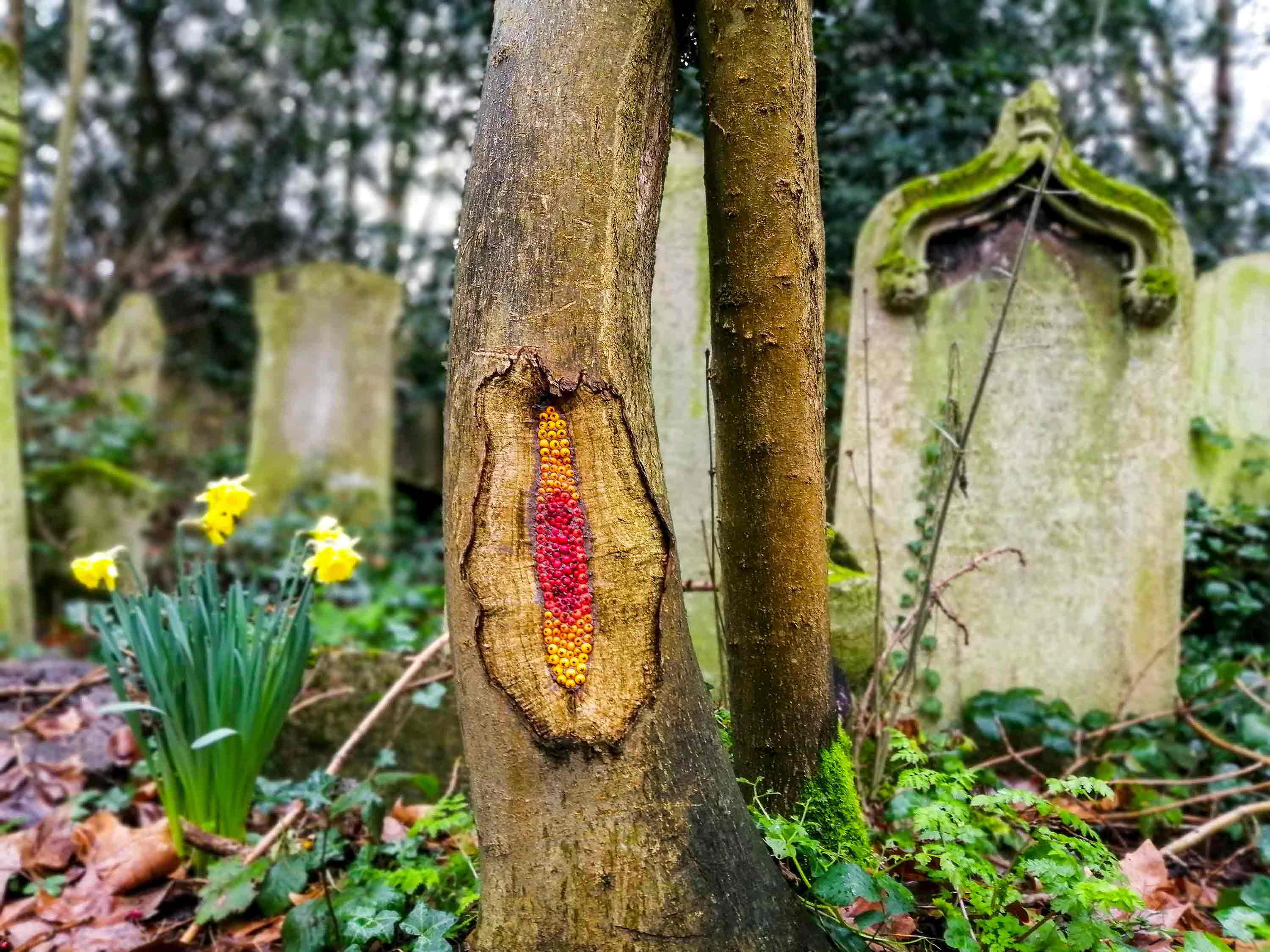 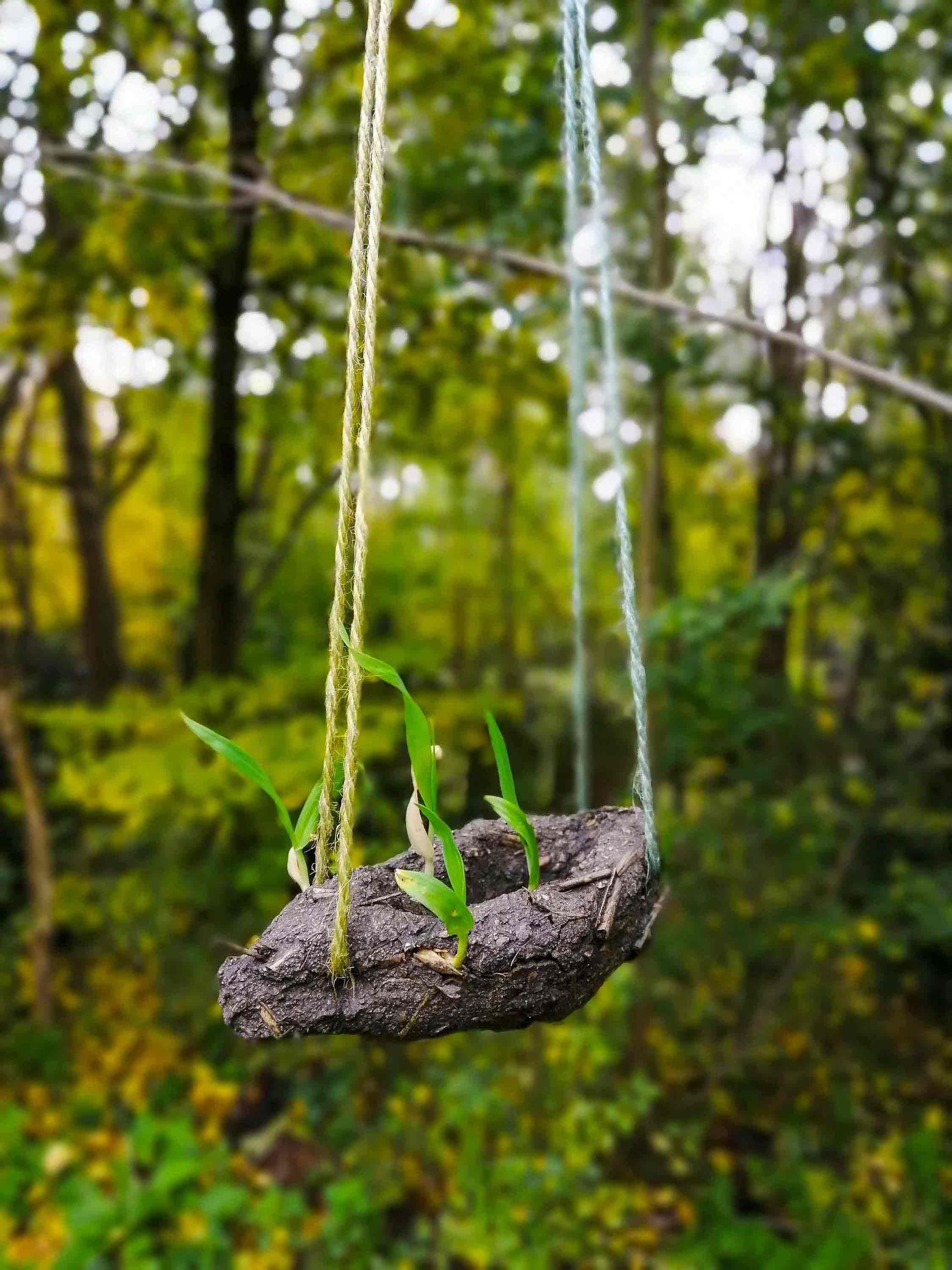 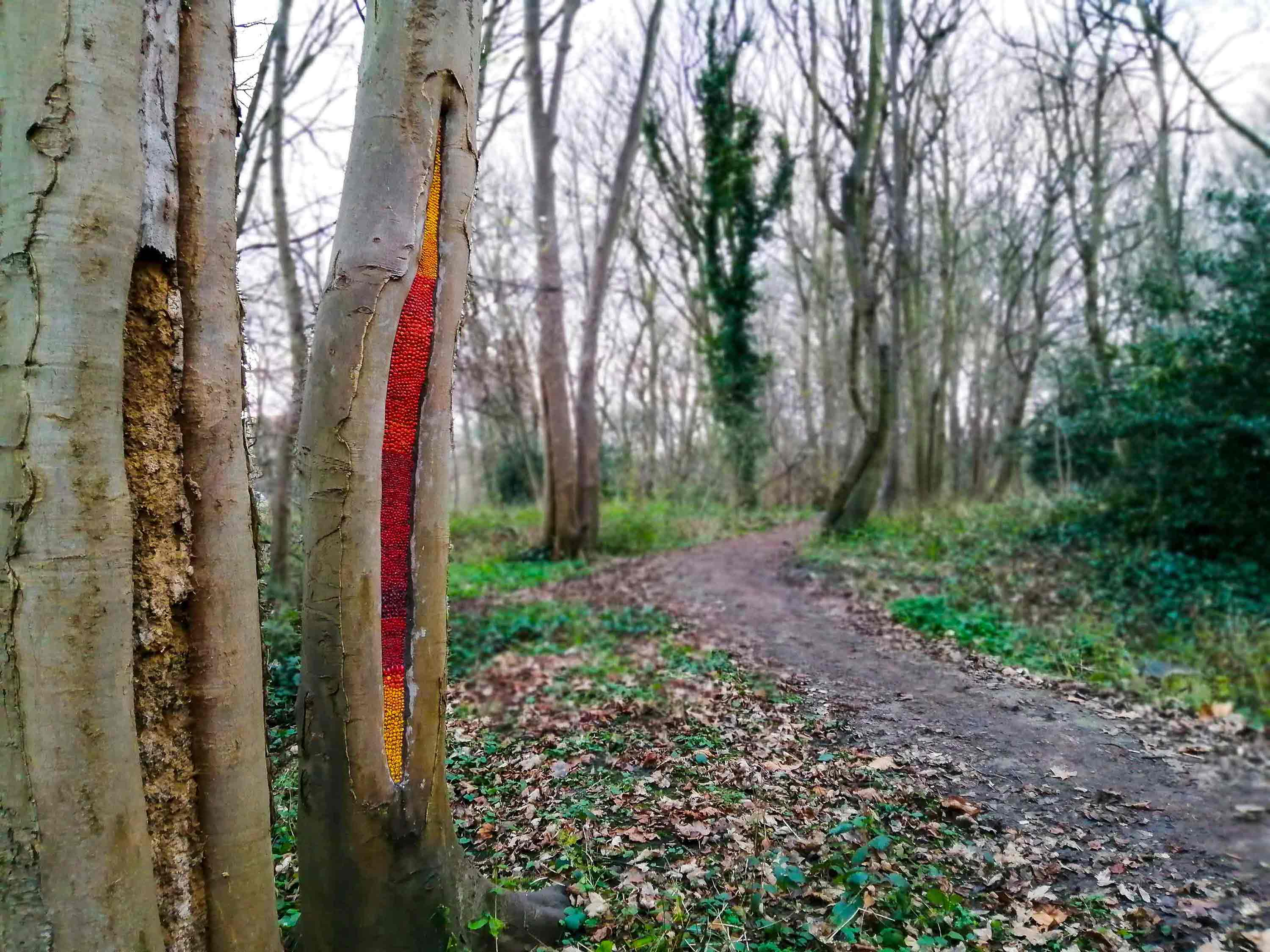 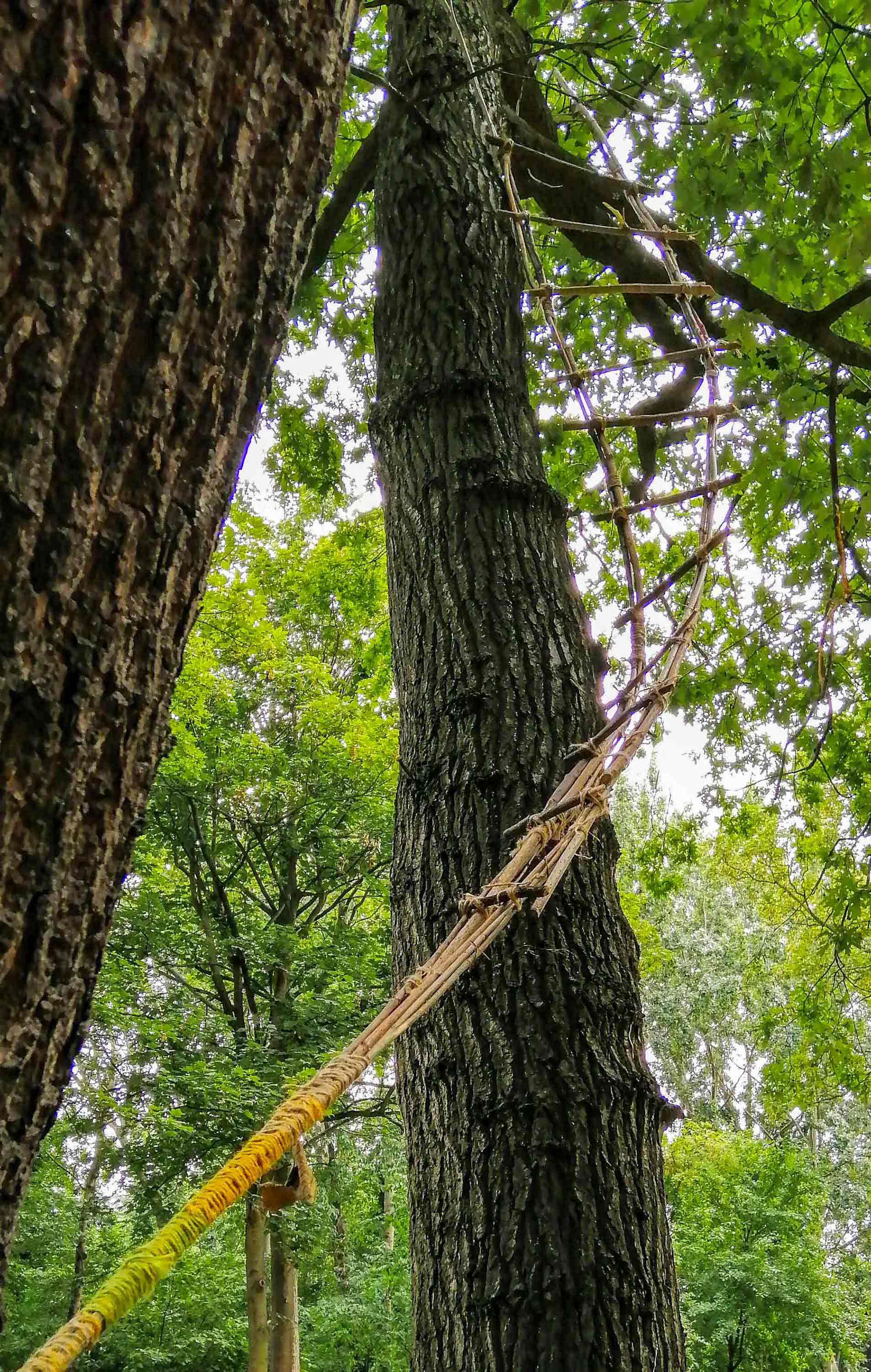 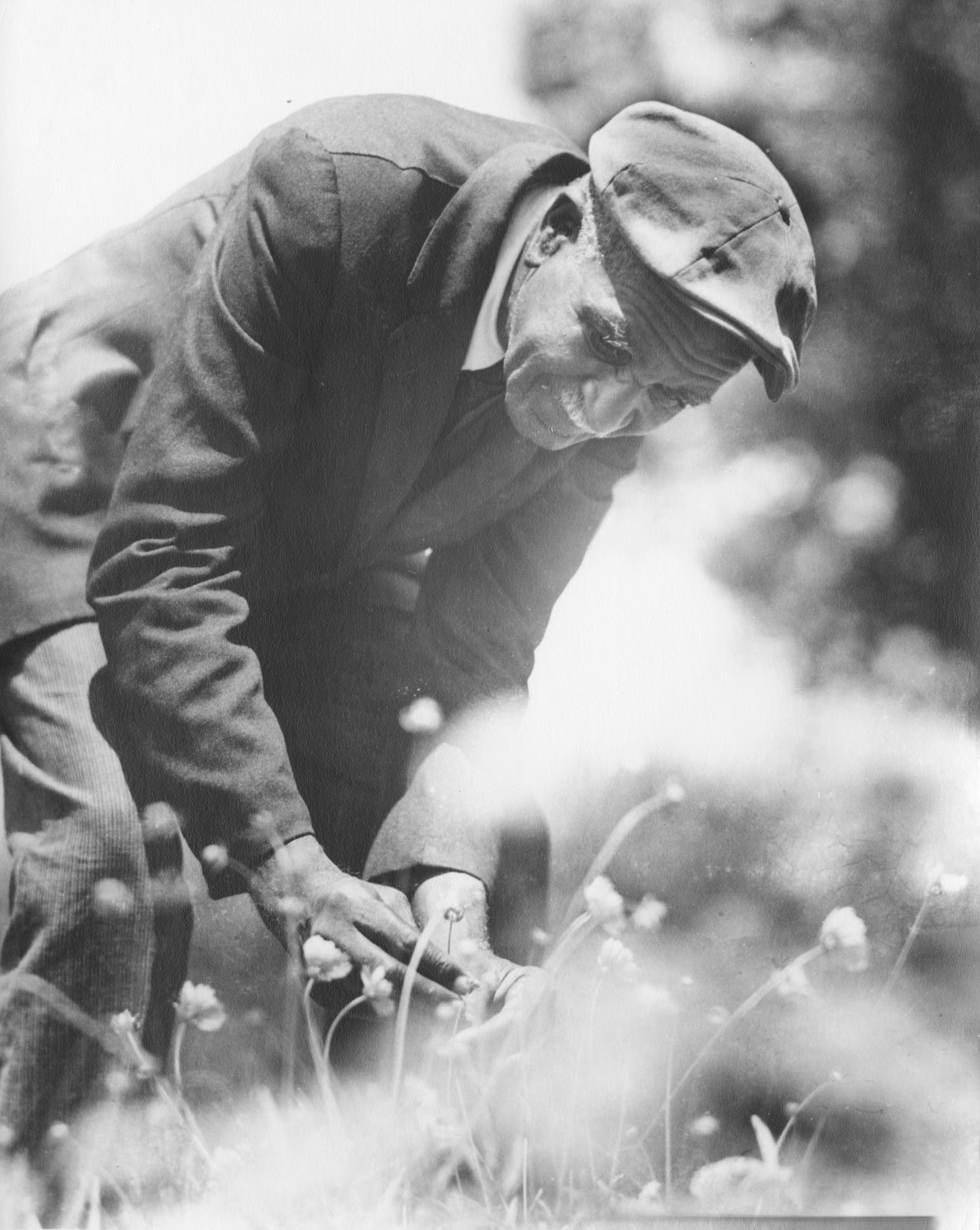