André Tranquilini is the estate manager at Waltham Place, a 220 acre organic and biodynamic farm and garden in Berkshire, UK. Originally from Brazil, he has worked extensively as a market gardener and outdoor teacher, and is a founding member of the biodynamic seed company, Living Seeds, in Portugal. André has worked on farms in Brazil, Portugal and the UK, and has travelled widely, teaching workshops and lecturing on biodynamics. He talks to OmVed Gardens’ head gardener, Vicky Chown.

Vicky and André during their interview at OmVed Gardens.

Vicky: Before we get into the details of what biodynamic farming and gardening is all about, we would love to know a bit about your background and your trajectory.

André: I’m from Sao Paulo, Brazil, where I originally studied media and communications and was involved in a collective art studio. My motivations to start gardening and farming started there, prompting me to change my career. So I moved to the UK to study biodynamic agriculture at Emerson College. Then I worked as an outdoor teacher for many years in Devon, developing the South Devon Steiner School garden and environmental curriculum, imbuing it with respect for the Earth and teaching land-based skills. I then relocated to Portugal to start Living Seeds, a biodynamic seed company, and now I’m back in the UK as estate manager at Waltham Place Farm.

Vicky: At OmVed, we are very interested in biodynamic gardening because we practice permaculture: can you describe what biodynamic farming is, particularly in comparison to permaculture?

André: Biodynamic farming is the oldest form of organic agriculture - or at least the oldest one that is certified and with standards. It started in 1924 and could be considered the inspiration for other movements that subsequently followed, from organic agriculture to permaculture, which all have a connection to the biodynamic movement in one way or another.

In practical terms, the movement shares with permaculture theåbelief that all the different activities within the farm support each other: the gardens, the livestock production and the ecological infrastructure. What differentiates them is that one of the key aspects of biodynamic farming is the creation of the farm organism: the idea that the human organism is the model and the starting point for the farm organism was suggested by Rudolf Steiner. According to his worldview, which built the foundations of biodynamic agriculture, the human organism has got a physical body, an etheric body and astral body, and a spiritual body. In essence, what we’re trying to do by creating the self-sustaining cycles within the farm, is allowing the farm to become an individual, like a human being, with its own spiritual individuality.

Vicky: One thing that really drew me into exploring biodynamic farming was the cyclical nature of it. In any gardener’s year, we have a cyclical nature too: we can’t get away from the fact that spring is when we sow most of our crops from seed. And then, in the summer, we’re looking at tending them and possibly early harvest, then later on in the summer, you’ve got more harvests. But in biodynamic farming or growing, there seems to be so many cycles within cycles. You’ve got a lunar cycle, the solar cycles, and even day cycles.

André: I suppose one could say that cycles are everywhere in life. Anything living is in in a constant movement of change. A very simple observation that I love doing is to look at a plant to see if it is contracting or expanding. What we’re trying to do in biodynamic farming and gardening is to work with those rhythms in an optimal manner. The more in line we are in the rhythmical nature of our planet, the more vitality our food will have. You go with the seasons, work with the polarities of the day and night and the rhythms of growth, which are, again, linked to the seasons, and you observe a lot.

Vicky: I believe you also work with a special planting calendar that relates to all those rhythms and cycles?

André: In biodynamic gardening and farming, we work with a planting calendar that looks at the moon cycles specifically, as a complement to the sun cycles, which we all follow. For instance, we are looking not only at the stage of the moon in the course of the month, we’re also looking at the apogee and the perigee, which indicates how close or how far the moon is from the Earth. The other lunar cycle that we’re looking at is at the position of the moon in relation to the constellations. All that will determine and, hopefully, support the planning of different activities: harvesting, sowing, planting and even the making of biodynamic preparations.

The Square Garden at Waltham Place.

Vicky and André during their interview at OmVed Gardens. 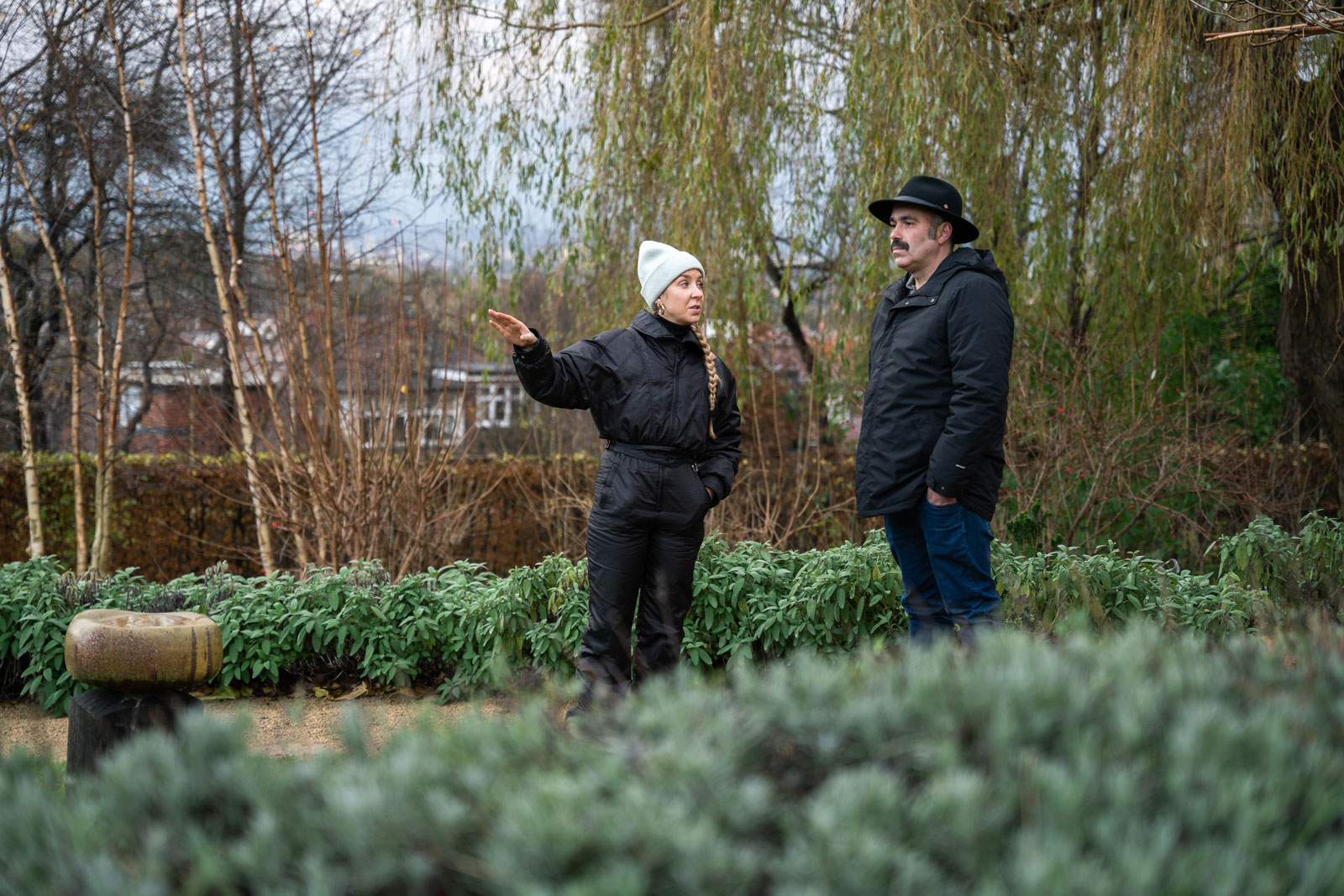 The potager and glasshouse at Waltham Place. 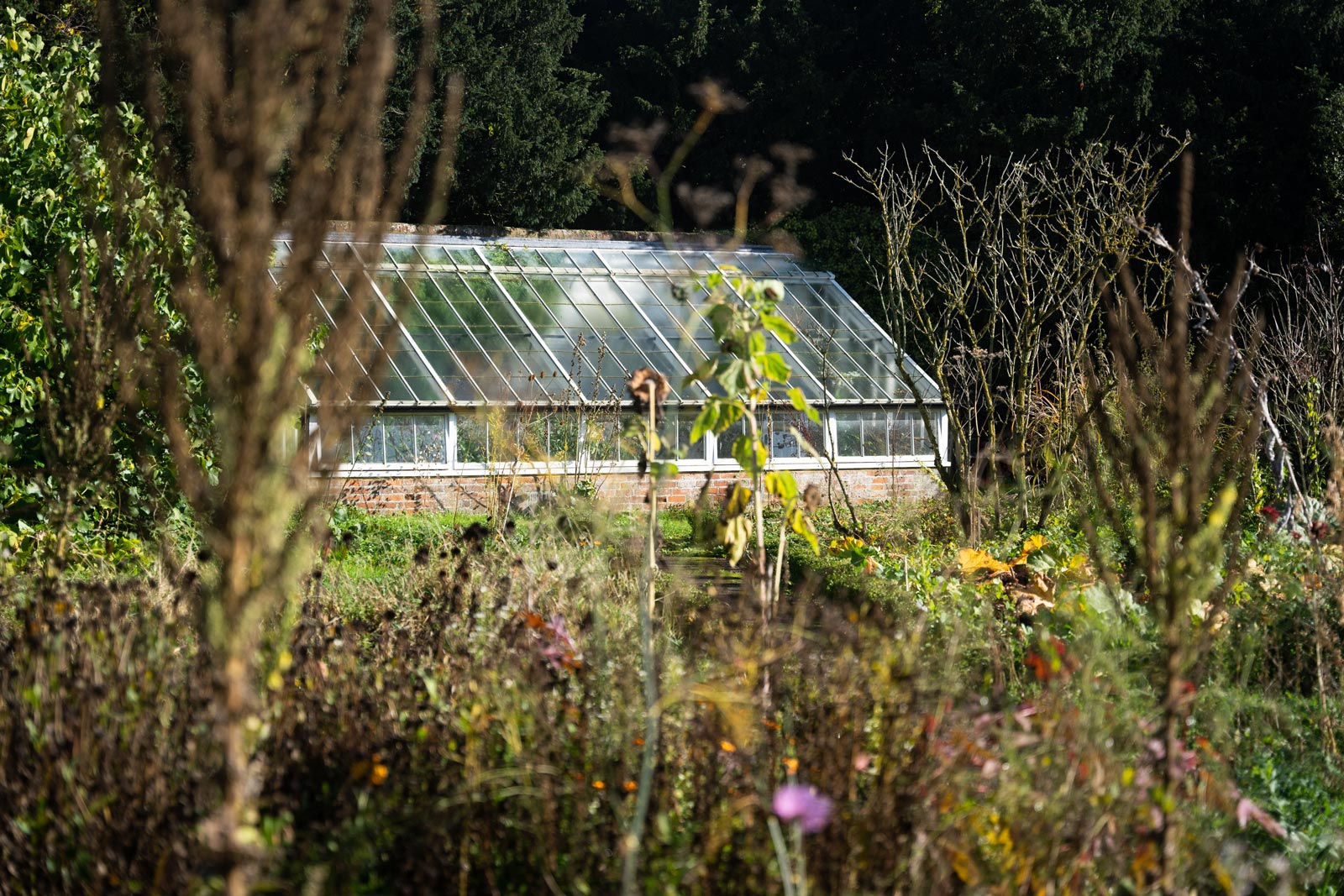 A wormery made from an old bath tub. 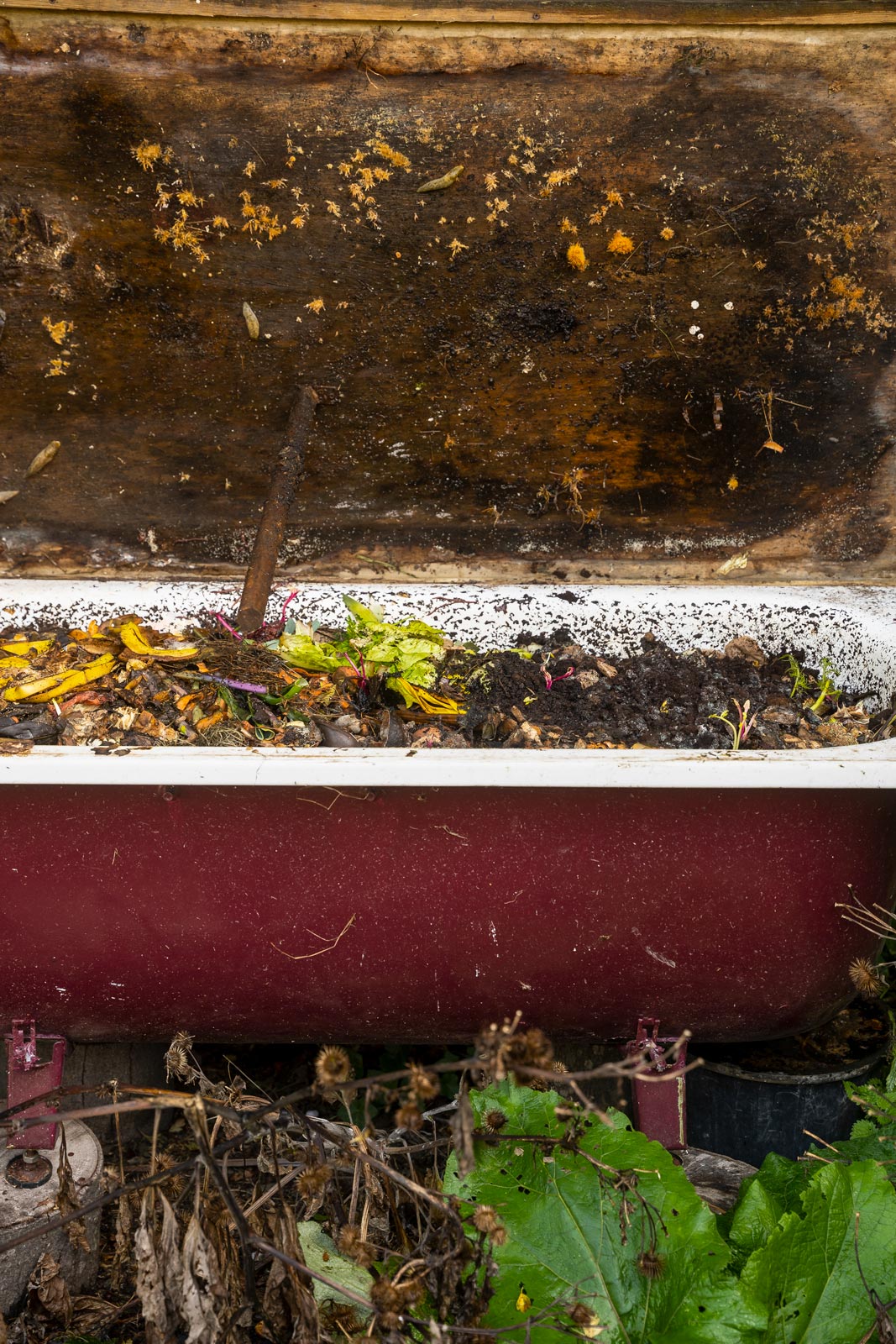 There are three cowpat pits where cow manure, basalt, eggshells and biodynamic compost preparations are left to ferment for around six months. Uses for the ferment include compost teas, seed baths, tree pastes (mixed with clay to seal pruning cuts) and root dip. 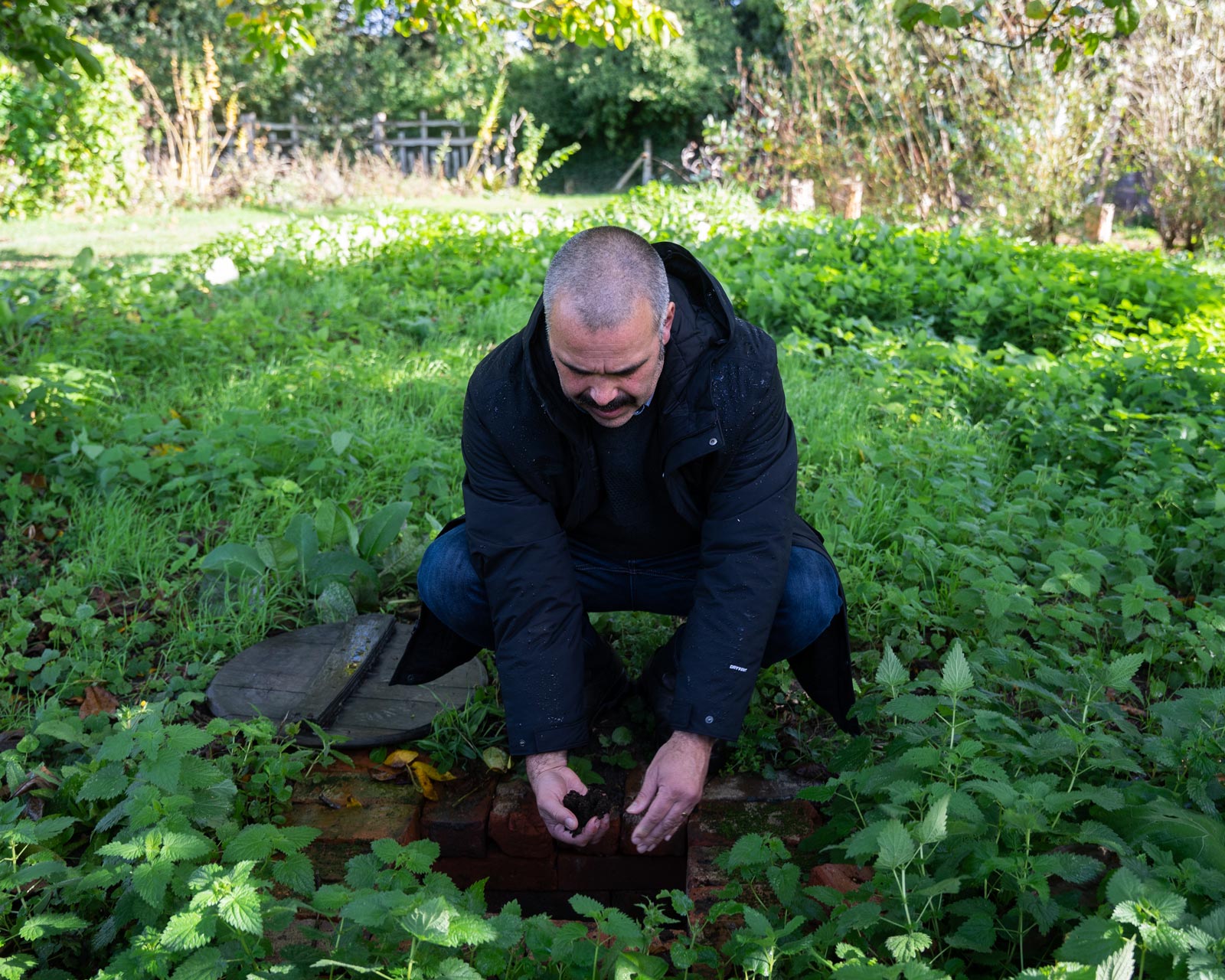 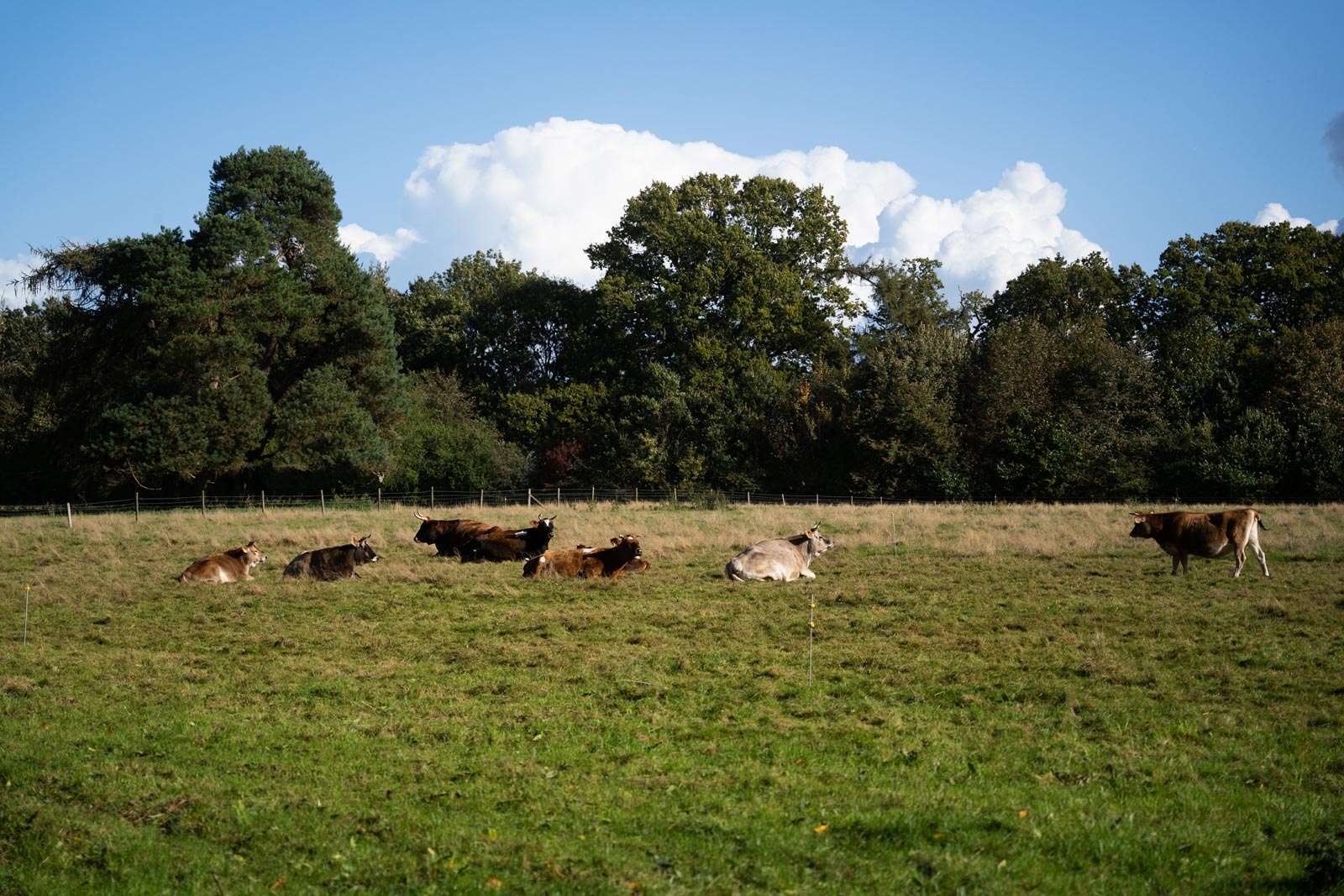 The market garden with winter crops. 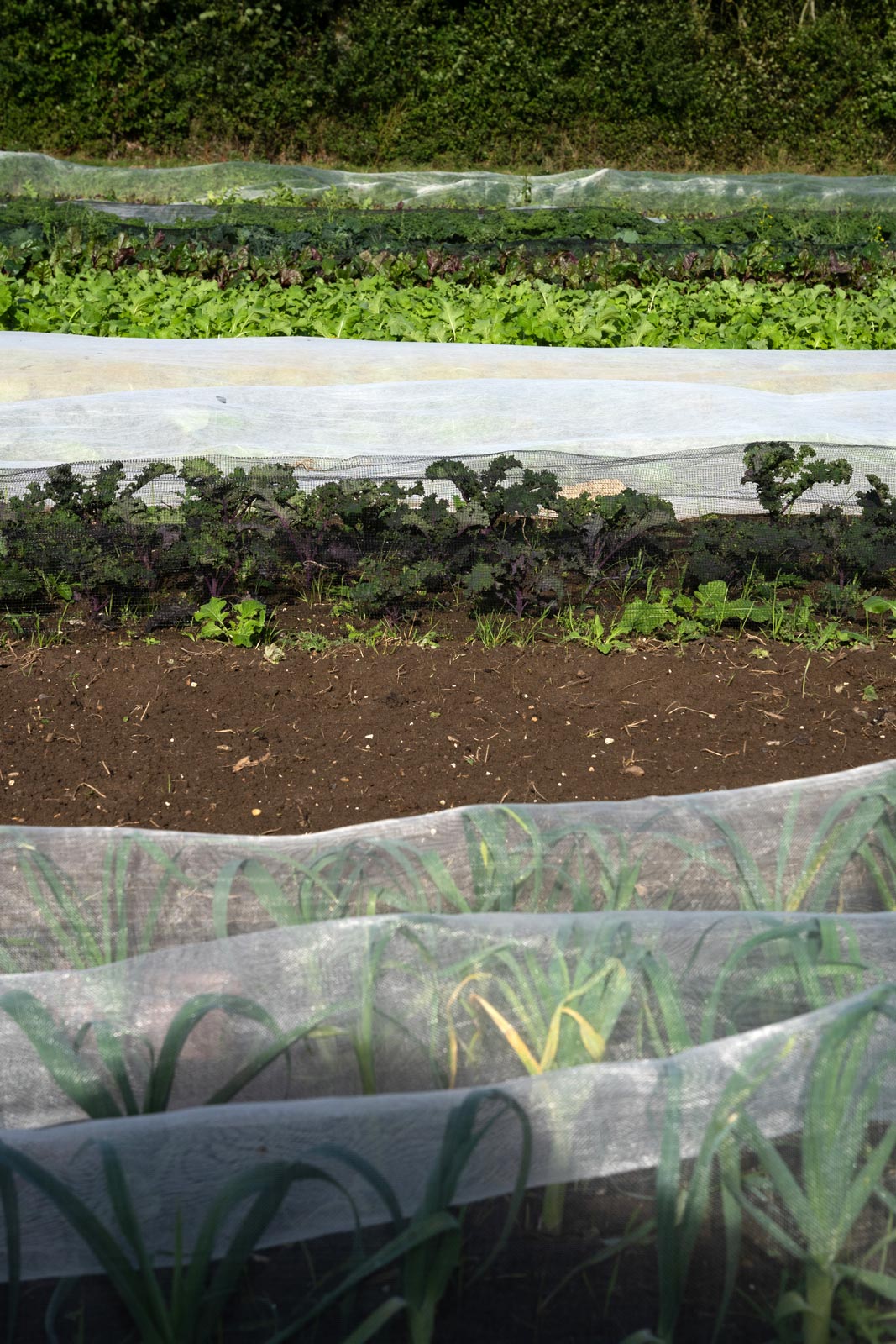 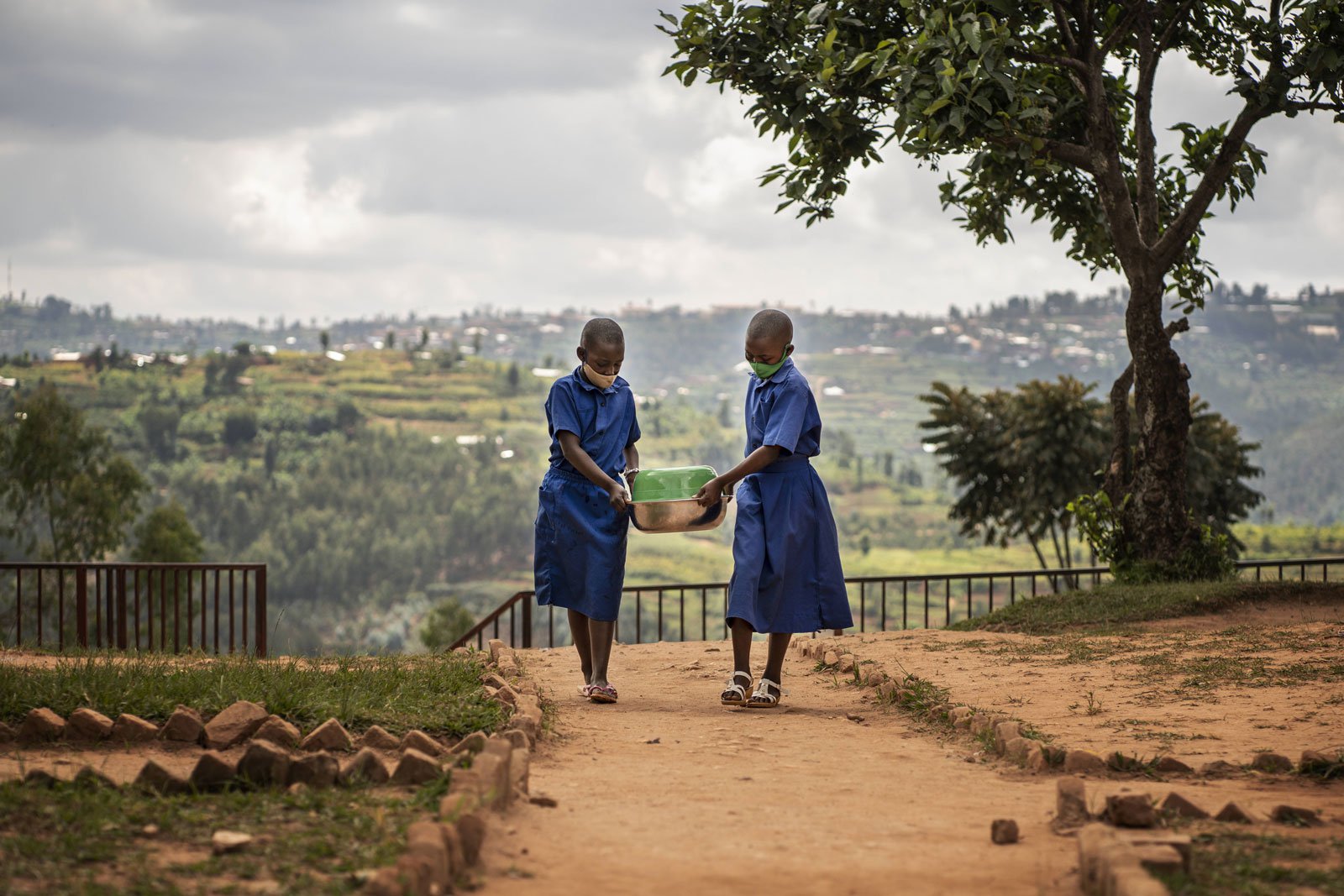 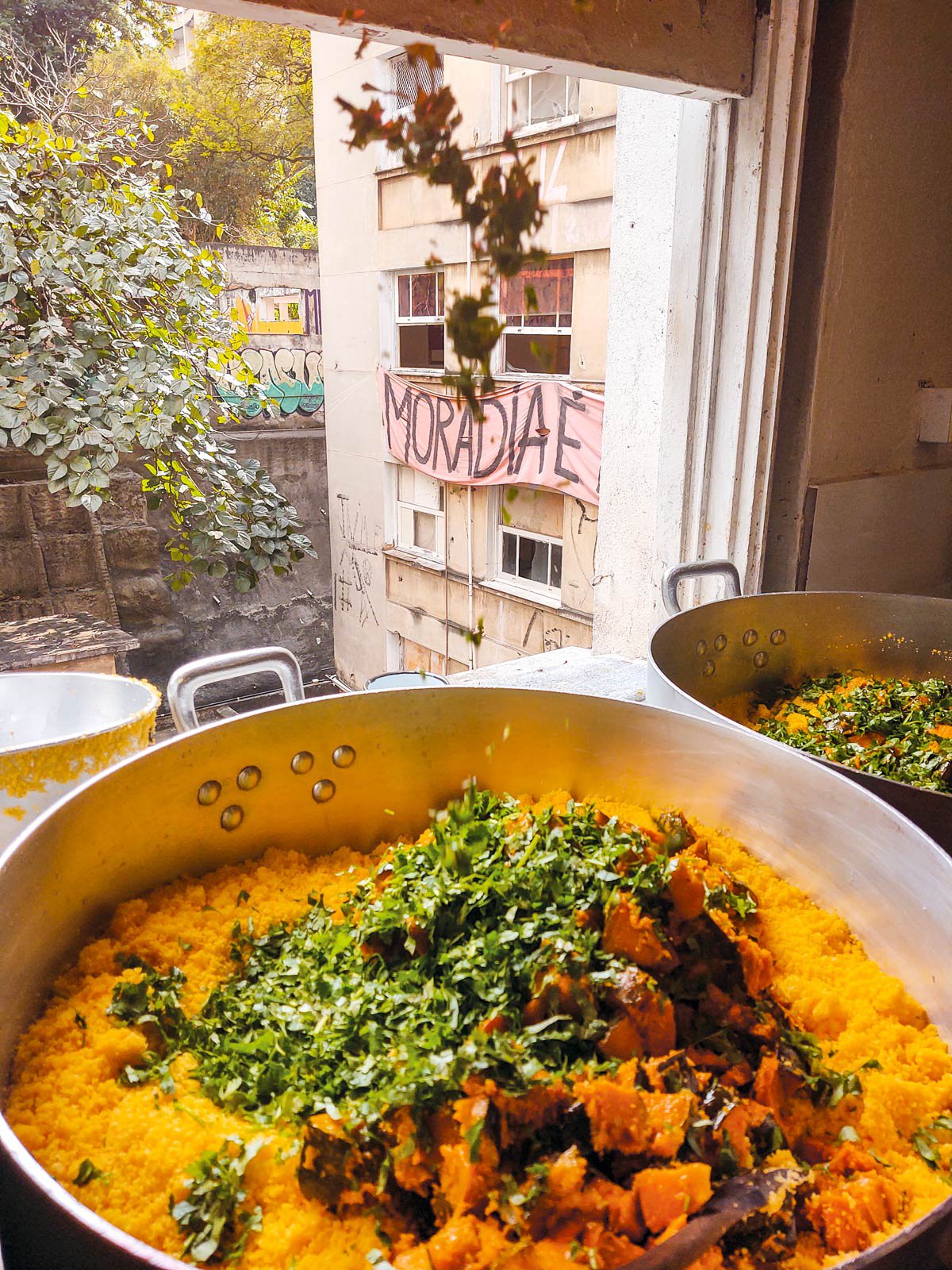