The healing properties of the sun, thought to be a cure for tuberculosis, influenced Modernist medicine, literature and architecture. Are there lessons to be learned from a moment in history marked by a unique health crisis?

In 1920, the writer Katherine Mansfield was being treated for tuberculosis in the south of France, and she wrote to her husband: “If I live here much longer I shall become a bush of daphne or you’ll find no one to welcome you but a jasmine. Perhaps it’s the effect of receiving the Sun every morning - très intime - the lady clad only in a black paper fan.” Mansfield had been prescribed a “sun cure” by her doctor; she was to sunbathe every morning and benefit from its supposedly healing properties.

In the late 19th century, the development of bacteriology led to an interest in the curative potential of sunlight, the antibacterial properties of which had recently been discovered. Doctors prescribed sun baths and both hospitals and homes were designed to make the most of this free and transformative resource. Although this medical obsession with the sun was relatively short-lived, its impact on the culture of the era was significant, and its legacy can still be traced in western architecture.

For many modernist writers such as Katherine Mansfield and DH Lawrence, illness and its attendant cures were an integral part of everyday life. Both writers were diagnosed with tuberculosis, one of the most common diseases of late 19th century Europe, and consequently spent much of their later years seeking out places where they could attempt to “take a cure”.

These experiences inevitably filtered through to their writing. Dr Kirsty Martin, a senior lecturer in English literature at the University of Exeter, UK, has explored the “medicalisation” of sunlight in the late 19th and early 20th centuries, tracing its impact through the literature of the time. She draws attention in particular to DH Lawrence’s 1928 short story, Sun, which charts a young woman’s experiences of heliotherapy, apparently prescribed to her as a cure for post-natal depression.

In typically Lawrentian style, the woman begins to see the sun as a male lover, “penetrating” her with its rays and opening the “lotus flower” of her womb. Under the cloak of being told from the woman’s point of view, Lawrence’s story cannot escape the male gaze, sexualising and objectifying both the woman and the plant through its use of the long-standing reductive association of female reproductive organs with the waterlily flower. Nevertheless, the imagery reflects Mansfield’s description of “receiving” the sun in an intimate state of undress.

Further echoing Mansfield’s letter, Lawrence’s story is full of gorgeously weird imagery in which the woman feels as if she is turning into a plant: “She reached and put leaves over her eyes. Then she lay again, like a long gourd in the sun, green that must ripen to gold. She could feel the sun penetrating into her bones; nay, further, even into her emotions and thoughts.” Lawrence’s story puts a carnal twist on a widespread belief in the healing powers of the sun, which was thought to permeate the body like an X-ray (a new and much-discussed technology).

It’s intriguing that both Lawrence and Mansfield present imagery of humans being changed into plants through the transformative power of the sun. It’s perhaps a reference to Ovid and the stories of Daphne, Clytie, and Leucothoe - young women who were metamorphosed into trees and flowers because of their relationships with the sun gods Apollo and Helios. Of course, plants have a vital relationship with the sun and will only flourish healthily when they have access to enough light; Lawrence and Mansfield seem to conceive of sunbathing as a sort of human photosynthesis in their writing.

Moreover, there is perhaps something about the static nature of being ill and taking a sun bath that suggests an inherent kinship with the plant world. As Virginia Woolf put it in her 1925 essay On Being Ill, when we are sick, “we cease to be soldiers in the army of the upright; we become deserters. They march to battle. We float with the sticks on the stream; helter skelter with the dead leaves on the lawn, irresponsible and disinterested and able, perhaps for the first time in years, to look round, to look up - to look, for example, at the sky”. For Woolf, as for Mansfield and Lawrence, the experience of being ill echoes the perceived passivity of the plant; but they also find a lively passion and an attentiveness to the nonhuman world in this vegetal state.

Leaving the “army of the upright” and lying still in view of the sky and the sun were key factors in the containment and cure of illnesses such as tuberculosis in the early 20th century. Without antibiotics to treat the infection, convalescence and seclusion were deemed essential. Sanatoriums were built in sunny locations with fresh air in the mountains and on the coast, where patients retreated for long stretches of treatment.

A new mode of architecture began to appear, taking into account cutting edge medical discoveries about the benefits of quarantine, fresh air, and sunlight. In the late 1920s, architect Alvar Aalto designed the ground-breaking Paimio Sanatorium in Finland with contemporary health practices at its heart: wipe-clean surfaces in enamel and chrome, airy rooms, roof terraces, and large windows for sun cures. Even the door handles were carefully designed to save doctors from catching their sleeves on them. In his preliminary sketches for the building, Aalto presents patients lying in bed as the sun’s rays radiate into the sick chamber; it was to be a perforated building where interior and exterior were intimately linked.

As Beatriz Colomina, author of X-Ray Architecture, explains, modernist sanatoriums weren’t simply traditional buildings with added balconies, but rather a radically new way of imagining the building as a functional platform for a series of sun terraces, which were at the centre of tuberculosis treatment programmes. Colomina describes this shift as the transformation of the building into a “solar device” for healing.

The sanatorium was a place where patients spent long periods of time convalescing; it became their home. In the Modernist era, the line between home and hospital was blurred; for example, the vast majority of people were born and died in their own homes, in sharp contrast with western norms today, where hospitalisation is the rule rather than the exception for beginning- and end-of-life care. For wealthy westerners in the early 20th century, however, hospitals were often seen as places to spend the winter months, with their own social scenes and beautiful settings. For the poor, on the other hand, hospitals were often out of reach and much medical care took place within the home and within the community.

Modernist designs for healthcare facilities quickly spilled over into designs for homes and everyday living. Furniture designers took inspiration from hospital furniture intended for reclining and recuperation; the Adirondack chair, for example, was originally intended for convalescent tuberculosis patients in the facilities that dotted the Adirondack mountains. Houses designed by modernist architects borrowed the large windows, roof terraces, and expanses of chrome, tiles, and glass from the sanatorium, aiming to create healthy homes that would break away from the dark, stuffy houses prevalent in disease-vulnerable Victorian cities.

Stairwell of Paimio Sanatorium - with large windows that invite the outside in. (Photograph Maija Holma © Alvar Aalto Foundation).

‘The sanatorium was a place where patients spent long periods of time convalescing; it became their home.’

Le Corbusier, for example, installed a hand -washing sink outside the front door of his iconic Villa Savoye, designed in 1929, as well as a sun terrace on the roof and enormous horizontal windows. Architectural historian Dr Julie Collins explains: “Le Corbusier stated ‘the sun is our dictator’ in 1933 in The Radiant City, an assertion reflected in his architecture, which was heavily influenced by Mediterranean buildings with their cubic forms, flat roofs and whitewashed surfaces.”

Modernist houses were designed to be transformational, radically reforming the principles of architecture and refiguring the relationship between inside and outside, public and private, home and healthcare. Although the crisis of tuberculosis was eventually solved, in the western world at least, by the advent of antibiotics, its impact on architecture made an indelible mark.

Today, the medical profession has a mixed relationship with light. Its benefits in terms of vitamin D, as well as the benefits of being outdoors, are widely recognised, and artificial light is used to treat certain skin conditions as well as Seasonal Affective Disorder. However, too much sunlight can have negative impacts on people of most skin colours, especially in the context of the ozone layer damage over Australasia.

In recent times, however, it has become clear that our architecture is no longer designed with the health benefits of fresh air, sunshine, and quarantine facilities in mind. There are some lessons to learn from this moment in history marked by a unique health crisis. But equally valuable, perhaps, is the kinship with the vegetal suggested by Modernist writers’ experiences of convalescence; many of us could benefit from choosing to leave the “army of the upright” for a little while, look round, look up, and get to know the view of the sky over our heads from the perspective of a rooted plant. 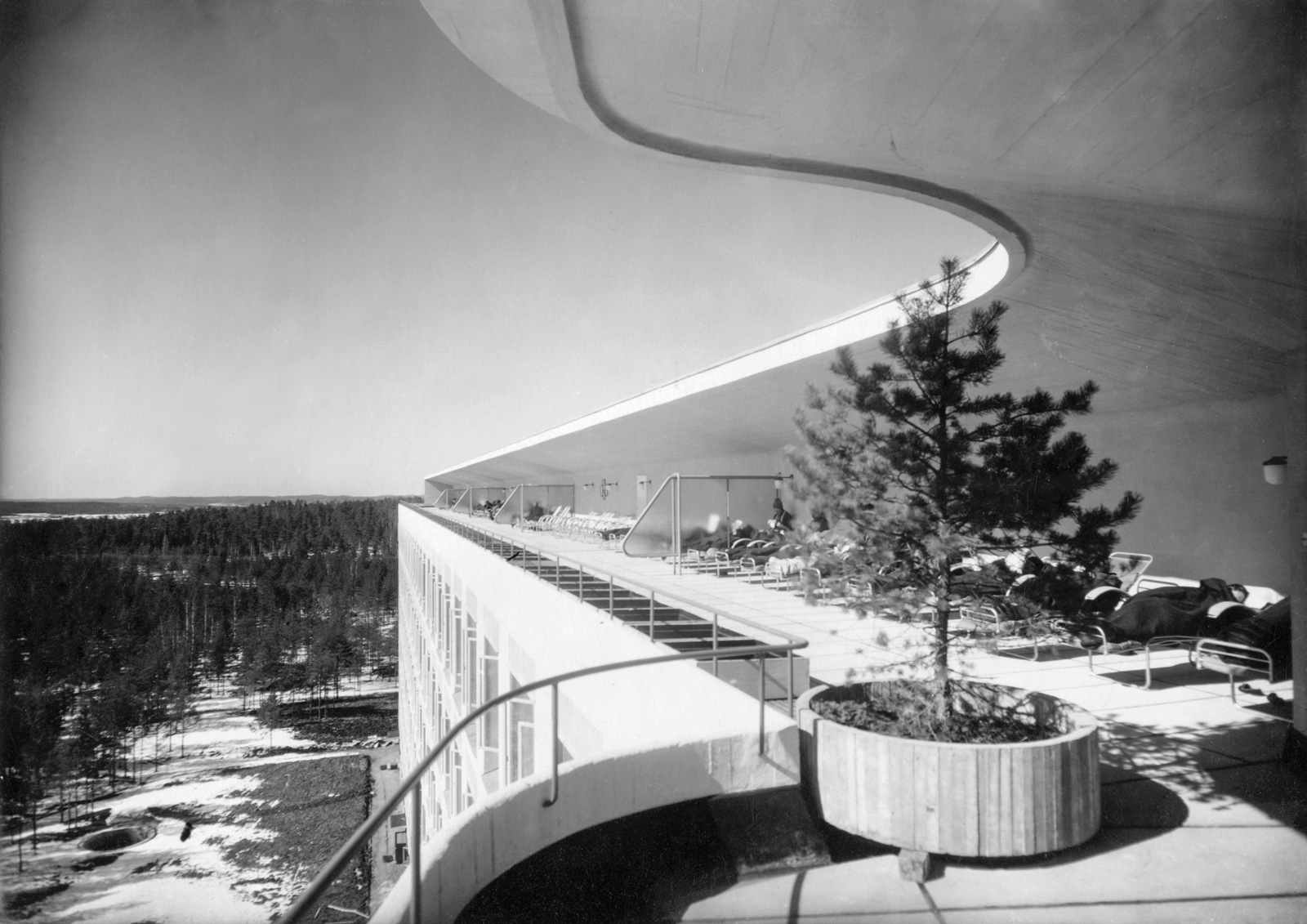 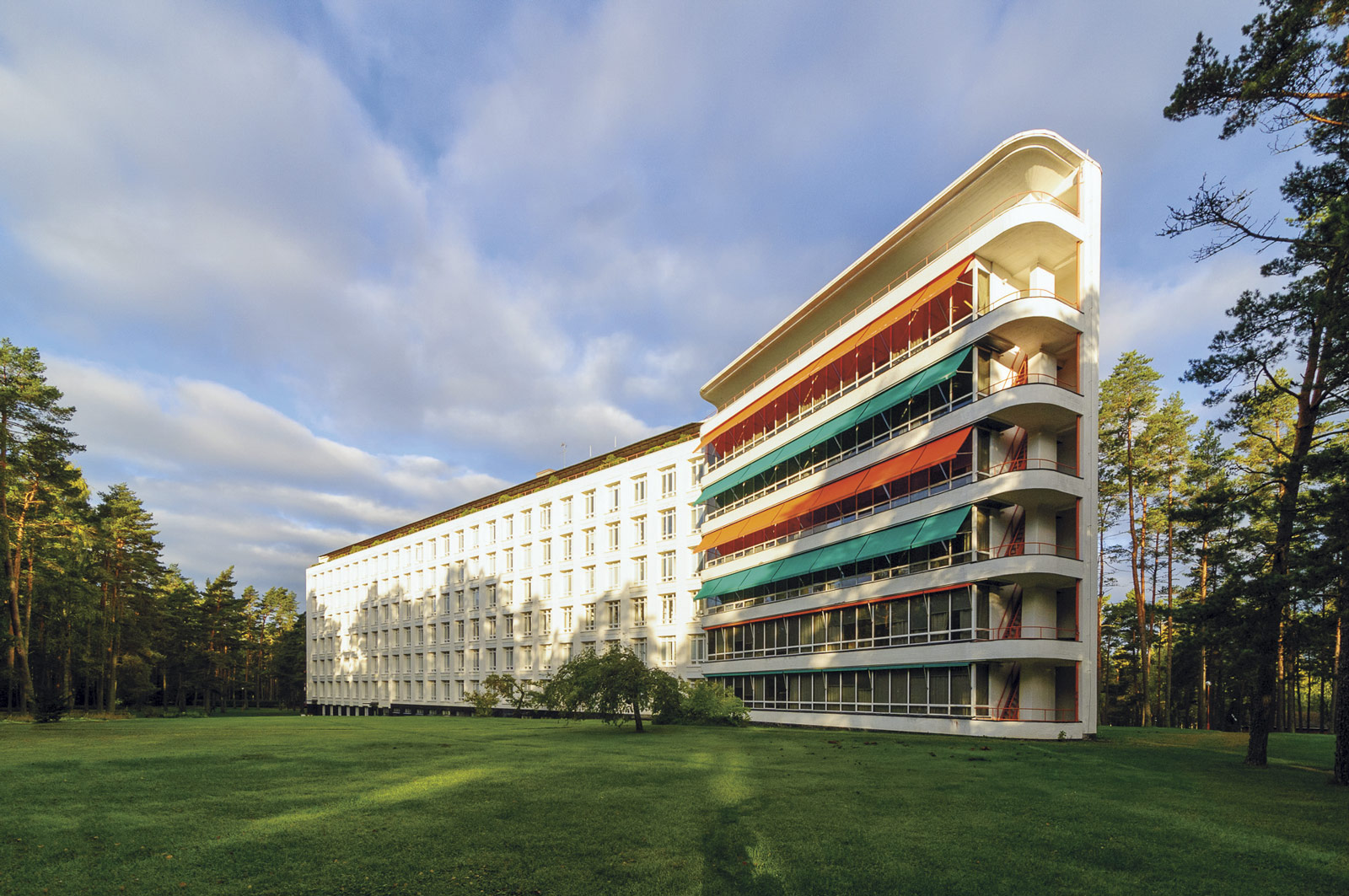 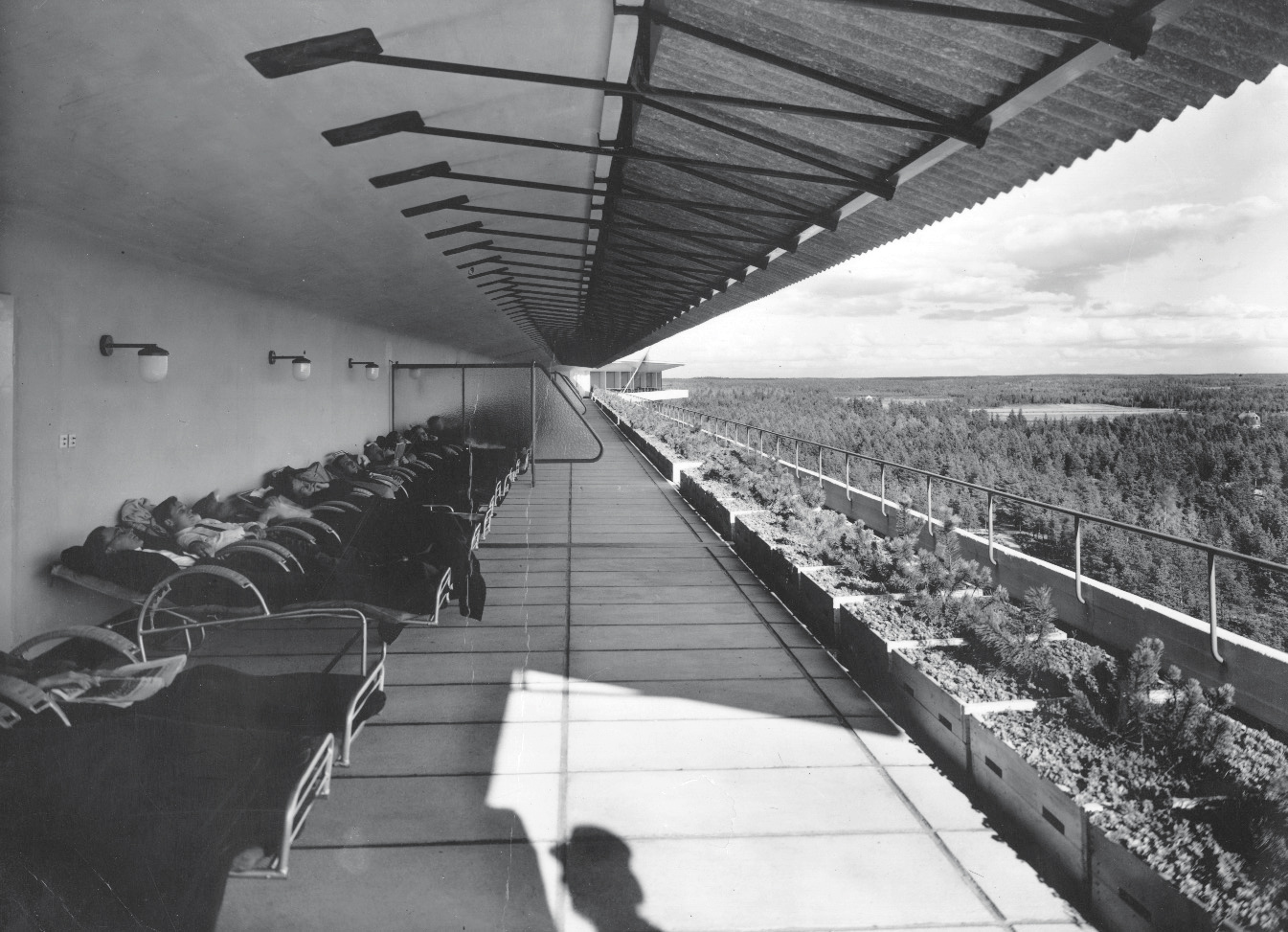 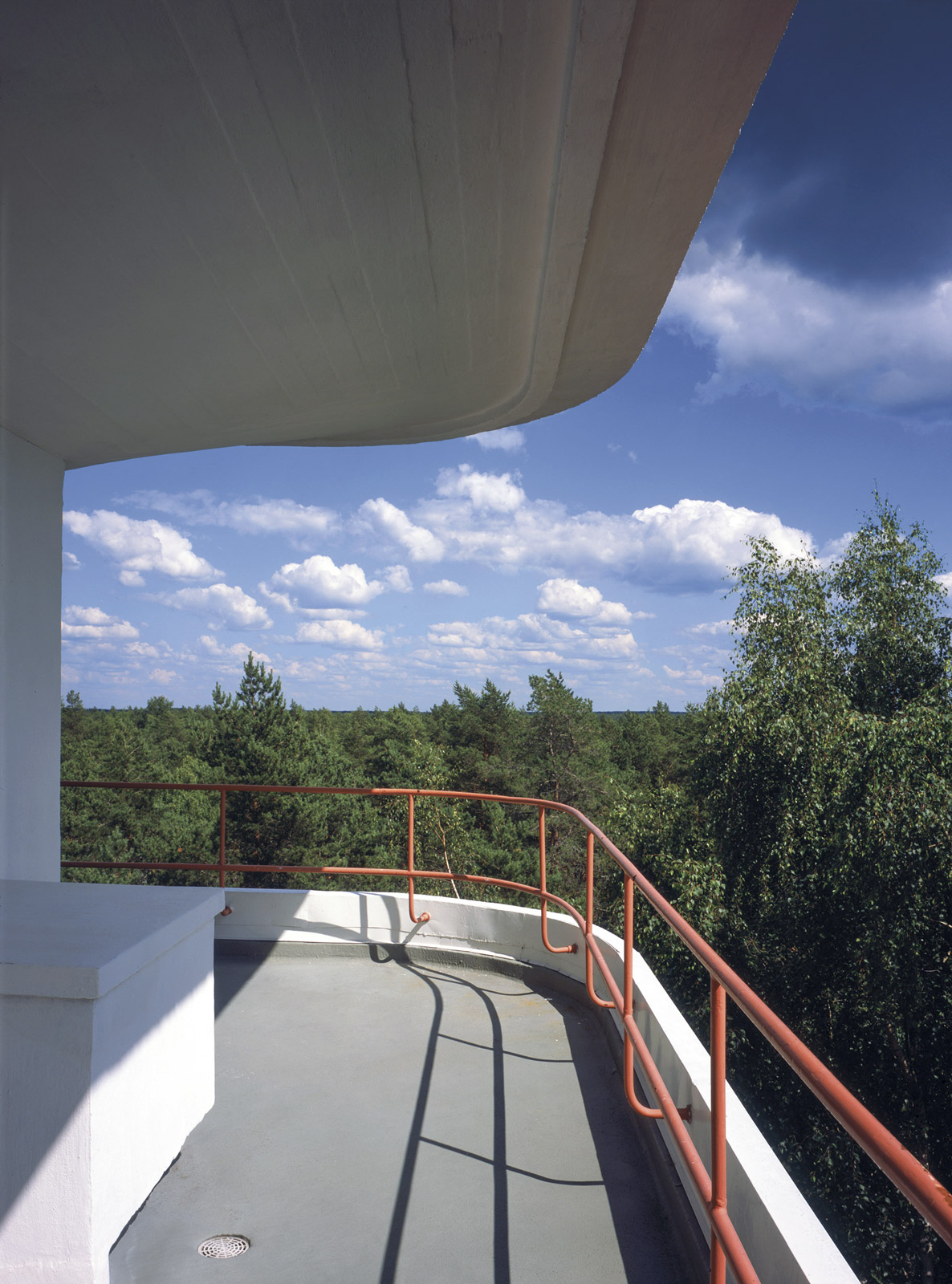 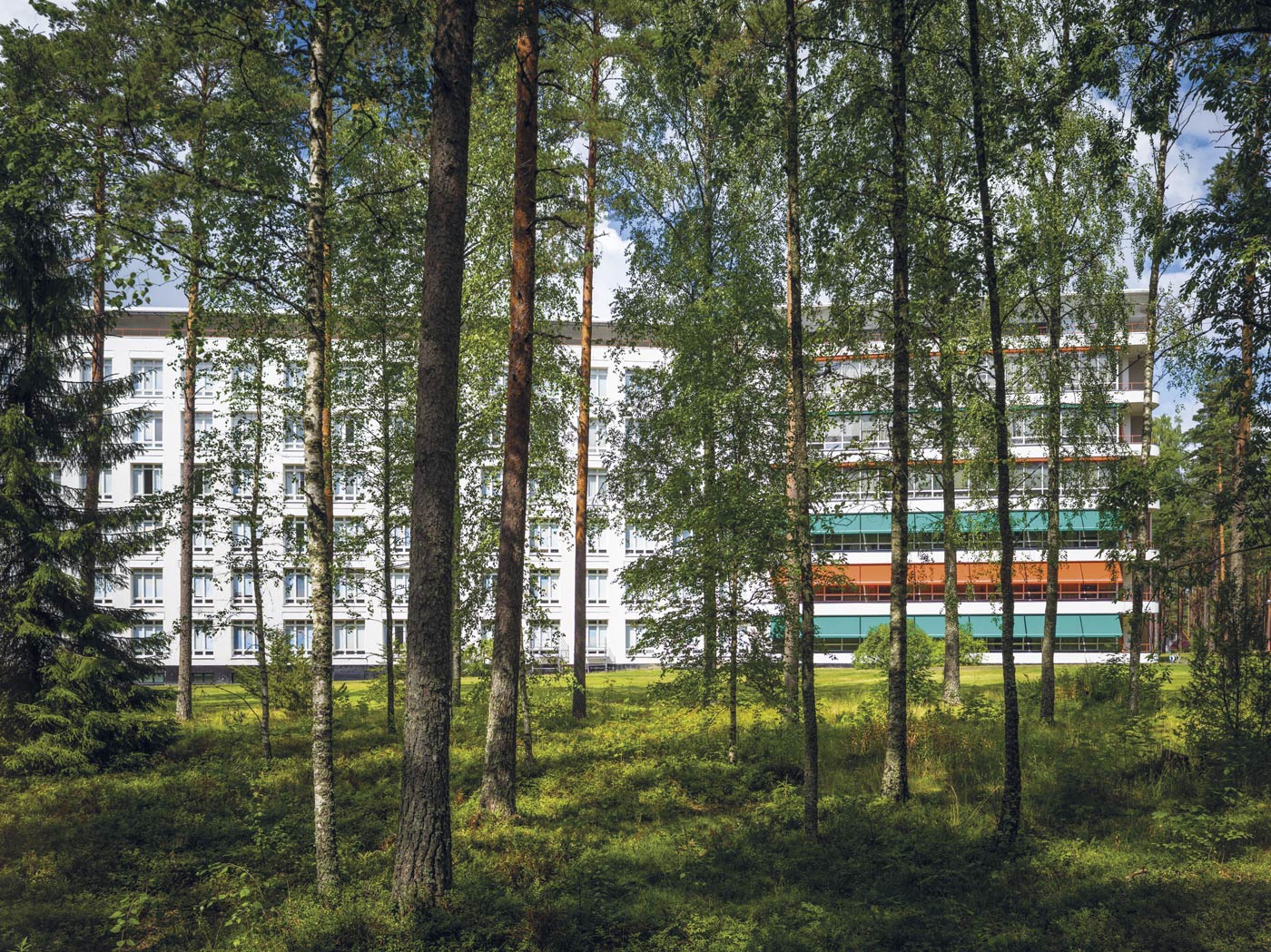 Stairwell of Paimio Sanatorium - with large windows that invite the outside in. (Photograph Maija Holma © Alvar Aalto Foundation). 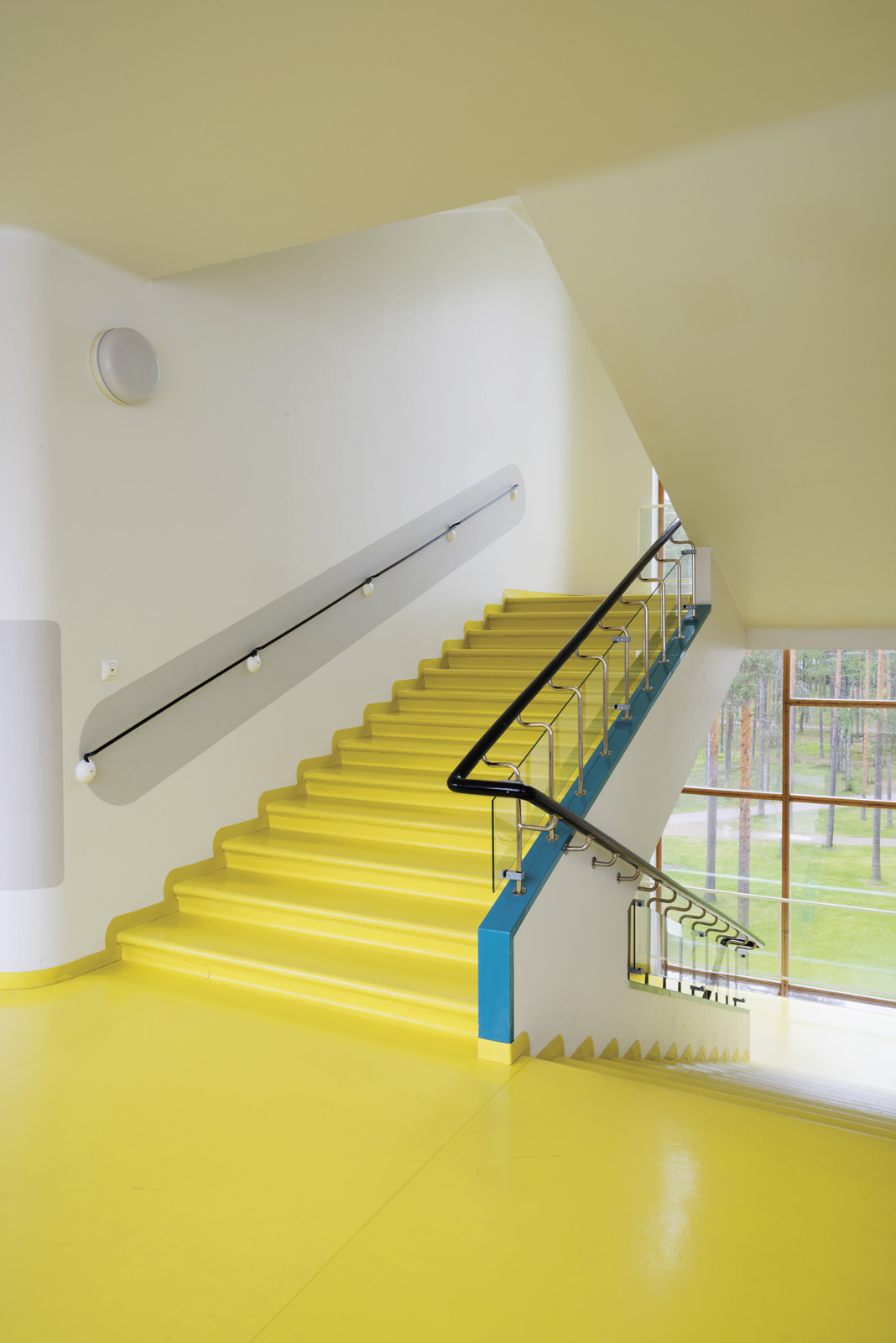 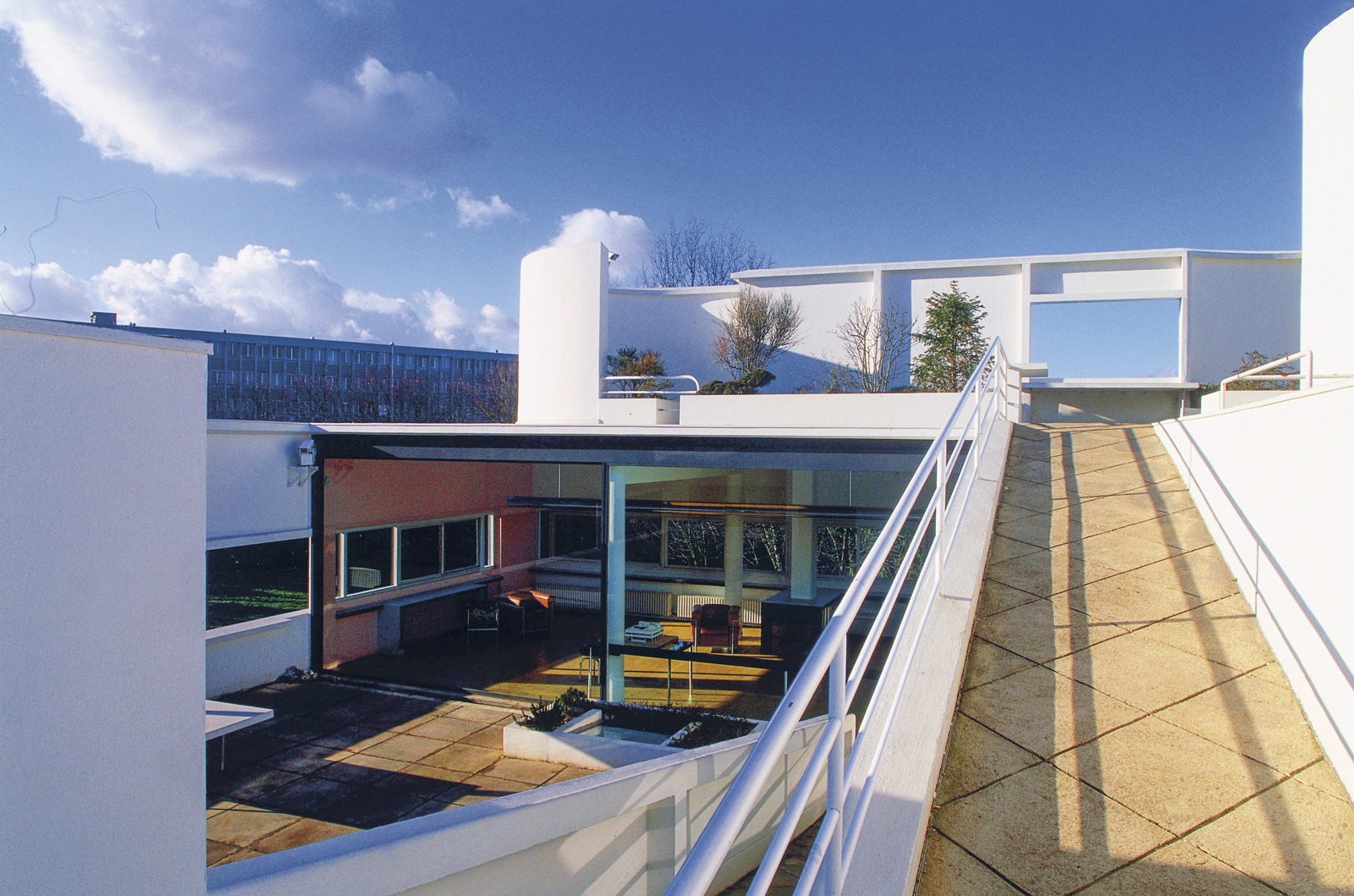 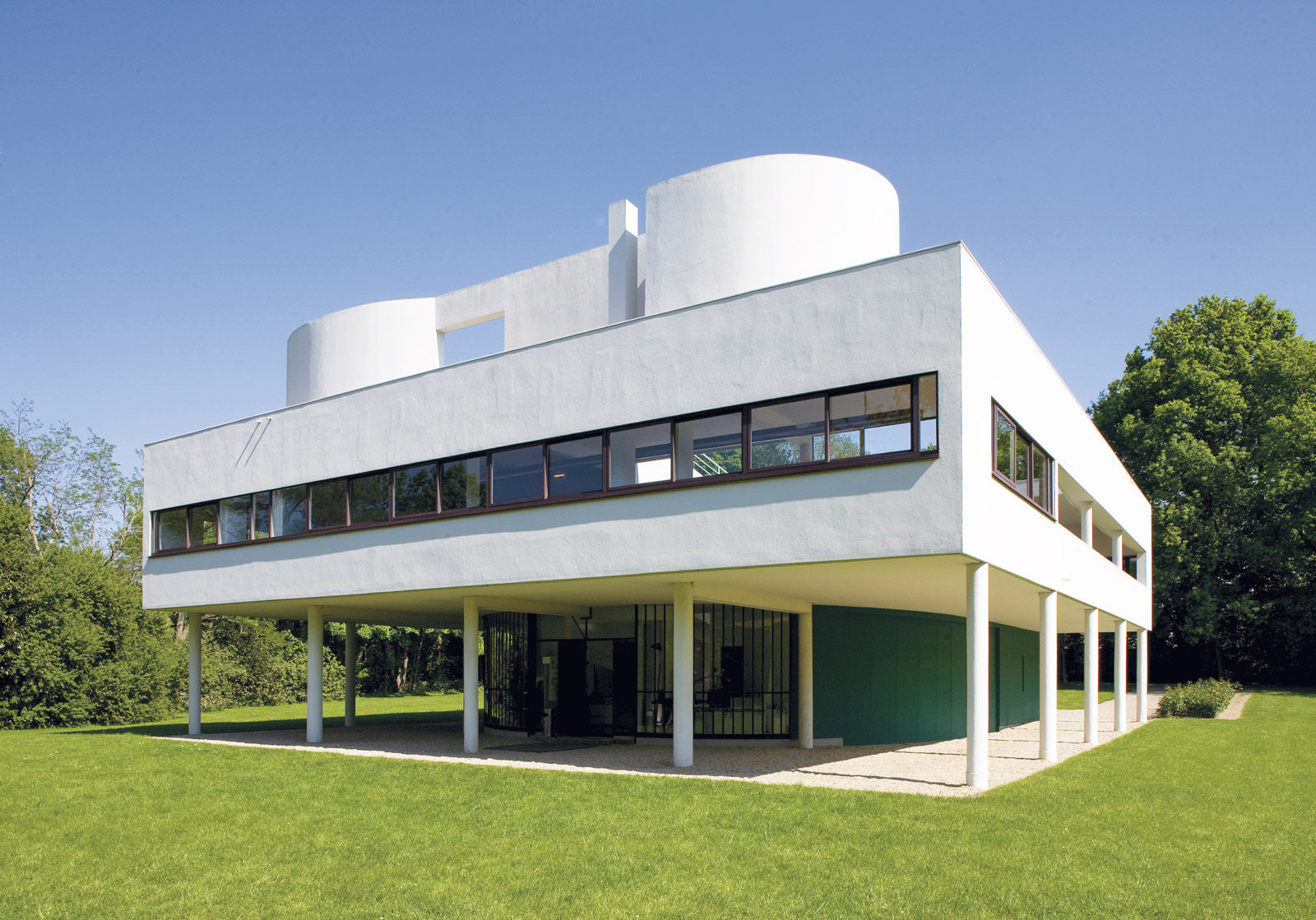 No Planet B
Words by Anna Souter 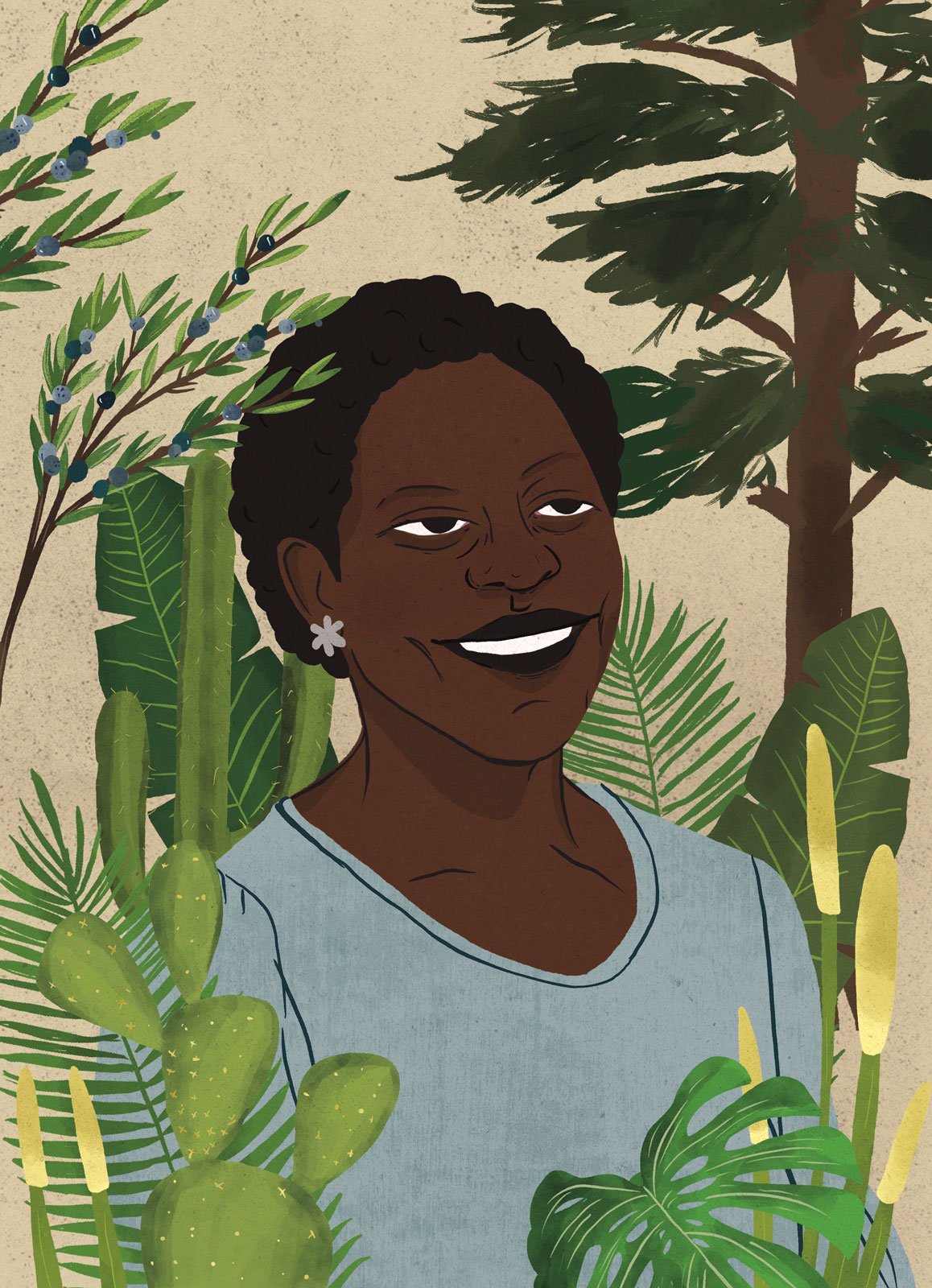 Obituary for a Coyote
Words by Anna Souter